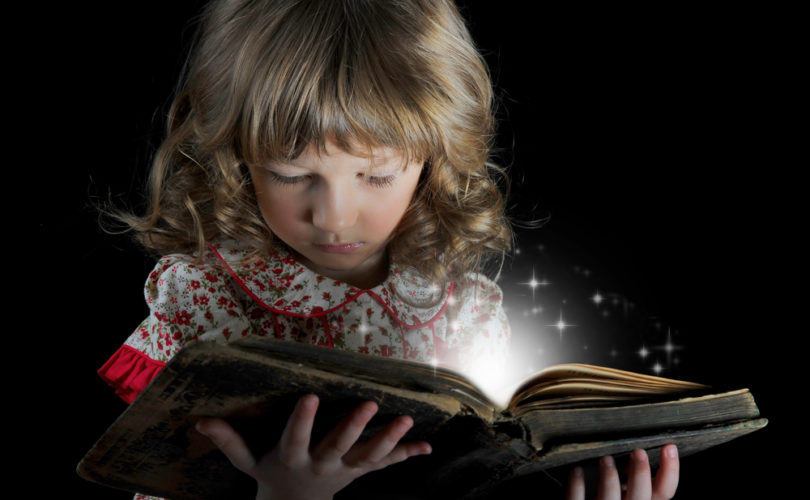 Why are feminists so determined to eradicate fairy tales? Why do they hate them so?

“Every time I think I can rest,” said the feminist professor at our department meeting, “I see a television program or a movie, and suddenly I know, they're back,” alluding to the little girl's wide-eyed fascination in Poltergeist, when the spiritual horrors return.

So, since they're back, she has once more to teach the course in Women's Studies that she wanted to cross-list in the English department. It is a course in fairy tales. Her aim was to expose their evil. We might consider her a feminist exorcist, driving the demons of sanity out of the heads of pliant and unsuspecting young women.

After she had made her pitch and left, I remarked that I found it odd that someone would teach a course in works of art which she held in contempt. And I insisted that fairy tales were works of art, folk art in fact, and that we should treat them with the respect with which we treat art in general. I asked the department to disapprove. Of course I was voted down. It is wrong for a boy to hit a girl, and that's that.

The fairy tales were passed along mainly by women, by mothers and nurses: they are the original old wives' tales. Many of them are tales of love, of the beautiful and virtuous girl winning out over the cunning and hardhearted.

They're pretty common, these feminist courses taught not for appreciation of fairy tales, but against them. And this requires some attention. The fairy tale, after all, is essentially the art of the common people. We find them wherever we find human beings, whether or not they have writing, whether they live in the Arctic or in the tropics, whether they hunt for buffalo or grow corn, whether they worship the one God or many. They are the common heritage of mankind. So it seems particularly gross, that some well-to-do professoressa, shielded and sheltered from the hardships of life that most human beings in most times and places have had to confront, should set about spoiling them. But then, campus leftism has always been a sandbox for the rich.

And there's a further irony. Who in particular passed along these tales of Cinderella or Snow White? Not primarily men. Men and boys pass along stories of men and boys, both the good and the bad. In the northlands they sang of the good warrior Sigemund and the blacksmith god Weland. In the Greek isles they sang of the implacable Achilles and the wily Odysseus. In Mesopotamia they sang of the bold king Gilgamesh who traveled to the realm of the immortals.

The fairy tales were passed along mainly by women, by mothers and nurses: they are the original old wives' tales. Many of them are tales of love, of the beautiful and virtuous girl winning out over the cunning and hardhearted. Many of them expose the ways of bad women, which women themselves would be in the best position to know of: the queen in Snow White, the stepmother in Hansel and Gretel, the sisters in Cinderella. Many of them show how a woman's true love can heal the suffering of men: as Beauty does for the Beast, and as Rapunzel does for the young prince. Many of them show how true nobility may be cloaked in homely garb; how one act of kindness can redeem a world.

Why would you want to cast aspersions on these?

The reason is obvious. Feminism is based on a pack of falsehoods, some of them mutually exclusive at that. Against the overwhelming and consistent testimony of every single culture that exists or has ever existed, feminists claim that there are no innate differences between men and women, but that all such have been inculcated in us by our societies – as if they all got together before the creation of the world and cut the same sinister deal. Well, it must have been some act of universal collusion, surely, since the odds against those thousands of cultures separated from one another in time and place all coming up with the same outlines of manhood and womanhood are beyond astronomical. No one will look at you askance if you remark upon the comparable difference in dogs, in whom the expression of maleness and femaleness must necessarily be severely limited – dogs, after all, do not enjoy a wide field of action. It is only men and women whom we must pretend to know nothing about.

Nothing, that is, until the clock strikes twelve, and then the feminist will claim that the differences between the sexes are so great, that only a woman can represent women, that there are political interests exclusive to women, that only a woman's virtues can save the world, and that some women absolutely must have other women for sexual partners. Then it is that the feminist becomes a silly flag-waver for the “first theologian” Eve. Original sin is a man's ploy; in a woman, it is her brave first rebellion against structures of patriarchy.

So the feminist will insist, having gotten to the Women's Studies Conference in an automobile every one of whose parts was invented by a man, made up of metal carved out of bowels of the earth by men and smelted in infernally hot foundries by men – and that is not to mention the oil and gasoline that men have drilled out of the plains or the bottom of the sea. And she drives there over roads paved by men, after they had leveled the hills and filled in the gullies, even blasting ways through solid rock; and most of those men, their backs shot by age forty, will never have made as much per hour as she does.

What she will not admit, though, is what her great-great-great grandmother knew. For a great many of those old wives' tales are about love. They form the imaginations of young people, and orient them towards one another, boys for girls and girls for boys. So the story of Cinderella falls like a healing balm upon our scorched souls; and boys learn to look for the true worth of a girl, and to be devoted to her no matter where he may find that treasure.

That more than anything else do they fear. For the lonely self-justifying divorcee cannot endure a wedding feast.

Why is Richard Dawkins scaring kids out of reading fairy tales?