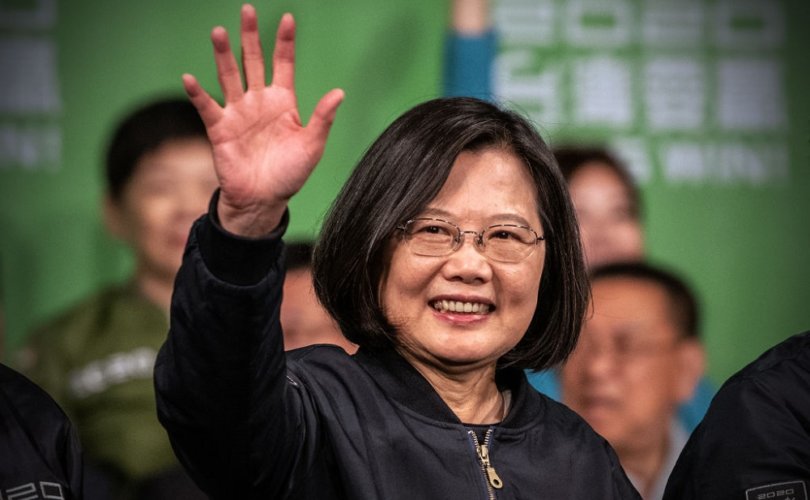 March 19, 2020 (LifeSiteNews) – In northern Italy, hundreds of elderly, denied ICU beds and ventilators, are dying. In Iran, the mullahs are digging mass graves the length of football fields. From all appearances, they will soon need more.

You might say that this was inevitable, since both countries have close relations with China, the original epicenter of the epidemic. And it is true that both have chosen to be key waystations in China’s New Silk Road, which Beijing touts as a highway to riches.

Right now, it is looking more like a one-way ticket to an early death.

But there is another country, far closer to China, whose economy is even more closely intertwined with the Communist giant’s. From that country’s capital, you can fly direct to every major Chinese city, including Wuhan. Until recently, thousands did every day.

Yet, despite this huge cross-border traffic with neighboring China, the 25 million people of this island nation are virtually free of the Wuhan Flu.

The country in question is Taiwan, which as of March 16 is reporting only 67 cases and one death. Most of those earlier infected have since recovered, and there have been few new cases. In other words, the deadly invader has been stopped in its tracks.

How is that even possible?

One reason is that the democratically elected government of Taiwan reacted to the widening epidemic in real time.

China first admitted to the World Health Organization that it had “several” cases of a new pneumonia on December 31. The very same day, Taiwan’s Centers for Disease Control began monitoring passengers arriving from Wuhan.

With China withholding information about the nature of the new pneumonia, Taiwan erred on the side of caution, screening passengers for no fewer than 36 known viruses.

When China shocked the world by quarantining one of its major cities, Taiwan reacted immediately, banning flights from Wuhan on January 26. It was the first country in the world to do so.

As the disease reached epidemic proportions in China and began to spread around the world, Taiwan put in place no fewer than 124 safety protocols for the virus.

To prevent community spreading, the government distributed 6.5 million masks to primary and secondary schools, along with 84,000 liters of hand sanitizer and 25,000 forehead thermometers. It required office buildings and residential complexes to screen entrants for signs of fever, and to put hand sanitizers next to elevators.

It took these actions even though it was not allowed — because of China’s opposition — to attend the World Health Organization’s emergency meetings on the Chinese Coronavirus. (This actually may have been a good thing, since the WHO has been covering up for China from the get-go.)

As everyone now knows, speed is everything when it comes to controlling epidemics.    Even a week’s dalliance can lead to uncontained community spreading of the virus. A month’s delay can be fatal to many.

Taiwan’s leaders, led by President Tsai Ing-wen, know from long experience that the Beijing regime is run by pathological liars who will always put their own political survival ahead of all other considerations, including the lives of those they rule. They saw in the Wuhan Virus a replay of the SARS epidemic of 2003, which China’s leaders lied about as well until the mounting death toll made it impossible to do so.

That experience caused the island nation to create strategic stockpiles of items that would be useful when — not if — a future epidemic emerged from China. And when it did, they did not hesitate. They acted.

Taiwan’s wariness where China is concerned is based on much, much more than Beijing’s irresponsible behavior during past epidemics. The Chinese Communist Party remains, as it has always been, an existential threat to Taiwan’s continued existence as a separate nation.

Communist leaders, including President-for-Life Xi Jinping, regularly threaten to use military force to annex the island. In fact, just a couple of days ago, he once more sent bombers to circle the island in a pathetic effort to intimidate the population there.

This is why Taiwan’s west coast is dotted with watchtowers. The Mainland is a mere hundred or so miles away and the watchers are always alert for the possibility of an invading Chinese army.

In this case, the invasion took the form of a tiny virus carried in the bodies of incoming passengers. But it was an invasion nonetheless and President Tsai acted immediately and successfully to repel it.

The rest of the world can learn an important lesson both from Taiwan’s wariness and its response.

The lesson is this: China is a threat to its own people and to the world. The threat takes many different forms, from China’s theft of intellectual property to its cheating on trade, from its rampant cyberattacks to its reckless spread of epidemics. But whatever form it takes on any given day, it is always inimical to liberty, and it is often deadly.

Taiwan understands this. And, understanding this, has repelled the latest threat to its nation and its people.

America needs to understand it too.