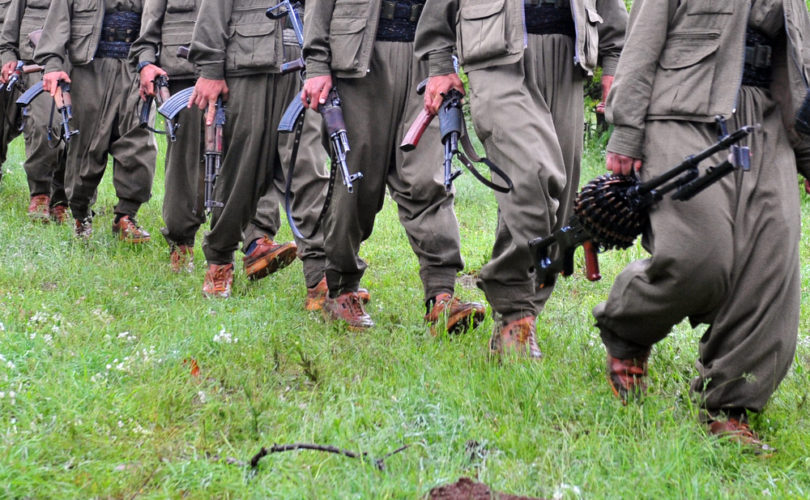 As I write, the headlines and my various news feeds are filled with images of some of the most loathsome barbarities we have seen since the end of World War II. thomas koch / Shutterstock.com

As I write, the headlines and my various news feeds are filled with images of some of the most loathsome barbarities we have seen since the end of World War II. The horrific images invading our internet space from Syria and (the country formerly known as) Iraq: Mass murders, crucifixions, beheadings – even of tiny children – torture, and systematic gang rapes; women and girls abducted en masse and sold into slavery; thousands chased out of their homes in terror, allowed to carry nothing with them; homes, ancient churches, monasteries and shrines looted and burned…

Beyond horrific, the images and the news they depict are bizarre and surreal, as though the violent chaos of the 7th century had burst insanely into a quiet Midwestern suburb. We are being shown, in graphic detail on YouTube, Twitter, Facebook and Google, some hint of what the Islamic conquest of those ancient Christian lands we now call the Middle East must have looked like. We are reminded now of the long centuries of darkness, of misery and oppression of non-Muslim indigenous populations by their Islamic overlords, that spurred Christendom to attempt their rescue in the Crusades.

We are close today to the 8th anniversary, September 12th, of the address given by Pope Benedict XVI at the University of Regensburg in 2006, in which he quoted a long-dead Christian emperor who was facing similar reports. About a week ago, an editorial writer for the Catholic Italian newspaper Il Foglio, Camillo Langone, wrote that the world owed Pope Benedict – and Emperor Paleologus – an apology over their reaction to that speech.

“Today, when the news from ex-Iraq is once more making history, and is showing to anyone who has eyes to see what the Koran translated into action truly is, they need to apologize to both of you.” But, Langone said, with obvious disgust, the modern secularized European “won’t do it”. Such a man, he wrote, “doesn’t believe in sacred texts…doesn’t believe in the Gospel.”

“For a European to believe that someone believes in religion is impossible… One who is no longer able to believe in God is not even capable of believing in reality, [and] does not even recognize a sword when it is pressing into his neck.”

Returning to that address with our current more graphic knowledge, it is hard to imagine a more mild response to Islamic extremism. Pope Benedict spoke about a discussion, a dialogue, “carried on – perhaps in 1391 in the winter barracks near Ankara – by the erudite Byzantine emperor Manuel II Paleologus” on the subject of Islam, the threat of which, in the form of the Ottoman Empire, was forcefully before him.

It is recorded that the Emperor, whom Pope Benedict described as “an educated Persian on the subject of Christianity and Islam,” asked, “Show me just what Mohammed brought that was new, and there you will find things only evil and inhuman, such as his command to spread by the sword the faith he preached.”

The pope noted that the comment was recorded sometime “during the siege of Constantinople between 1394 and 1402.” The pope also noted that the Emperor spoke with “startling brusqueness, a brusqueness that we find unacceptable.” But it is obvious that the emperor was also a man in a position to speak from personal experience.

Since his talk, Pope Benedict has heard the constant accusations, endlessly repeated by the western press, that his “offensive” remarks, his “blunder” about Islam, caused the violence that followed.

But what did he say? He called quietly for a return to the supremacy of reason in religious discourse, and he politely asked Muslims to abjure violence.

The smug western secular media, busy with their attacks on one of their favorite targets, failed to quote the rest of the paragraph. But there can be found the thesis not only of Pope Benedict’s lecture, but of Christianity’s real response to both the uncontrolled violence of Islamism and to our own intellectually impoverished pleasure-obsessed libertinism: reason and faith, “fides et ratio” and their harmonious collaboration to create a moral and just civil order.

“The emperor, after having expressed himself so forcefully, goes on to explain in detail the reasons why spreading the faith through violence is something unreasonable. Violence is incompatible with the nature of God and the nature of the soul,” Pope Benedict said.

How can this be happening in a “globalized” world? What has happened to our “global village”? Hasn’t modernity, with all its comforts and distractions, friendly, western secular Coca Cola imperialism, succeeded in civilizing everyone and taming the whole world?

He quoted Paleologus: “God…is not pleased by blood – and not acting reasonably (σὺν λόγω) is contrary to God’s nature. Faith is born of the soul, not the body. Whoever would lead someone to faith needs the ability to speak well and to reason properly, without violence and threats… To convince a reasonable soul, one does not need a strong arm, or weapons of any kind, or any other means of threatening a person with death…”

Given the images burning like acid into our minds now, how mild, how utterly calm and reasonable do the words now seem. And how plainly wicked the demands that he retract and apologize because of the “offence” they had caused Muslims: how feigned and deceitful, how self-serving the manufactured “outrage”.

When we can work up the nerve to look at these images coming from the new Islamic State, the new “Caliphate”, we are stunned and overwhelmed, and wonder if indeed this could possibly be happening in the age of near global market saturation of western consumables. How can this be happening in a “globalized” world? What has happened to our “global village”? Hasn’t modernity, with all its comforts and distractions, friendly, western secular Coca Cola imperialism, succeeded in civilizing everyone and taming the whole world?

One photo stands out this week, of a boy, about eight years old, reported to be the young son of one of the “Islamic State” terrorists, dressed in a blue Polo For Kids t-shirt, plaid checked summer trousers, what look like Birkenstocks and baseball cap, proudly holding up a decapitated head. Heads must be heavy, since the little boy needs two hands to hold it up by the hair. The Sydney Morning Herald, that carried the photo, with the boy’s face pixeled out, ran the caption, “A boy believed to be Australian Khaled Sharrouf’s son holds the decapitated head of a soldier.  From Khaled Sharrouf's Twitter account.” One does not usually imagine an apocalyptic dystopia featuring so many name brands.

In the face of this terrifying modern resurgence of the ancient threat, of such gross and unnatural barbarities, it is getting harder for western intellectual liberals to continue echoing the old mantras. The hard truth must be faced eventually, even by the most determined; not everyone in the world thinks the same way we do, holds the same values, has the same goals. Not every culture is of equal value. Not all men are equally “right” in what they believe.

And if the message of the photos and videos were not getting through our thick western skulls, we have today a direct warning from the leader of the ancient Christian community that has been decimated by ISIS. The Chaldean Catholic Church traces its heritage to St. Thomas, the doubting Apostle of Christ. A few days ago, we all saw the headline saying that, for the first time in 1600 years, Mass was not being said in the ancient Christian town of Mosul because all the Christians, all the Chaldean Catholics, had been either killed, expelled or kidnapped, to be sold later into chattel slavery.

Speaking from his exile in the dubious and perhaps temporary safety of the northern Iraqi town of Erbil, the head of this lost and grieving community, Archbishop Amel Nona, the Chaldean Catholic Archeparch of Mosul, told us quite bluntly, and without the niceties required by Pope Benedict’s civilized academic audience, that the time for indulging our comfortable liberal fantasies is over.

“Our sufferings today are the prelude of those that you, Europeans and Western Christians, will also suffer in the near future,” said the archbishop in an interview with Corriere della Sera. “I lost my diocese. The physical setting of my apostolate has been occupied by Islamic radicals who want us converted or dead. But my community is still alive.

“Please, try to understand us. Your liberal and democratic principles are worth nothing here. You must consider again our reality in the Middle East, because you are welcoming in your countries an ever growing number of Muslims.”

He warns us, “Also, you are in danger. You must take strong and courageous decisions, even at the cost of contradicting your principles.”

Erbil is 55 miles east of Mosul, in territory currently holding off IS attackers, but it is certainly in their path. Corriera della Sera reports that the bishop has asked for material aid for the exiles huddling in shock there. “8,000 people, many elderly, a disproportionate number (for us Westerners) of children, babies of a few months, many dehydrated with diarrhea. A septuagenarian asks for insulin. Others write on scraps of crumpled paper the names of medicines that nobody knows where to find.

“Tens of rusty wheelchairs were donated by humanitarian organizations for the sick and are used as chairs for the old. The local Christian organizations together with UN agencies have improvised a canteen service that distributes white rice, bread, bottled water. The toilets are almost useless.”

The archbishop continues: “You think all men are equal, but that is not true: Islam does not say that all men are equal. Your values are not their values. If you do not understand this soon enough, you will become the victims of the enemy you have welcomed in your home.”