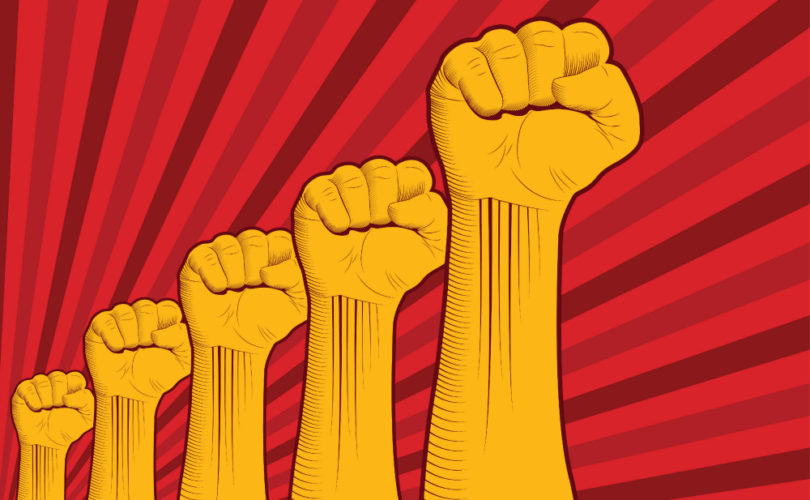 I'm not afraid of being on the “wrong side of history” on gay “marriage”; I've been there before. I spent the first part of my life being told that the global triumph of Communism was “inevitable.”

“The supreme art of war is to subdue the enemy without fighting” – Sun Tzu, The Art of War.

Among the stratagems employed by the cultural Left to discourage, dispirit, and dissuade the plurality of culturally sane Americans from opposing same-sex “marriage” is the all-encompassing insistence that the fight has already been lost. The phrase of choice is that proponents of traditional marriage are on “the wrong side of history.”

With at least 5,000 years of Western civilization normalizing monogamous heterosexual marriage, and the American experiment with redefining marriage a mere 10 years old, it certainly seems like I'm on the right side of history – the long one…the one authenticated by every society that produced human flourishing.

But frankly, I'm not afraid of being on the “wrong side of history”; I've been there before.

I spent the first part of my life being told that the global triumph of Communism was “inevitable.”

According to Marxist apologists, the irreversible tide of Marxism was an historic and “scientific” reality. Karl Marx had devised a theory known as “Dialectical Materialism,” which claimed that all societies in history followed a predictable pattern resulting from the conflict between exploited workers (the proletariat) and their exploiters (the bourgeoisie). This interaction transformed primitive societies into feudal ones, then into capitalist nations, and ultimately, into communist utopias. The theory “proved” that mankind would evolve into the New Soviet Man.

This is the genesis of the political term “progressive” – progressives embraced policies that would “progress” society toward this evolutionary inevitability. Those who opposed socialism were branded “reactionaries” bitterly clinging to the past, who rejected modernity and wanted to “turn back the clock.” (Sound familiar?)

This historical arrogance was expressed in the 1961 Draft Platform of the Communist Party of the Soviet Union, which said, “[T]he epoch-making turn of mankind from capitalism to socialism, initiated by the October Revolution, is a natural result of the development of society…and it will be taken sooner or later by all peoples.”

So fervently did all Western intellectuals believe this idea that, when he exposed a Communist spy ring in 1948, Whittaker Chambers told Congress, “I know that I am leaving the winning side for the losing side, but it is better to die on the losing side than to live under Communism.”

Who could argue? Within one generation, Communism went from a beachhead in one nation to a worldwide empire of 17 established socialist nations encompassing more than one-third of the world's population. Marxists ruled national capitals from North Korea to Nicaragua and Vietnam to Zimbabwe, with Communist armies fighting from Chile to Guatemala.

In the 1980s, Marxist insurgencies seemed destined to sweep norte through Central America to the very borders of the United States. This view seeped into popular culture through such dystopian productions as Red Dawn, Invasion USA, and Amerika, which aired just two years before the Berlin Wall was torn down.

Until the very end, Communism's victory, its crushing and obliteration of all opposition, seemed certain.

The threat posed by Communism dwarfed anything presented by abortion, redefining marriage, and any other social issue combined. Marxism did not squeeze public prayer out of schools; it formally taught atheism and socialist ideology to children, dynamited churches, and murdered anyone who publicly proclaimed the existence of a God higher than the State. It did not seek to redefine marriage but to abolish the family, with all women held in common and all children raised by the State. Its promotion of abortion led to the greatest death toll of unborn children in world history. It did not seize tax files or intercept the e-mails of its political opponents; its all-seeing totalitarian apparatus herded them into forced labor camps where death was preferable to unthinkable torture. One of its former fellow-travellers, George Orwell, described a Communist future as “a boot stamping on a human face – forever.”

Those condemned to live under its reign of terror prevailed only because of their determination never to give up, their firm resolution to hold the line against the Bolsheviks wherever possible, and their tenacity in keeping their faith and the truth alive amongst themselves, especially through the samizdat press.

At the core of Communism's failure was the fact that it was built on a lie that fewer and fewer people were willing to humor, even under threat of execution. The toppling and killing of Romanian dictator Nicolae Ceausescu began during one of his interminable speeches, when one woman in the crowd yelled out, “Liar!” Soon, the crowd picked up the chant and chased him from power, ultimately sending him to his eternal reward.

Still, the tactic of presenting your extremist version of reality as inevitable – and ruthlessly crushing all opposition – won much of the world for much of the Twentieth Century. No sooner were these assertions disproved than were the exact same terms and arguments transferred from the economic realm into the cultural front. Communists learned that human beings won't give up their creature comforts for a workers' paradise – but they will cling to their sexual indulgences unto the death. They saw they could use this weakness to undermine the family, the Church, and any other intermediary institution that could stop the onslaught of the mammoth State.

Thus, their mantra that cultural devolution is “inevitable.” Their message to Christians is a mockery of a hymn: “The Strife is O'er, the Battle Lost.”

They are right, in a sense; history is rushing to its predetermined conclusion. That is the eternal reign of the Kingdom of Jesus Christ, thronged by His saints and angels who shall sing His endless praises forever. First, the world must pass through the dark night brought on by the Fall, the intense warfare between love and hate, and every act of cruelty, cupidity, and inhumanity preceding the Parousia.

The “progressives” are right that they are part of a grand historical drama but 180-degrees wrong about its ultimate outcome. They are progressing toward futility, destruction, and perdition.

But before Christ the King reigns, darkness must reach its apogee.

It may be that in the Left's cultural conquest of marriage, we are closer to 1917 than 1989, that a cocksure, opaque, malicious spirit is inexorably advancing rather than retreating. Those who defend the superiority of the natural family face social, economic, and (increasingly) legal censure. We have only the truth of science, human development, and children's social well-being on our side. And we must never tire of repeating it, whatever the outcome. But it is not hard to imagine that the worst is yet before us.

Where we stand in the mystery of iniquity and redemption is known only to their Master. But we may take to heart the words of the famed dissident Aleksandr Solzhenitsyn, who lived to see the fall of the Gulag Archipelago that once imprisoned him: “One word of truth shall outweigh the whole world.” And the words of another, greater Authority: “In the world ye shall have tribulation: but be of good cheer; I have overcome the world.”

Join us in the trenches. Make a donation to LifeSiteNews.com today (click here).