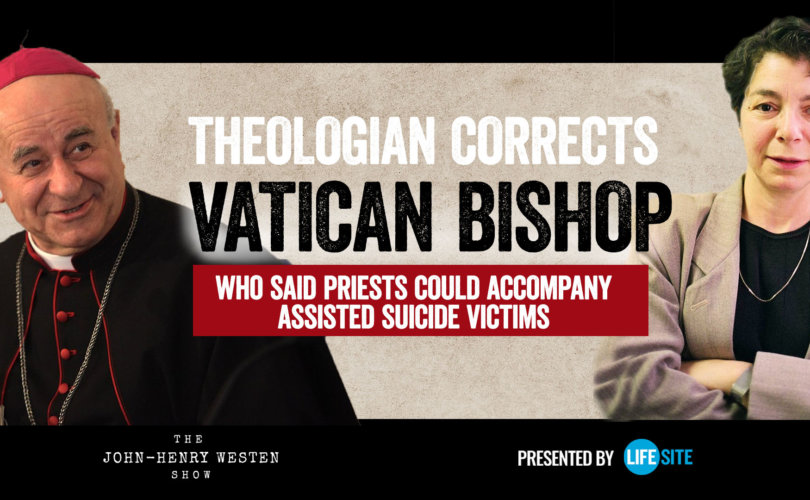 December 18, 2019 (LifeSiteNews) — Dr. Monica Miller is a theologian who teaches at Madonna University in Livonia, Michigan. A pro-life activist who’s been involved in the fight for the unborn since the 1970s, she spoke with me about Vatican Archbishop Vincenzo Paglia, who scandalously has said those who think Judas is in hell are “heretics” and that priests may legitimately remain at the bedside of someone undergoing assisted suicide in order to “hold their hand” and “accompany” them.

Dr. Miller is the head of Citizens for a Pro-Life Society. She said her first reaction to Paglia’s comments was that it is “theologically reckless” to say such things, especially because St. Augustine and St. Thomas Aquinas have said the opposite.

Paglia “blames the culture” rather than the individual, she told me. “Satan entered [Judas]…he sided with Satan!”

Dr. Miller also said that while Judas did have a certain level of regret and wanted to give the money back, he “failed” to open himself up to humility like Peter did when he sought forgiveness from Christ. Instead, Judas “committed the sin of despair” by killing himself.

Archbishop Paglia is the notorious chancellor of the new John Paul II Institute for Marriage and Family Sciences in Rome. He presided over the former institute’s demolition. In the past he has hired pro-contraception faculty, removed pro-life ones, and, in 2007, commissioned a homoerotic mural of himself being embraced by another man in his cathedral church.

Dr. Miller suggested that Archbishop Paglia “needs to go back to seminary” because the “hyper rush to emphasize compassion” these days is not doctrinally sound. It is “morally problematic” to hold someone’s hand who is killing themselves, she argued. It is as problematic as a priest or anyone to hold the hand of or support a woman who gets an abortion. Real accompaniment, she said, is supporting and helping someone who is suffering, not being complicit in their own death, which is an “act of disconnection.”

Dr. Miller and I then spoke about how Christ said it would have been better if Judas had never been born. I’ve said on many occasions that to claim that Judas is not in hell is to make Christ a liar. Dr. Miller agreed with me. Jesus often spoke about how souls are thrown into the fire of Gehenna, she said. She then called on the head of the Congregation for the Doctrine of the Faith to “make a correction” because it is “dangerous” that this sort of statement would be given by such a high-ranking Vatican official.