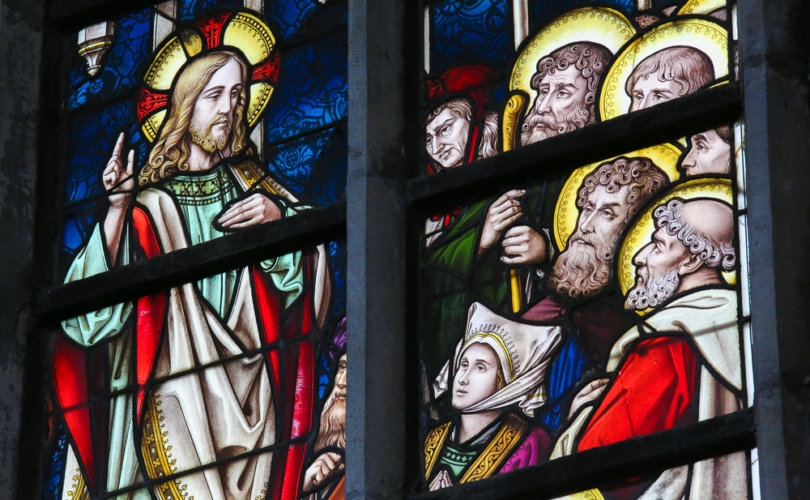 Stained Glass window in St Gummarus Church in Lier, Belgium, depicting the Sermon on the Mount.Shutterstock.com

July 25, 2019 (LifeSiteNews) – In the liberal press, it is taken for granted that “freedom of expression” is a basic human right that exists in sovereign independence from all prior personal, social, and institutional claims. This notion is adopted without hesitation by the liberal “Catholic” press and is followed as a matter of course by thinkers who dignify their dissent with the name of “progressive theology.” A perfect example of such dissent has recently been supplied by Hubert Wolf’s new book against clerical celibacy, as I discussed in a previous blog.

The theologian, however, as a member of the Church like any other, is obliged to follow her declared and settled teachings. He cannot elevate himself to an esoteric coterie of “higher critics,” a Brahmanic caste exempt from the duties resting on every servant’s shoulders. Insofar as the theologian wishes to speak on behalf of and instruct others in Catholic doctrine, he is twice obliged to conform his mind to hers—once in virtue of his baptismal vocation, and again in virtue of his work as a teacher. The Instruction on the Ecclesial Vocation of the Theologian states: “the theologian [with a mandatum to teach] is officially charged with the task of presenting and illustrating the doctrine of the faith in its integrity and with full accuracy.”

That so many theologians fail to live up to their solemn obligations indicates more about their lack of fidelity and responsibility than about the supposedly inflexible and arcane rules of the institution to which they profess a grudging adherence.

When theologians presume to qualify, explain away, or even contradict passages of Sacred Scripture as if they were its judges, not its servants, they strike directly at the root of their identity as Christians, and cease to be theologians except in name alone. For example, in contemporary theological circles it has become fashionable to question, and often to reject, every Scriptural teaching on sexuality, despite Our Lord’s proclamation of the indissolubility of marriage and the high dignity of consecrated virginity as well as St. Paul’s clear doctrine on the proper relation of the sexes and the objective moral evil of fornication and homosexual behavior.

Revisionist theologians act as if their critical opinions were “science” and therefore indisputable, and the Scriptures mere human documents, cultural artifacts subject to the same methods and assumptions as secular literature. This approach may truthfully be called sacrilegious because it does violence, or at least attempts to do violence, to the very word of God. The rock-like word will not suffer, but those who hurl themselves against it will suffer. Sacred Scripture as interpreted by the teaching Church is the permanent and ungainsayable measure of theological discourse. How well ancient and medieval theologians understood this principle may be ascertained by a study of Patristic homilies or scholastic treatises, where the first and last appeal is made to the Bible humbly accepted in its wealth of meanings.

Similarly, when theologians set themselves up as a court of appeals or review vis-à-vis dogma, they seriously misunderstand their vocation in the Church and do harm to the faithful for whose benefit they are supposed to act. For example, a theologian who states that Christ did not intend to institute the seven sacraments of the Church during His life on earth, or who proposes an explanation of the Eucharist that deviates from the dogma of transubstantiation defined at the Council of Trent, or who rejects the definition of the Mass as a true and proper sacrifice, or dismisses the practice of praying the Rosary, or counsels people that the use of contraceptives is not gravely sinful—such a theologian replays the role of Judas in Gethsemane, betraying Christ with a kiss all the more dishonorable for being justified by an appeal to “freedom of thought.”

Finally, when a theologian presents his opinions as though they were an alternative to the Magisterium, we can be sure we are in the presence of a fraudulent, not to mention arrogant, thinker. Such posturing amounts to a democratization of theological discourse. A democratic theology necessarily turns into a fascism of fashion, with the loudest and boldest self-promoters gaining the greatest following in the “marketplace of ideas.” Anyone who flatters the wishes of the unthinking crowd is sure to become a well-liked and well-groomed spokesman (or spokesperson) for their “demands.”

In a more subtle way, the same thing happens whenever bishops who are theologians—or who at least wish to be considered such—sing the siren song of dissent, on the pretext that they are installed over their flock with a divine right to slash and burn the traditions of their predecessors. What they forget (or what they hope the laity will forget) is that a bishop’s teaching is true and binding only to the extent that it harmonizes and coheres with apostolic and ecclesial tradition, and particularly with the doctrine taught authoritatively by councils and popes. When a bishop departs from this universal standard, he falls into private idioms and lowers himself to the status of a regional “reformer” whose words carry no more weight than the ravings of a Wycliffe, Hus, or Luther.

By laying rash hands on Sacred Scripture, by placing himself as a judge above the Magisterium, or by teaching independently of the Magisterium, the theologian negates his calling in the Church, which is to study, expound, and defend scriptural and magisterial teachings, in continuity with Catholic tradition.

The theologian has two choices: to serve humbly in his appointed capacity or to rebel against his place in the Body of Christ. In real life, the line between these two is not always sharply drawn, and individual theologians, depending on circumstances, may or may not be culpable for falling into error. The line is nonetheless real, and there can be no doubt that the vocation of theologizing has distinct and regulative boundaries within the community of believers.

Moreover, as the Church deepens in her understanding of the depositum fidei, it becomes less and less possible for theologians to excuse themselves on account of ignorance or undeveloped teaching; as the Magisterium declares the mind of the Church more and more fully, room for material heresy shrinks and the arena of formal or intentional heresy expands. In the words of Pope Pius XII: “It is true that Popes generally leave theologians free in those matters which are disputed in various ways by men of very high authority in this field; but history teaches that many matters that formerly were open to discussion, no longer now admit of discussion” (Humani Generis 19).

We should call out the hypocrisy of those who claim to speak in the name of “the people of God.” What they really mean is: when the majority of the laity are itching to dissent, we will gladly represent them; when they raise their voices on behalf of tradition, we will quietly disappear out the back door or make their work of restoration as difficult as possible. Surely anyone can see that a genuine theologian (not to mention a holy bishop) would do exactly the opposite, defending Catholic teaching “in season and out,” promoting an ardent revival of sacred tradition.