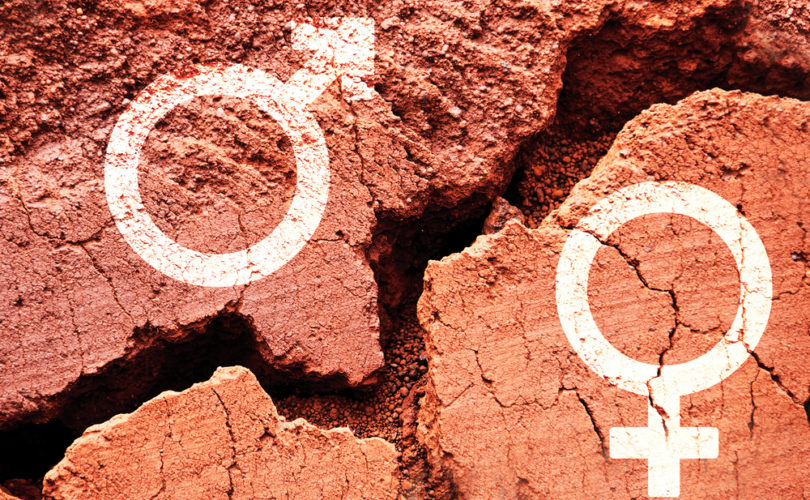 Symbols for male and femaleShutterstock

April 13, 2021 (LifeSiteNews) — A case is working its way up the hierarchy of courts in the U.S. to remove the exemption to the “selective service” draft currently enjoyed by women. The campaign for the autonomy and dignity of women has come a long way over the last couple of centuries. Not content with the laudable goal of allowing women to be admitted to universities and various professions, progressives now want them to be obliged to be blown to pieces in wars — if they are not captured and sexually abused.

Exposing women to sexual violence, indeed, is something of a theme among progressives today. The Los Angeles Times reports that California’s prison system is considering allowing biologically male criminals who identify as women to do their time in women’s prisons.

This has started happening in the U.K., and the results are entirely predictable. I recently wrote on LifeSiteNews about the progressives who want to make prostitution a career-option like any other, despite its being uniquely dangerous for women. I noted that the destruction of the special reverence society has for the “preciousness” of women is a key historical objective of feminism.

The campaign to extend the draft draws inspiration from the words of the late Supreme Court Justice Ruth Bader Ginsburg: “The pedestal upon which women have been placed has all too often, upon closer inspection, been revealed as a cage.” Violent death, torture, humiliation, sexual violation: All should be made available for women, who should ask for no special consideration.

Arguing against this is becoming harder with the progress of the “trans” debate. After fifteen months of “living” as a woman, “Eefje” Spreuters, a Belgian man, is seeking to join a convent. In law, the exclusivity of convents to biological females may well be protected in Belgium, as it is in many places, but in a test case, a judge in an employment tribunal in the U.K. declared that the view that an individual “assigned” to the male sex at birth should not be regarded as a woman after making a legal “transition” was “not worthy of respect in a democratic society.” He went on:

Even paying due regard to the qualified right to freedom of expression, people cannot expect to be protected if their core belief involves violating others’ dignity and creating an intimidating, hostile, degrading, humiliating, or offensive environment for them.

If this is so, then we can only conclude that laws allowing the Catholic Church to discriminate against “trans men” when assessing candidates for the priesthood, for example, are anomalous and perhaps incompatible with human rights, and a belief-system which demands such exemptions has no place in a civilized country.

At that point it will be too late to make a rational case against women being drafted into the military, or being ordained in the Catholic Church, because the category of women, in the sense of biological female, will no longer exist. It will be replaced by “gender” categories based on what people “identify as” which clearly won’t correspond to anything upon which a reasoned argument about sex discrimination might be based: That is, it won’t be reliably correlated with any non-arbitrary characteristics which might make “men” and “women” more or less suited to particular tasks.

The way has been prepared, of course, by a consistent refusal to consider such arguments over many years. The fire engines in my town here in England are currently emblazoned with an image of fire-fighters against a rainbow background. One of these is a young woman. I don’t doubt her sincerity, zeal, or skill, but at a glance she appears to be approximately half my weight, and I seriously doubt her ability to carry someone of my build to safety should he be overcome with fumes in a fire.

Here is an image of the same woman taken from their Facebook page:

The problem seems to have generated some confusion within the fire-fighting profession. The national Fire Service website details what appear to sensible physical tests, but adds:

Many fire and rescue services have changed the physical tests over the past few years and there now appears to be no set standard. Although at the time of writing this article, many have returned to the original tests as detailed above.

I wonder how that will play out. For now, at least, it is possible to find different tests applied to men and women for physically demanding jobs, and the same tests applied to biological males and females when competing in supposedly female sporting events.

To imagine this is inconsistent would be to misunderstand what is at stake. They are simply different routes to the ultimate objective of erasing biological sex as a concept. Women’s sports must be opened up to biological males, and male-dominated professions such as the military and the fire service must be opened up to women: if the opposite policies are needed to achieve these goals, so be it.