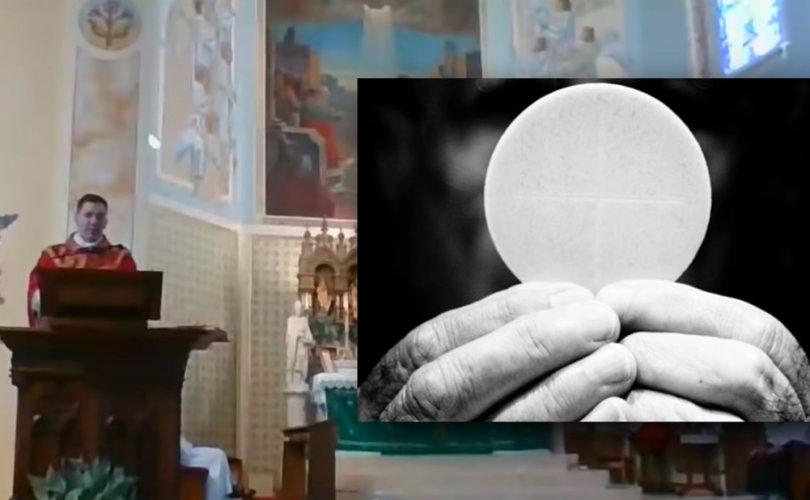 August 21, 2020 (LifeSiteNews) ― The coronavirus pandemic has separated men and women like nothing I have ever experienced in my lifetime. Within the clergy, this has been especially pronounced. It has been incredible to watch how very few real men there now are in our time among the Catholic clergy.

It is like a bright light has suddenly been shone on and into them and most have gone scurrying away out of fear of this and that and left their congregations without their shepherds and without the precious sacraments. Many closed up the churches even before government demanded them to do so. Very few have fought these unjust deprivations of our natural right and need to worship Our Creator.

I presume the same pattern has been occurring in most non-Catholic Christian denominations. I could never have imagined how many total cowards there are among the clergy until this pandemic began. However, it has been very encouraging for us at LifeSite to report the heroic defiance by several Evangelical congregations in California.

But then, there are also a small number of especially heroic, prophetic, giant Catholic priests who take their ordained role very seriously, some of whom are featured in the Complicit Clergy YouTube channel. Go there to listen to homilies of such a high caliber that I suggest most of you have never heard in your life. They are God’s gift to us out of this pandemic.

Their masses and homilies would never have been filmed but for the occurrence of the pandemic with millions of Catholics forced to worship remotely via their computers. If it were not for this I would never have heard of these priests.

You will be inspired, emboldened and encouraged that God has not abandoned His people and has left us with these wonderful prophets to guide us through our dark times. These are the real deal – shepherds who follow Christ no matter how hard the road, no matter what the consequences, no matter how much they are ridiculed and chastised by others who don’t really know who Jesus Christ is and what He really asks of us and especially asks of his priests.

One of the priests featured in Complicit Clergy is Fr. James Altman, who is pastor of St. James the Less Catholic Church in La Crosse, Wisconsin. I am not going to say a lot about him other than you MUST try to listen to as many of his homilies as you can. My wife Bonnie and I have never heard a priest preach like this man does and those homilies are especially suitable for the frightening and tumultuous times that we live in today.

I include the video of just two of his homilies in this article. There are many more at Complicit Clergy and on the St. James the Less website. This video is titled, “Persecution for speaking the truth.” It is about the absolute necessity of courage and joyfully enduring persecution for telling the truth. He tells us about many saints who did and experienced just that and his efforts to emulate them.

If you demand short, sweet sermons, then don’t bother listening to this Catholic prophet. You won’t like him. He keeps you occupied for more time than most clergy because he sees his role as a much-needed preacher of hard truths as is especially needed today.

He is a teacher, a true follower of Christ and he gives EVERYTHING that he has to his flock so that they might one day enter Heaven because of the great work that he puts into his daily preaching. Each day’s homily is long and full of teaching about the faith and about things going on in the world today. They are very relevant to what we are all going through right now.

Fr. Altman is a late vocation priest. He sounds a lot younger than he looks and is. He was a lawyer in charge of a large firm, as far as I can gather. He had many people under him whom he directed and whom he was responsible for.

He is humble, he is bold, because he knows Christ wants him to be bold. That is how to get people to take his message seriously. We are in deep, deep trouble right now, but the power of God’s grace overcomes all.

Here is another powerful Altman homily. Listen to him.

Another priest we often listen to is Fr. Richard Heilman of Roman Catholic Man. His homilies are very different from those of Fr. Altman. They are much shorter, but they are also wonderfully inspiring. He too relates his homilies to what is going on in the world today in order to guide his listeners through the fear and disorientation. Fr. Heilman is another fearless teacher and a Catholic warrior for souls.

And lastly, there is also Fr. Altier, another great preacher.