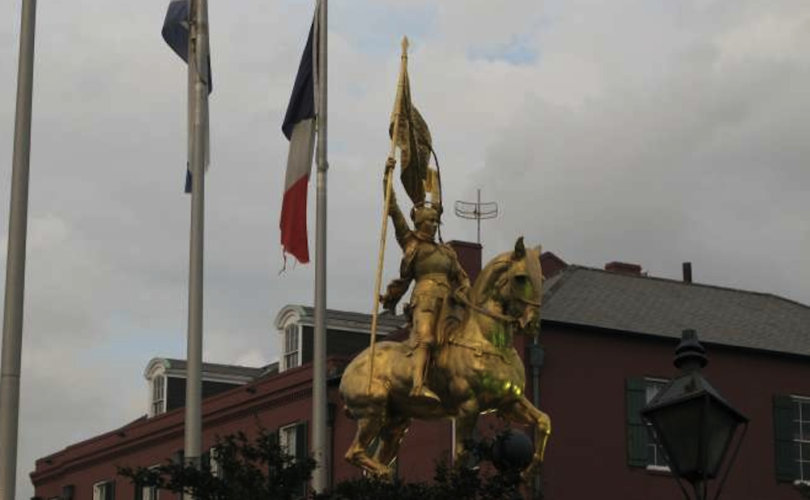 LOS ANGELES, California, August 24, 2017  (LifeSiteNews) — What do Abraham Lincoln, Joan of Arc, General Robert E. Lee, St. Junipero Serra, Christopher Columbus, and Supreme Court Chief Justice Roger B. Taney have in common? Each have had their statues defaced, removed, or serve as the centerpiece of national controversy during the past week.

The Junipero Serra statue, which stands in a Los Angeles park near the San Fernando Mission that he founded, is the most recent of the reported incidents.

The saint’s image was splashed with red paint with the word “Murder” in big letters written on his Franciscan habit. Serra’s arm rests on the shoulder of a Native American child, held close to the saint. Vandals allegedly painted a swastika on the boy’s head.

Where does it end?

“Where does this movement stop?” asked Marshall Connelly of Catholic Online. “While the public appears to be in a frenzy over controversial statues, St. Serra is a Catholic saint, and his statue is a religious icon. Of course, the non-religious do not appreciate this fact.”

Connelly continued, “There is a growing movement afoot to sweep distasteful moments and people out of history. While objective history is static, it is often clouded by time and perception. History is constantly being revised as political and social attitudes change. The heroes of one time and place are often villains in another.”

The question is, “where does the revisionism end? After the statues, what next? The names of streets, buildings, and cities? Should the money be reprinted to avoid any association with slavery? Should the Constitution be discarded or rewritten because its authors were slaveholders? And who will write the new one?”

Connelly asked the big question now on many minds. With the “statue of St. Serra vandalized, are Christian crosses next?

Junipero Serra was a Spanish Franciscan missionary who founded nine Catholic missions along the California coast in the 18th century. He was beatified by St. John Paul II in 1988. Pope Francis canonized him during his trip to Washington, D.C., in 2015.

Pope Francis said the Franciscan priest “(w)as excited about blazing trails, going forth to meet many people, learning and valuing their particular customs and ways of life. He learned how to bring to birth and nurture God’s life in the faces of everyone he met; he made them his brothers and sisters.”

“Junipero sought to defend the dignity of the native community, to protect it from those who had mistreated and abused it,” continued the Pope. “Mistreatment and wrongs which today still trouble us, especially because of the hurt which they cause in the lives of many people.”

According to the Baltimore Sun, “The vandalism comes nearly one week after city officials swiftly removed four controversial monuments: a statue of Confederate Generals Robert E. Lee and Stonewall Jackson, the Confederate Women’s monument, the Confederate Soldiers and Sailors Monument, and a statue of Supreme Court Chief Justice Roger B. Taney.”

The report continued, “Amy Kirk Duvoisin, the founder of the annual Joan of Arc parade that ceremonially pauses at the statue on the first day of Carnival season, says she's confused by the vandalism.

“If there's a bright side to the incident,” Duvoisin said, “it's that it's ‘an opportunity to teach about’ the teenage warrior who was burned at the stake in 1431.”