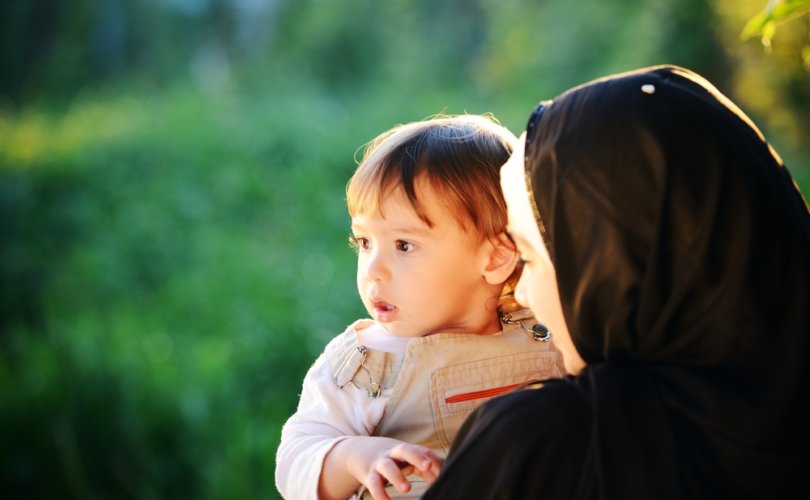 BAGHDAD, August 22, 2016 (LifeSiteNews) – For years, the abortion lobby has created a mythology that it is all-but-impossible for a mother to reject abortion in “the hard cases,” like rape. Forget that most rape victims don’t choose to abort their children, and most who do say the abortion was a mistake that did not bring them healing. But according to Planned Parenthood, young women lack the intellect, resources, and competence to raise their children in the United States.

For years, fundamentalist Islamic jihadists have forced non-Muslim Iraqi and Syrian women to become sex-slaves. The Voice of America had a story on Saturday about their plight.

They had been shunned for having sex with non-Yazidi men, even by force, until the leader of their community, Baba Sheikh, said the women should be welcomed back into society. But he added, “It is unacceptable in our religion to allow the birth of any children if both parents are not Yazidis.” Because of his decree, many women avail themselves of abortions which, though illegal under Iraqi laq, are not prosecuted under an “understanding” with the local authorities. The taxpayer-funded VOA continues:

Therefore, abortion is perceived as a solution. However, that raises two other problems: Abortion is illegal in Iraq, and not all women want to undergo the procedure.

The fact that “not all women want to undergo” an abortion is a “problem,” huh? That would certainly be a matter of perspective. Now we know the perspective of the Voice of America.

Despite being trapped between their Islamist sexual tormentors and banishment from their society, many Yazidi women have decided to give their babies life. VOA reports:

To Rezan Dler, a female lawmaker in the Iraqi Council of Representatives who has been working closely with the abducted Yazidis, cases of women who have been raped and want to keep their babies are not uncommon.

“A Yazidi woman who was pregnant for eight months when she escaped IS, she wanted to keep her baby, but her husband insisted on divorcing her if she refused to have an abortion. The couple finally separated. The woman is now living in a refugee camp with her 5-month-old child,” Dler told VOA, describing the circumstances of the Yazidi woman without disclosing her name.

In other cases, the Yazidi women have given their newborn children to infertile Kurdish couples, Dler said.

Some women are so resolute on keeping their children that “they’ve indicated they would rather stay under IS slavery if returning home meant losing their babies,” Dler told VOA.

The governor of Nineveh, Nofel Hamadi Akub, said there are at least 3,000 children of “unknown parentage” in his province alone.

Now, some may be using their pain to promote abortion, as they have with Boko Haram and the Zika virus. Dler goes on to speak of other legal aspects of the children’s upbringing before the article pivots to “the Iraqi law in the future” and whether lawmakers will find “a legal answer” to these problems. It is unclear from the writing whether she restricted the conversation to parentage and the children’s religion, or whether she was implying Iraq should legalize abortion.

What a tragedy if, after all these Yazidis; perseverance for life in the face of genocidal hatred, their suffering were exploited to further the reach of death.

You can read the whole article here.

I was brutally raped by a relative. I didn’t consider abortion for an instant.