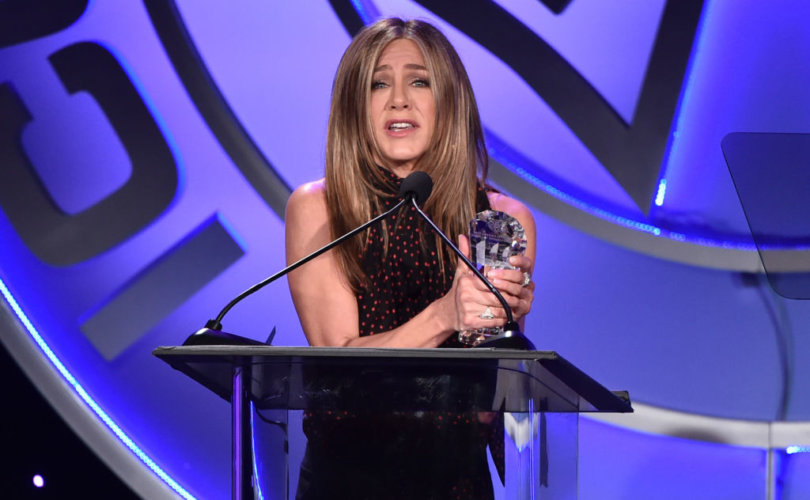 (LifeSiteNews) — As America’s abortion wars heat up, America’s celebrities are getting huffy. Despite decades of Planned Parenthood fundraisers, strongly worded social media posts, and stern warnings to red states, pro-life laws continue to pass. This past weekend, the brightest stars in Hollywood’s firmament let it be known once again that they do not approve of these new protections for children in the womb.

Jennifer Aniston, the Hollywood actress most famous for her role in the TV sitcom Friends, posted a screenshot from the show to her Instagram with the tired slogan: “I repeat … no uterus, no opinion.” Twitter hastened to correct her transphobic 1990s lingo by pointing out that progressives like herself are no longer supposed to say such things. The times have changed, and Hollywood stars are supposed to keep up. Aniston did, however, get full points for effort: The parents of the dead baby don’t really matter at the end of the day, as long as it is in fact dead and the government sanctioned the killing.

She wasn’t the only star to get in on the game. Oscar-winning actress Jennifer Lawrence, who is herself pregnant, attended the Women’s March in New York City carrying a handwritten sign reading: “Women can’t be free if they don’t control their bodies.” During the March, attendees yelled “Abortion! Any time! Any reason!” Lawrence, who was clearly showing her own pregnancy, apparently agreed with the sentiment.

Joining Lawrence was Amy Schumer, a 40-year-old alleged comedian. Her sign read simply: “Abortion is essential.” She didn’t specify what it was essential for (although most can guess), but she did post to her Instagram, noting that “I don’t have a uterus and she [Lawrence] is pregnant but we out here.”

Celebrities have been pimping for Planned Parenthood for decades, but the passage of the Heartbeat Act in Texas appears to have touched a particularly sensitive nerve. During a recent show in the state, singer Billie Eilish melted down, yelling to her fans: “When they made that s–t a law, I almost didn’t want to do the show, because I wanted to punish this f—ing place for allowing that to happen here.” The slogan “BANS OFF OUR BODIES” lit up the screens backing the stage, and she completed the rant by raising the middle finger and screaming: “My body, my f—ing choice!”

She seems nice. I’m sure Texas will miss her.

Other celebrities are attempting to push Hollywood into a repeat of the Georgia boycott, where Netflix, Disney, and other major companies threatened the state over their pro-life law. Actress Patricia Arquette suggested a replay. “We will not stop until women have full equal rights in every state in America,” she stated furiously. “We will boycott you. We will out organize you. We will strike you.” She was hazy on the details and nothing has been forthcoming, but Texas go the picture: Patty was very mad.

There were others, too: Reese Witherspoon, Alyssa Milano, Dua Lipa, Kerry Washington, Eva Longoria Baston, Pink, Elizabeth Banks, Chelsea Handler, Cynthia Nixon, and a bevy of B, C, and D-listers whose primary professional accomplishment was getting asked to sign the same protest document as their pro-abortion heroes. Hollywood spoke with one voice: Everyone should get to abort their babies. Presumably, there were people who cared.

I find these celebrity protests interesting mainly because I’m unsure of who the intended audience is. I’ve seen some of them at work before: I was in the crowd at the 2017 Women’s March in DC when Scarlett Johannsen and Michael Moore and a bunch of others told the crowd how essential feticide was to America’s survival, but nobody really got excited until Madonna started fantasizing about blowing up the White House within earshot of the White House. At that point, it was clear which clips from the stage were going to make the news.

But that’s what it took — because entertainers promoting feticide isn’t news. Abortion has been a tool of Hollywood studios for years, and dead babies have been the movie industry’s dirty little secret for nearly a century. Some things change — but Hollywood stays the same.