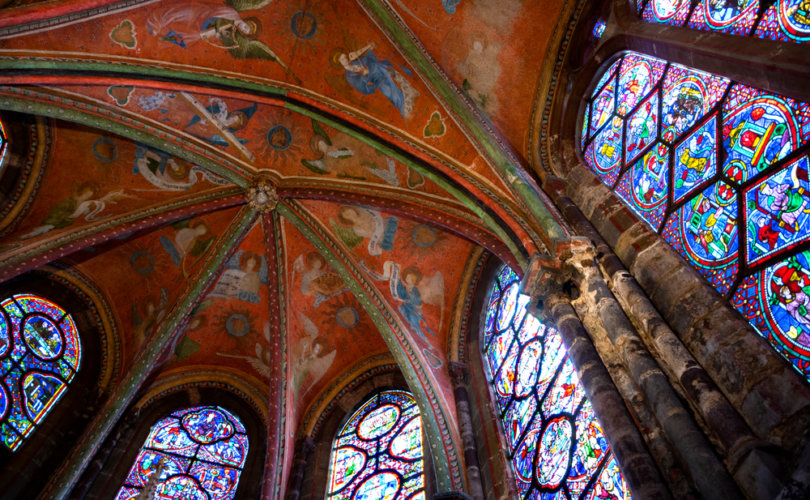 LE MANS, FRANCE - Angel musicians play heavenly concert. Fresco painted on the vaults of the chapel of the Virgin in Saint -Julien cathedral.Shutterstock.com

September 11, 2018 (LifeSiteNews) – My weekly art columns have thus far focused exclusively on visual art, in particular, great paintings. But I would also like to introduce readers to great music that uplifts and consoles the spirit. And of all the wonderful music composed in the West, the heritage of sacred music is the very greatest, yet nowadays the least appreciated by most Christians, who too often listen exclusively to the popular styles of recent decades. In doing so, they deprive themselves of exposure to truly celestial beauty.

Although I have a large collection of “classical” music CDs, ranging from medieval chant to the modern masterpieces of Arvo Pärt, and everything in between (Renaissance, Baroque, Classical, Romantic), rarely have I come across a selection of pieces as exquisitely beautiful and superbly performed as these are. The program consists of English composers ranging from John Dunstable (1390–1453) to Thomas Tomkins (1572–1656), with the two most famous, Thomas Tallis (c. 1505–1585) and William Byrd (c. 1540–1623), represented by several works each. There is a blend of Latin and English, with texts drawn from Scripture and the liturgy.

All of the pieces, composed in that distinctive English choral style of unexpected dissonances, richness of harmonic texture, sweeping phrases, and ingenuity of rhetoric, are instantly impressive and lingeringly memorable. The music is grand but not grandiose, passionately calm, intensely meditative, and full of spiritual yearning. An atmosphere of underlying calm in these pieces witnesses to the primacy of the Logos, the intelligible Word, to which this music pays homage.

Above all, it is theocentric, like the liturgy out of which it emerged and for which it exists. The words are themselves prayers or the narrative of prayers, and the music induces in the listener an openness to the transcendent, eternal, and infinite that is only one step away from actual prayer to Father, Son, and Holy Spirit. When I listen to this CD, I am transported to the courts of the King.

I could not say which tracks are my favorite, for I love them all; but for sheer sonic beauty, the two settings by John Sheppard of the Trinitarian prayer “Libera nos, salva nos” would be difficult to surpass. Fortunately, the Gesualdo Six has made the second of these settings available in a video performance at YouTube, so those who would like to sample the CD should make a point of listening to this:

The CD also includes the ever-popular “If ye love me” by Thomas Tallis, but sung at a lower pitch by basses and tenors:

As a Catholic writer who has specialized in studying and critiquing the utter devastation wrought in the temple of God by the postconciliar liturgical revolution, I find especially haunting the words of the two-part motet “Ne irascaris Domine” by William Byrd, taken from Isaiah 64:9–10:

Be not very angry, O Lord,
and remember no longer our iniquity.
Behold, see we are all thy people.
The city of thy sanctuary is become a desert,
Sion is made a desert,
Jerusalem is desolate.

Yet the loveliness of the music, and the pleading with which Byrd cries out to the Lord—the sincere cry of a lifelong recusant Catholic who suffered fines and anxieties for his loyalty to the Roman Catholic Church during the Elizabethan persecution—envelops me, reminds me of everlasting truths, turns my mind to the One who can save us from our iniquities and the desolation wrought upon us, and kindles renewed energy in my soul to fight for sacred music and the sacred liturgy.

For there is even now a flowering desert and a city rebuilding in the Catholic traditional movement. Where time and space collapse as they do in the Sacrifice of the Mass, there we can discover anew William Byrd, Thomas Tallis, John Sheppard, and other outstanding composers on this disc as living composers, their music fresh, their witness unfading.