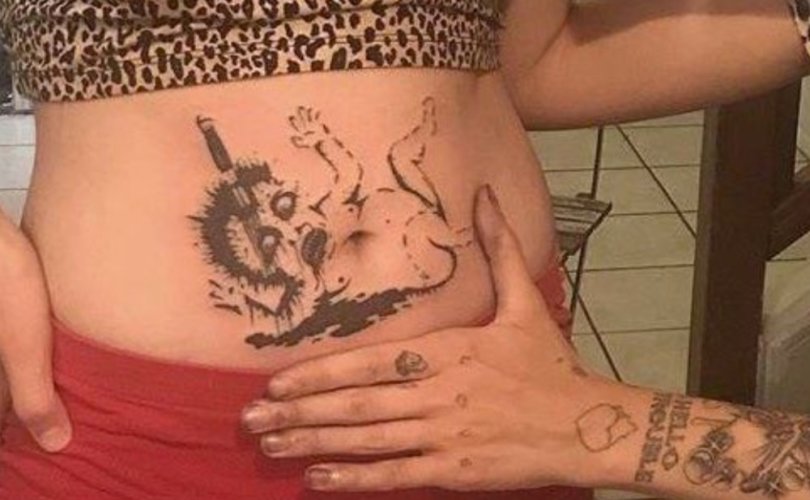 (LifeSiteNews) — While the left has reacted to the Supreme Court’s upending of Roe v. Wade by calling for terrorist acts against pregnancy centers and churches and violence in the streets, perhaps the most troubling protests have come from pro-abortion moms.

Here are a few of their heartbreaking anti-Dobbs protestations seen on social media. They’ve become more unhinged with each passing day.

On Friday, the day of the Dobbs ruling, a very pregnant woman pulled up her blouse to reveal that she had written “NOT YET A HUMAN,” over her child within.

“In case you want a glimpse at the demonic mindset on display at the Supreme Court today,” commented The Federalist’s Christopher Bedford.

In case you want a glimpse at the demonic mindset on display at the Supreme Court today. pic.twitter.com/Jkine2omyv

Another woman standing in front of the court with her young family held a large cardboard sign screaming, “DON’T FORCE THIS ON ANYONE,” with arrows pointing at her son and daughter.

“Nothing demonstrates unconditional love for your children more than using them as props at a pro-abortion rally, making them stand next to a sign that says you wish they were never even born,” wrote Joel M. Petlin in response to the disturbing photo.

Nothing demonstrates unconditional love for your children more than using them as props at a pro-abortion rally, making them stand next to a sign that says you wish they were never even born. 🤦‍♂️ pic.twitter.com/hfE3OAQUeW

Perhaps the most unsettling image came on Sunday in the form of a tweet. It contained a photo of a tattoo artist, presumably, showing off her work on the abdomen of another woman: it ghoulishly depicts a frightened late term baby in utero with an abortion instrument plunged into his or her forehead.

“Woman has picture of a tortured in-utero baby, writhing and screaming in pain as a live abortion is being performed, tattooed on her stomach,” she explained.

“Disgusting people but she has it right,” she continued. “This IS what a baby looks like during abortion. They feel pain.”

Woman has picture of a tortured in-utero baby, Writhing and screaming in pain as a live abortion is being performed, tattooed on her stomach

Disgusting people but she has it right. This IS what a baby looks like during abortion. They👏feel👏pain pic.twitter.com/UVYQ4AGtmV