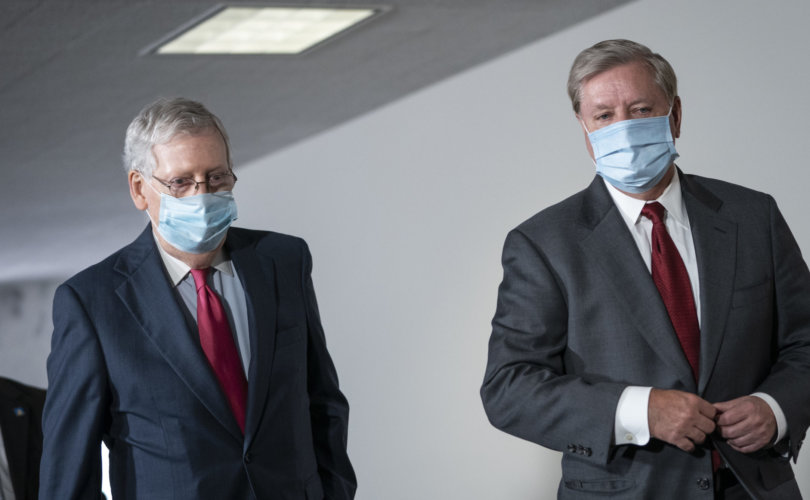 WASHINGTON, D.C. (LifeSiteNews) – Joe Biden is trying to install a radical, left-wing activist on the nation’s highest court – and a handful of Republicans might help him do it.

Biden on Friday announced his nomination of Ketanji Brown Jackson, currently a “middling” judge on the D.C. Circuit court, making good on a promise to name a Supreme Court pick based on her race and gender.

Jackson, 51, would replace 83-year-old liberal Justice Stephen Breyer, who will retire in June after caving to a months-long, far-left pressure campaign urging him to resign before the midterms.

Jackson, promoted on the “Supreme Court short list” of a top Soros-funded dark money network, has a history of supporting abortion and other liberal causes. In the 1990s, she wrote an amicus brief defending a Massachusetts law that banned protests outside of abortion clinics. The law was ruled unconstitutional in 2000.

As an Obama-appointed district judge, Jackson “repeatedly used her power to limit the actions of former President Donald Trump,” The Federalist noted:

In 2018, she ruled against Trump in a federal employee unions lawsuit even though she acknowledged he had the constitutional authority to “issue executive orders pertaining to the field of federal labor relations.” In 2019, she used the Russian collusion hoax as an excuse to justify mandating that former White House counsel Don McGahn testify before the House Judiciary Committee.

Jackson is also known for her role as vice chair of the U.S. Sentencing Commission as it liberalized sentencing rules for drug offenders and for defending detainees at Guantánamo Bay. And she’s already facing ethics questions.

Progressive activists and top abortion groups celebrated Jackson’s appointment Friday. “We can’t wait to see the fantastic work you will do and will be here to support you along the way,” Planned Parenthood CEO Alexis McGill Johnson wrote in a tweet addressed to Jackson.

Planned Parenthood Action added, “We believe Judge Jackson will bring a commitment to the Court to protect our individual liberties, including reproductive and LGBTQ+ rights.”

Her nomination could be an uphill battle in the evenly-split 50-50 Senate, where she can’t afford to lose a single Democratic vote. But Jackson may be able to count on a few Republican senators who have signaled their willingness to help Biden secure likely the most consequential appointment of his administration.

Biden previously nominated Jackson for the D.C. Circuit last year among his first judicial appointees. The Senate confirmed her in a 53-44 vote in June, with the backing of all Democrats and three Republicans: Sens. Susan Collins of Maine, Lisa Murkowski of Alaska, and Lindsey Graham of South Carolina.

Collins offered high praise for Jackson in a statement Friday, calling her “an experienced federal judge with impressive academic and legal credentials. I will conduct a thorough vetting of Judge Jackson’s nomination and look forward to her public hearing before the Senate Judiciary Committee and to meeting with her in my office,” the Maine senator said.

Murkowski, who’s up for re-election in November, said Friday that “previously voting to confirm an individual to a lower court does not signal how I will vote for a Supreme Court justice. Being confirmed to the Supreme Court — the nation’s highest tribunal, and a lifetime appointment — is an incredibly high bar to achieve.”

The pro-abortion Alaska Republican, however, has said that she would be “honored” to approve a Black woman chosen by Biden. “I want to make sure that the president nominates an exceptional candidate, an exceptional individual, and I would be honored to be able to support an exceptional African American woman,” Murkowski told CNN earlier this month.

And she told reporters Tuesday that she’s “watching with great interest the direction that the court may take” ahead of an upcoming decision that could strike down Roe v. Wade.

Even though he voted for Jackson just months ago, Sen. Graham blasted her nomination Friday evening, saying it “means the radical Left has won President Biden over yet again.”

Graham for weeks had heavily lobbied the White House to tap South Carolina federal judge Michelle Childs, another Obama appointee, to replace Breyer. “I can’t think of a better person for President Biden to consider for the Supreme Court than Michelle Childs,” he said in a recent appearance on Face the Nation. “I cannot say anything bad about Michelle Childs. She is an awesome person.”

Childs, in fact, is a radical progressive extremist who in 2014 unilaterally required South Carolina to recognize same-sex “marriages” performed in other states. Two months before the 2020 election, she blocked the state’s absentee ballot witness requirement in a ruling eventually overturned by the Supreme Court. Last December, Childs also threw out a lawsuit by workers who objected to a punitive COVID-19 vaccine mandate at a South Carolina nuclear facility.

Graham lamented Friday that Biden didn’t settle on the liberal judge, tweeting that “attacks by the Left on Judge Childs from South Carolina apparently worked.”

Along with Murkowski and Collins, Graham has been a consistent backer of Biden’s nominees to the federal bench, voting for more than half of his 46 judges confirmed by the Senate so far. As of late January, Collins has endorsed around 86 percent of Biden’s judicial picks, and Murkowski has voted for almost 80 percent, according to POLITICO.

But the South Carolina Republican’s support carries additional weight: As a member of the Senate Judiciary Committee, he could speed up Jackson’s confirmation process by voting to send her nomination directly to the Senate floor. Democrats need at least one GOP vote in the equally-divided committee to bypass time-consuming procedural votes as the November elections grow closer.

Graham has already strongly suggested that he will vote Jackson out of committee, regardless. “I just don’t think it’s good for the process” to hold up a Supreme Court nomination, he told POLITICO last month.

Collins and Murkowski are well-known for betraying conservatives, including on abortion and same-sex “marriage,” and voted in February 2021 to convict President Trump of impeachment. Graham, however, continues to tout himself as a “conservative leader,” and specifically, “a champion for confirming conservative judges.” The South Carolina senator is at the “front-and-center” of “judicial reform,” his website boasts.

“Lindsey Graham is the only Republican on the Judiciary Committee who has not voted to reject a single judge the Biden administration has proposed, no matter how crazy they are,” Fox News host Tucker Carlson reported in August. “Senate aides tell us that because of Lindsey Graham, one man, the Biden administration is able to rush its nominees through the Senate confirmation process faster than any other president in memory.”

Graham, Collins, and Murkowski are far from the only Senate Republicans who have consistently advanced Joe Biden’s leftist judges.

Sens. Thom Tillis of North Carolina and Chuck Grassley of Iowa, both members of the Judiciary Committee, have each voted to confirm around 20 of the White House’s judicial nominees in the past year. “There’s always deference to a president,” Grassley, who’s running for his eighth Senate term this fall, told NBC News.

McConnell has privately instructed Republicans on the Judiciary Committee not to push back too aggressively on Biden’s SCOTUS nominee, CNN reported this month. “I think you’re not going to find Republicans getting in the gutter like the Democrats did with [Justice Brett] Kavanaugh,” Sen. Grassley told CNN as he left a meeting with McConnell.

“We fully expect the nominee not to be a conservative,” North Dakota Republican Sen. Kevin Cramer commented to The New York Times. “If they are acceptable in every other way and they are a Black woman because the president made a commitment to nominate a Black woman, we should celebrate that.”

The Senate unanimously approved Jackson’s nomination to the U.S. District of Columbia District Court in 2013.

Another example, James Moody – the federal judge who struck down Arkansas’ first-in-the-nation ban on transgender drugs and surgeries for kids last year – also sailed through the Senate eight years ago with the backing of all but four Republicans.

Sen. John Boozman of Arkansas lauded Moody at the time as a “great fit” for his state.

And Judge Mary Lewis, who blocked South Carolina’s six-week abortion ban in February 2021 and later halted the state’s mask mandate ban, cleared the Senate in 2012 with the endorsement of nine GOP senators, including Sens. Graham, Collins, and Murkowski.

“She will be a great judge for our state,” Graham said about the pro-abortion Obama appointee at a Senate Judiciary hearing.

“And I would not hesitate for one second to have any member of my family, someone I cared about, appearing before her, because I know she would be fair and apply the law as it should be applied,” he added.