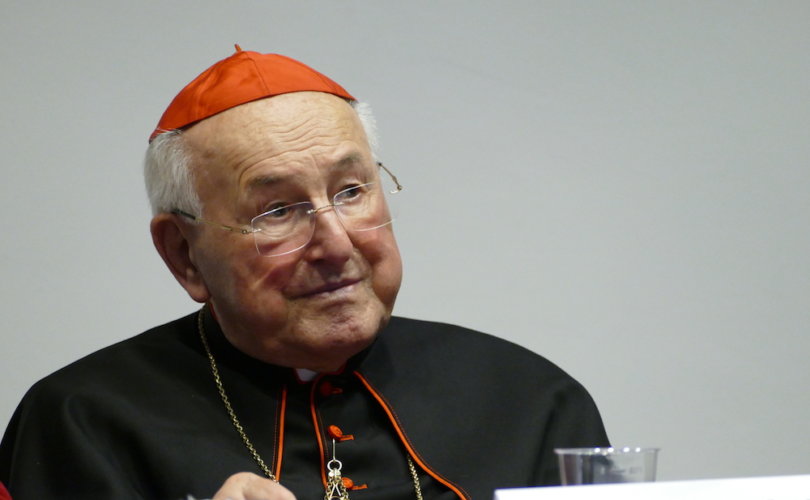 March 25, 2021 (LifeSiteNews) — Cardinal Walter Brandmüller, the retired president of the Papal Committee for Historical Sciences and one of the four dubia cardinals, has now joined Cardinals Raymond Burke and Gerhard Müller in criticizing the curious Vatican document issued by the Secretariat of State that essentially banned individual Masses at St. Peter’s Basilica in Rome.

In an essay published in the German Catholic newspaper Die Tagespost, the German cardinal responded to a note dated March 12 and issued by the Secretariat of State. The note essentially banned all individual Masses at St. Peter’s basilica. This new order has it that from March 22 on, and for an indefinite period, all priests and faithful who come to daily Mass in the Basilica will be required to join “concelebrated” Masses at fixed times between 7:00 and 9:00 a.m. in only two locations.

While priests still can celebrate the Traditional Latin Mass, the times to do so have been strongly limited, and they can only do so in the Clementine Chapel in the grotto underneath the basilica. (See here different photos and a video of the spiritually troubling situation in St. Peter’s. However, news have come to us today that one cardinal, in seeming defiance of the order, celebrated Mass at the tomb of Pope John Paul II today). As the National Catholic Register’s Rome correspondent Edward Pentin and other sources were able to report, Pope Francis himself was behind this formally unusual step to restrict the celebration of Holy Mass at St. Peter's.

Brandmüller, in his commentary, is discussing whether this arbitrary decree actually is not a sort of “trial balloon” for further novelties and changes, and whether this is not a sign of a problematic exercise of authority in the Vatican.

He writes: “The suggestion has already been made that this was a ‘ballon d’essay’ [trial balloon] intended to explore the reactions to be expected to intended innovations. If this were true, however, the very serious question would have to be asked whether this could be the way in which the power of the keys should be exercised in the Church of Jesus Christ.”

Here, he points to the head of the Catholic Church, the Pope.

Cardinal Brandmüller reminds us that the exercise of authority in the Church is not unlimited and that it is, instead, bound by the natural law and the Christian moral law. He says that it needs to be “emphatically recalled that the ‘plenitudo potestatis’ — that is, the spiritual plenitude of powers — proper to the Roman Primacy finds its limits both in natural law and in Christian moral law.” Accordingly, this authority is “‘plenaria’ insofar as it does not depend on any higher — earthly — power, but it is by no means limitless. Thus, if in our case an order is intended that violates positive as well as natural law, the consequences of disregarding law and justice would have to be pointed out emphatically.”

That is to say, Cardinal Brandmüller tells the Catholic world that strong resistance against the abuse of power by the Pope is needed here.

The German prelate also points out that the responsible authority for matters pertaining to the basilica lie in the hands of the cathedral chapter under the leadership of Cardinal-Archpriest Mauro Gambetti, but that this authority has been bypassed. “This is a case of usurpation of authority or violation of rights by whomsoever,” Brandmüller writes, explaining that “orders concerning Holy Mass in St. Peter’s … are discussed and decided by the chapter.”

Continues the cardinal: “The fact that this obviously did not happen in the present case means that the aforementioned letter is null and void.”

He goes on to stress that this letter also “disregards Canon 902 of the Codex Iuris Canonici, which states: ‘… individuals [that is, priests] are free to celebrate the Eucharist individually’ if there is no concelebration in the same church at the same time.”

Cardinal Brandmüller also explicitly refers back to Cardinal Raymond Burke’s own critique of this March 12 note, adding that his fellow cardinal had discussed all the juridical questions of this case. Burke, in his March 13 statement, said that the Secretariat of State is “not competent for the liturgical discipline of the Church and, in particular, for the liturgical discipline at the Basilica of Saint Peter,” and insisted that the Secretariat of State’s note should be “rescinded.”

Subsequently, LifeSite launched a petition with a call to rescind this unjust order. The petition has so far gained more than 15,000 signatures.

Cardinal Gerhard Müller, the former head of the Congregation for the Doctrine of the Faith, recently stated in an interview with EWTN’s Raymond Arroyo that “nobody is obliged to obey” this note, since the Secretariat of State has neither the “disciplinary competence” nor the “theological competence” to make decisions in liturgical questions at St. Peter’s.

He had also pointed out that “nobody can be forced to concelebrate, because the normal form of the Holy Mass is one priest is celebrating, representing Christ,” and that “the concelebration only of priests together is not a normal form.”

The German cardinal also insisted that this new decree is not pastoral, inasmuch as it essentially bans all other languages but Italian in the Novus Ordo, thereby making it harder for the faithful to follow those few Masses that still take place in the restricted way.

Cardinal Brandmüller, in his own commentary, seems to agree with Müller here, since he himself also points out, for the sake of pastoral care and piety, that “the basilica above the tomb of Peter, the Prince of the Apostles, and the tombs of many saints, are unique in the world, the center of the universal Church and, from the earliest times, a pilgrimage destination for the faithful from all over the world.”

“To deprive the many pilgrims, especially the priests, who come to Rome in large numbers from distant parts of the world, of the opportunity to celebrate Holy Mass in the Father’s house, as it were, would be absolutely unjustifiable,” Brandmüller concludes.