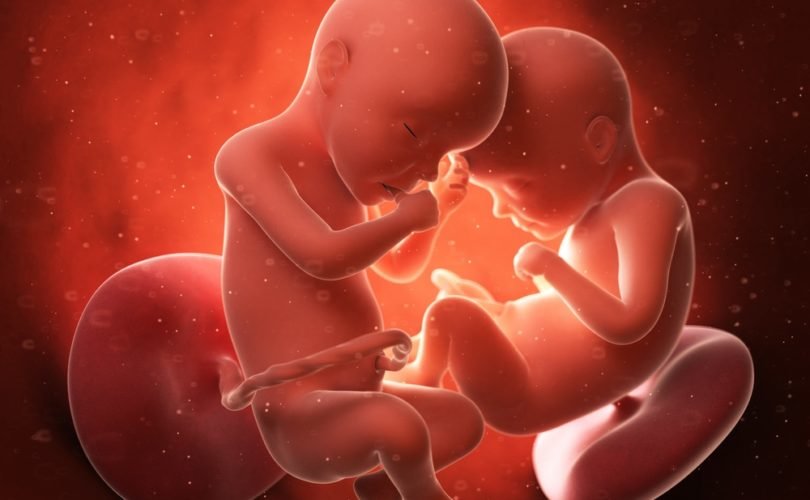 April 30, 2021 (LifeSiteNews) – In 2016, the Washington Post covered the story of Brittneyrose Torres, a woman serving as a surrogate mother. Her womb was being rented to gestate triplets, for which she was being paid up to $30,000. There had been twins originally, but one embryo had split. The biological parents asked her to “eliminate the female, citing medical concerns.” A doctor told Torres there was nothing wrong with the unborn little girl, and an acrimonious battle ensued.

Such fights have become more common. Parents have offered surrogate mothers thousands of dollars to abort “imperfect” children and have actually sued mothers who refused (this did not happen in Torres’ case). Some doctors sell their services creating human life; others sell their services ending human life. Increasingly, human beings brought into this world in a petri dish are at risk of leaving it through the bloody suction hose of an abortionist’s aspirator.

Perhaps the most horrifying example of this is a 2013 essay in Elle magazine by Bettina Paige titled “Would you get a selective reduction?” A “selective reduction” is the banal term used to describe killing a twin; it is also referred to as a “plus one, minus one pregnancy.” Paige pursued in-vitro fertilization (IVF); she and her husband ended up expecting twins. This is when her husband stepped in. “Bettina, we can’t handle twins,” he said, as if one of their twins did not already exist. “I told you when you started all this that I didn’t want twins.”

Paige was under no illusions about what this meant. She’d known “selective reduction” had been a “contingency plan,” but hadn’t thought they’d ever use it. “Now,” she wrote, “I was horrified at the idea of terminating one of the fetuses growing inside me by injecting potassium chloride into his or her heart.” She knew that they were not talking about “reducing” twins—they were talking about killing one of them:

With my son, I'd witnessed the step-by-step progress from blip to eight-pound, two-ounce boy, marveling at the increasingly recognizable sonogram images, poring over the weekly e-mail announcements from a pregnancy website: Your baby now has fingernails, your baby is now the size of a lemon, a banana, a melon. … And while I strongly believed in women's right to have an abortion, the unlucky fetus destined for elimination wasn't merely an abstract potential life, or an accident. He or she was the product of my love for my husband, a life we'd made together on purpose. This fetus had an identity, not least as someone's twin. “Selective reduction” was Orwellian; I knew I was ending what could be a life.

I also worried that the surviving child would be scarred by the loss. Perhaps the fetus would register the cessation of the heartbeat in the neighboring sac, the stilling of the fluttery movements. Could the proximity of decaying fetal tissue infuse my womb with the specter of death? If the chosen one ended up with mental illness or autism, would I always blame myself for having a reduction? All this may seem melodramatic, but I've heard about identical twins holding hands in utero; I've seen the secret language and private reality shared between even fraternal twins.

Despite all this—as well as “dreams with shadowy predators”—Paige hunted for a predator willing to perform the procedure, as this was too much even for many doctors willing to commit other feticides. Her husband was relentless in demanding that she kill one of the children. “But neither of us even likes our brothers and sisters that much,” he told his wife. His coldblooded regard for his siblings, it turned out, meant depriving one of his children of her twin.

Paige is one of those writers who believes that sharing her emotional turmoil over this horrifying decision can create empathy that excuses what she is doing. When she “watched the two little sacs on the sonogram darken and grow, develop heartbeats and vaguely human outlines,” she asked the doctor to turn the screen away because she didn’t want to “get attached.” Her doctor told her that he wouldn’t do a reduction, and that getting one would mean a 10% chance of losing both twins. She convinced herself that despite all that, it was the best thing to do.

After all, what would twins mean? No career advancement. Less money. More expenses. Complicated naptimes. She probably couldn’t work. But Paige knew all of those excuses were just that—excuses. “Wasn’t sacrifice part of what being a parent was all about? Was it more accurate to say that we didn’t want to handle twins, rather than we couldn’t?” Yes. But at the end of the day, “my husband and I fought over sharing the responsibilities of one child.” Her husband even got religious about it, telling her that the twins “weren’t part of God’s plan…They were the product of artificial insemination.”

She hid the decision from friends and family at first. Despite hoping there would be something wrong with one of them, she found out that “both my babies were healthy.” She and her husband got her mom to babysit their toddler while they went to abort his sibling. Reading Paige’s account, it is hard to understand why she decided to record it:

Our doctor told us that she'd take into account any gender preference if the CVS determined that both babies were equally healthy. Now as she examined the ultrasound, she asked whether gender mattered to us. “Well, we have a boy at home, so I guess we'd prefer a girl,” I said, realizing with a start that since she gave us a choice, I must be carrying a boy and a girl, and I'd just chosen to terminate a boy. I had a vision of what our son's brother might have looked like—the same dimples, slender back, and full lips. I felt a rush of nausea, as if I was eliminating a bit of him, too—or at least his DNA.

What I couldn't foresee, lying there on the table, was how guilty I'd feel watching my son struggle with having to share his mother with only one sibling: the girl I'd give birth to seven months later…The doctor spoke quietly to the ultrasound technician, instructing her to shift the wand this way and that. “I'm inserting the needle now,” she said. “You'll feel a pinch.” My husband moved to the head of the bed, just as he had during our son's birth. I stared up at him as he closed his eyes and his lips started to move in silent prayer.

“Selective reduction” abortions are one of the most chilling examples of humans playing God. Paige’s twins were brought into existence by a doctor—and a doctor killed one of them when his parents decided that another little boy would be too much. Created and killed by doctors, with the briefest of lifespans in between. It is the commodification of human life on a grand scale, and it is an indictment of our civilization.

Bettina Paige’s little boy—the one who might have had dimples, a slender back, and full lips—died at the end of a doctor’s needle, inches away from his sister. His sister was wanted. He was not. His father wanted him dead; his mother acquiesced. His short life should be remembered not as an example of why “selective reduction” is so difficult for the parents, but as a morality tale showcasing what happens when a truly sick culture gets a terminal diagnosis.