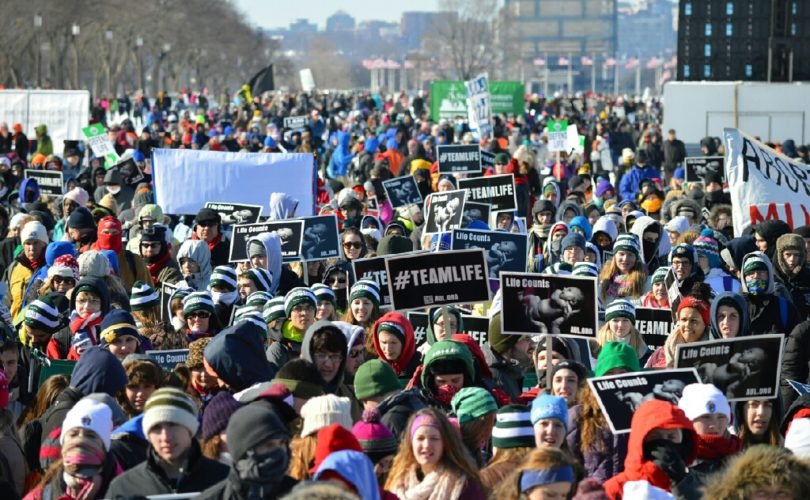 January 18, 2019 (LifeSiteNews) – It’s that time of year again. All pro-life eyes are on the March for Life, Washington, D.C. is teeming with speeches and events, and of course, Republicans have pro-life bills to hold votes on….votes that nobody on either side actually believes will do anything.

That’s not the bill authors’ fault, of course. The party of abortion-on-demand now controls the House of Representatives, and no amount of good intentions can force good laws through it to the president’s desk. And there is some PR value in keeping pro-life policies in the public eye and forcing pro-aborts to put their opposition on the record.

But let’s not overstate the value of show votes, or let them make up for the two years Republicans had, and wasted, to pass pro-life laws for real.

As we’ve discussed repeatedly over the past year, multiple important pro-life bills passed the House but died in the Senate, primarily because Senate Majority Leader Mitch McConnell and other GOP senators had zero interest in repealing or modifying the constitutionally-baseless rule that ordinary legislation needs 60 votes, or even just using the existing rules to get around the filibuster. Senate leaders also showed zero interest in either pressuring the Senate’s two pro-abortion Republicans to follow the GOP platform or replacing them.

(Of course, Susan Collins and Lisa Murkowski wouldn’t have been as much of a problem had McConnell not helped lose a seat Republicans had held for the previous 25 years…seeing a pattern here?)

After the November midterms should have given the do-nothing GOP a wakeup call, they passed on their one last chance to defund Planned Parenthood during the lame-duck session, and chose to rubber-stamp another establishmentarian House leader instead of pro-life reformer Jim Jordan (meanwhile, most of the Right is too busy sharing “Cocaine Mitch” memes to even consider the need for new Senate leadership).

So forgive us if we don’t exactly jump for joy when our elected champions put in the bare minimum necessary to look busy during the week when more pro-life eyes than usual are set on the town where they work.

And with all due respect to the pro-life groups we quoted yesterday hailing the taxpayer funding show vote as some sort of heroic stand, the deadly combo of gushing praise for modest gestures and near-total silence on everything else listed above is a massive part of why the pattern persists.

As Donald Trump and Nancy Pelosi fight over the southern border wall Trump promised voters he’d start building, more than a few people have understandably started wondering why the GOP has never drawn a similar line in the sand against abortion:

Friendly reminder that Republicans did not shut down the government to defund Planned Parenthood.

Far rarer, though, are acknowledgments of the obvious answer: because the pro-life movement has never forced Republicans to. The GOP wasn’t going to shut down the government over illegal immigration, either; Trump was prepared to once again sign one of the usual swamp budgets, but reversed course at the last minute when conservatives revolted loudly enough to make him fear the political consequences.

Enough Republicans finally started fearing conservatives enough to fight on something. Whether they’re fighting the right way or will keep their nerve is another question for another day, but the key takeaway for us is that the GOP doesn’t fear pro-lifers in the same way. And why should they? When’s the last time we’ve given them a reason to?

It’s too late to do anything about that for the next two years, but now is the time for our movement to do some serious, top-to-bottom self-examination – what our near-term goals are, how we measure progress, how we decide what’s good enough from our politicians, and whether we’re willing to change tactics when we keep failing to get results.

Every year, the imagery from the March for Life powerfully illustrates just how many people are behind us, and how passionate they are. This year, let’s figure out how to channel all of that energy into a voice the people elected to stop the killing can’t ignore anymore.