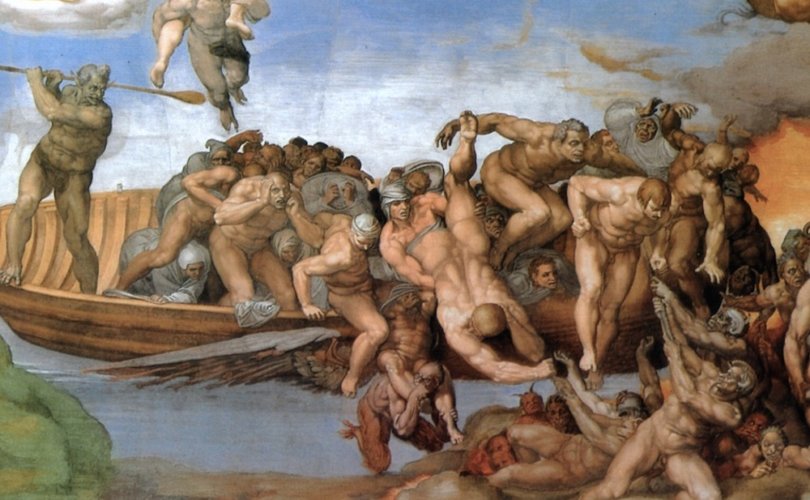 But silence in the face of blatant sexual deviancy, especially among the clergy, has never been the practice of some of the Church’s greatest leaders, including Doctors of the Church and one saintly pope.

During the height of the Renaissance, homosexuality among the clergy was no small problem. Pope Pius V, who was later canonized, directly combatted what he called the “horrible crime” of homosexual practices among the clergy by setting down strict directives.

“That horrible crime, on account of which corrupt and obscene cities were destroyed by fire through divine condemnation, causes us most bitter sorrow and shocks our mind, impelling us to repress such a crime with the greatest possible zeal,” he wrote in his 1568 Apostolic Constitution Horrendum illud scelus.

It is interesting to note that Saint Pius V never shrunk from the duty of his high office with statements such as “who am I to judge.” Rather, he combatted homosexuality “with the greatest possible zeal.”

Pius V decreed that not only were active homosexual clergy to be removed from the “clerical order,” but they were to be handed over to the secular authority for punishment.

“If anyone perpetrates the nefarious crime against nature, because of which the wrath of God came upon the children of unbelief, they are to be turned over to the secular court, and if they are a cleric, they are to be stripped of all [clerical] order and to be subjected to a similar penalty,” he wrote.

Later, he wrote in Horrendum illud scelus that clerics who committed homosexual acts were to be “degraded by Ecclesiastical Judgment” then “handed over to the secular power, which may exact from them that same punishment that is received by laity who have fallen into this ruin, which is found to be constituted in legitimate ordinances.”

Going back to the writings of St. Paul and even further to the Old Testament, the Church has a long history of speaking out against homosexuality.

St. Paul warns the Romans (1:26-27) that when men chose to worship and serve the creature over the Creator, God gave them up to the “lusts of their hearts to impurity, to the dishonoring of their bodies among themselves.

“Their women exchanged natural relations for unnatural, and the men likewise gave up natural relations with women and were consumed with passion for one another, men committing shameless acts with men and receiving in their own persons the due penalty for their error,” he wrote.

Elsewhere St. Paul warns that “homosexuals” among other sinners will “not inherit the kingdom of God” unless they become “washed…sanctified…justified in the name of the Lord Jesus Christ” (1 Corinthians 6:9-10).

Two saints, both doctors of the Church, who spoke out forcefully against homosexuality within the clergy are Saint Peter Damian, an 11th-century Italian Catholic reformer and Saint Catherine of Siena, a 14th-century religious mystic.

St. Peter Damian wrote his Book of Gomorrah to Pope Leo IX in 1049 at a time when homosexuality and sexual perversion within the clergy were likely more rampant than it is today. Damien showed no false mercy or compromise in condemning sodomy, what he believed to be the gravest of all sins.

“If this absolutely ignominious and abominable vice is not immediately stopped with an iron fist, ” he told the Pope, “the sword of Divine wrath will fall upon us, bringing ruin to many.”

Damian warned the Pope that the “cancer of sodomitic impurity is creeping through the clerical order,” decrying the sexual abuse of “spiritual sons” by Catholic priests. He warned that all clergy who are habituated to homosexual behavior should be removed from the priesthood, and that the wrath of God is provoked against those who continue to offer the sacrifice of the Mass while committing homosexual sins.

According to Damian, the evil of homosexual behavior “surpasses the savagery of all other vices,” and “is to be compared to no other. For this vice is the death of bodies, the destruction of souls, pollutes the flesh, extinguishes the light of the intellect, expels the Holy Spirit from the temple of the human heart, introduces the diabolical inciter of lust, throws into confusion, and removes the truth completely from the deceived mind.”

He notes that “whoever has soiled himself with the contamination of sodomitic disgrace … unless he is cleansed by the fulfillment of fruitful penance, can never have the grace of God, will never be worthy of the body and blood of Christ, and will never cross the threshold of the celestial homeland.”

To priests engaging in homosexual activities, he warns: “Beware of inextinguishably inflaming the fury of God against you, lest by your prayers you more sharply provoke Him whom you patently offend by your evil acts.”

Damian expressed profound sorrow for those priests who had fallen into sexual perversion. He promised them that they could be liberated from their enslavement to sin by God and restored spiritually if they repent and do penance.

St. Catherine of Siena said in her famous Dialogues — written as if dictated by God — that priests who commit homosexuals sins appear before God as those filled with “stench and misery.”

Such priests, the Lord told Catherine, not only offend by failing to resist their fallen nature, “but do worse, committing that accursed sin against nature [homosexual acts].”

“Like the blind and stupid having dimmed the light of the understanding, they do not recognize the stench and misery in which they find themselves,” she wrote.

Continued the Lord to Catherine: “It is not only that this sin stinks before me, who am the Supreme and Eternal Truth, it does indeed displease me so much and I hold it in such abomination that for it alone I buried five cities by a divine judgment, my divine justice being no longer able to endure it.”

Homosexual sin is traditionally one of the four sins that cry to heaven for vengeance.

The Lord told Catherine that even the demons are repulsed by this sin.

“This sin not only displeases me as I have said, but also the devils whom these wretches have made their masters. Not that the evil displeases them because they like anything good, but because their nature was originally angelic, and their angelic nature causes them to loathe the sight of the actual commission of this enormous sin,” she wrote.

St. Catherine recounted the Lord saying that prayers and tears are the remedies for such sins among the clergy.

“Never cease offering me the incense of fragrant prayers for the salvation of souls, for I want to be merciful to the world. With your prayers and sweat and tears, I will wash the face of my bride, Holy Church. I showed her to you earlier as a maiden whose face was all dirtied as if she were a leper. The clergy and the whole of Christianity are to blame for this because of their sins, though they receive their nourishment at the breast of this bride.”

Rev. John Zuhlsdorf, a Catholic blogger, wrote that Satan especially attacks clergy because their “influence extends over many souls.”

“Enemy demons can attach themselves to places and objects and infest them due to sins that are committed in them and with them. They stick to those places like vile, hell-leeches and claim the right to be there because of those sins until their hold is broken through exorcism,” he said.

April 10, 2019 udpate: This report has been updated with a more accurate translation of a quote by Pius V.