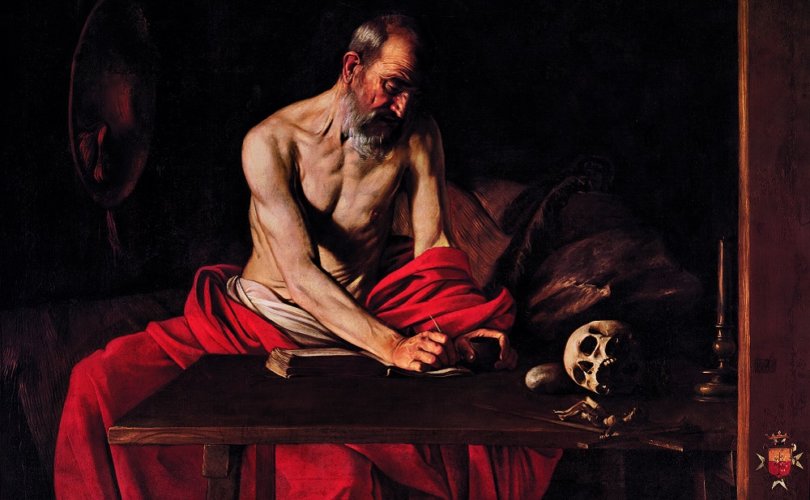 September 15, 2020 (LifeSiteNews) — Exactly one hundred years ago today, on September 15, 1920, Pope Benedict XV promulgated the encyclical Spiritus Paraclitus, dedicated to celebrating the life and work of St. Jerome, for the fifteenth centenary of St. Jerome’s death. Although little remembered today (as would be true of most features of Benedict XV’s pontificate), it deserves a fresh look from our vantage, especially for some elements that might be surprising to us.

Benedict XV reminds us that Jerome was inflexible in adhering to the Church’s dogma of the inspiration and inerrancy of the Scriptures:

Thus, not denying at all, but rather affirming the human authors as true (albeit secondary) causes, Jerome emphasizes that God works with these authors in a unique fashion to which no other creaturely activity can be equated:

If we ask how we are to explain this power and action of God, the principal cause, on the sacred writers we shall find that St. Jerome in no wise differs from the common teaching of the Catholic Church. For he holds that God, through His grace, illumines the writer’s mind regarding the particular truth which, “in the person of God,” he is to set before men; he holds, moreover, that God moves the writer’s will — nay, even impels it — to write; finally, that God abides with him unceasingly, in unique fashion, until his task is accomplished. Whence the Saint infers the supreme excellence and dignity of Scripture, and declares that knowledge of it is to be likened to the “treasure”[20] and the “pearl beyond price,” since in them are to be found the riches of Christ and “silver wherewith to adorn God’s house.” (§9)

Thus, Jerome would hold no truck with modern-day scholars who claim to identify all kinds of “errors” in Scripture:

Jerome further shows that the immunity of Scripture from error or deception is necessarily bound up with its Divine inspiration and supreme authority. He says he had learnt this in the most celebrated schools, whether of East or West, and that it was taught him as the doctrine of the Fathers, and generally received. Thus when, at the instance of Pope Damasus, he had begun correcting the Latin text of the New Testament, and certain “manikins” had vehemently attacked him for “making corrections in the Gospels in face of the authority of the Fathers and of general opinion,” Jerome briefly replied that he was not so utterly stupid nor so grossly uneducated as to imagine that the Lord’s words needed any correction or were not divinely inspired. … Here he is in full agreement with Augustine, who wrote to Jerome that to the Sacred Books alone had he been wont to accord such honor and reverence as firmly to believe that none of their writers had ever fallen into any error; and that consequently, if in the said books he came across anything which seemed to run counter to the truth, he did not think that that was really the case, but either that his copy was defective or that the translator had made a mistake, or again, that he himself had failed to understand. (§13; §15)

It grieves us to find that not only men outside, but even children of the Catholic Church — nay, what is a peculiar sorrow to us, even clerics and professors of sacred learning — who in their own conceit either openly repudiate or at least attack in secret the Church’s teaching on this point. (§18)

He describes and castigates the views of the Modernists, who separated the “primary or religious” truth of Scripture from its “secondary or historical” references, claiming that inerrant truth applies only to the former category, not to the latter. The pope also rejects the idea that it is sufficient to say Scripture is free from error in the sense that the intentions of the authors were good, or they described what was commonly held at the time (but was factually false). None of this, says Benedict XV, is compatible with the truth of Scripture’s absolute freedom from any error of any kind, when correctly understood in accordance with the principles of biblical interpretation practiced by the Fathers and Doctors of the Church. Benedict XV predicts that if the Bible is taken as a mere sourcebook for religious opinions and feelings, it will lose its authority altogether. How right he is has been abundantly demonstrated in the century that has elapsed from Spiritus Paraclitus.

Benedict XV then asks: What virtues should we learn from Jerome? He writes:

We are deeply impressed by the intense love of the Bible which St. Jerome exhibits in his whole life and teaching: both are steeped in the Spirit of God. This intense love of the Bible he was ever striving to kindle in the hearts of the faithful, and his words on this subject to the maiden Demetrias are really addressed to us all: “Love the Bible and wisdom will love you; love it and it will preserve you; honor it and it will embrace you; these are the jewels which you should wear on your breast and in your ears.”… This [love of Scripture] is so conspicuous in his letters that they almost seem woven out of Scripture texts; and, as St. Bernard found no taste in things which did not echo the most sweet Name of Jesus, so no literature made any appeal to Jerome unless it derived its light from Holy Scripture. (§31, §33)

The pope urges the bishops to whom the letter is addressed to train good teachers of Scripture for the seminaries and other schools.

Was there ever a time, Venerable Brethren, when there was greater call than now for us all, lay and cleric alike, to imbibe the spirit of this “Greatest of Doctors”? For there are many contumacious folk now who sneer at the authority and government of God, Who has revealed Himself, and of the Church which teaches. You know — for Leo XIII warned us — “how insistently men fight against us; You know the arms and arts they rely upon.”[68] It is your duty, then, to train as many really fit defenders of this holiest of causes as you can. They must be ready to combat not only those who deny the existence of the Supernatural Order altogether, and are thus led to deny the existence of any divine revelation or inspiration, but those, too, who — through an itching desire for novelty — venture to interpret the sacred books as though they were of purely human origin[.] (§39)

Several paragraphs of this encyclical are devoted to St. Jerome’s numerous relationships with students whom he instructed in Scripture and in biblical languages. For example, Jerome describes how he taught Hebrew to Paula, which she learned so well that she could chant the psalms in Hebrew without a Latin accent; the same is true of her daughter Eustochium. If these matrons and virgins could learn their Bible, often memorizing whole sections of it, what excuse have the priests and teachers of the Law? “Learned clerics sin through ignorance of the Bible; therefore he demands of them an assiduous reading of the text” (§45):

How can a cleric teach others the way of salvation if through neglect of meditation on God’s word he fails to teach himself? What confidence can he have that, when ministering to others, he is really “a leader of the blind, a light to them that are in darkness, an instructor of the foolish, having the form of knowledge and of truth in the law,” if he is unwilling to study the said Law and thus shuts the door on any divine illumination on it? Alas! many of God’s ministers, through never looking at their Bible, perish themselves and allow many others to perish also. “The children have asked for bread, and there was none to break it unto them” (Lam. 4:4); and “With desolation is all the land made desolate, for there is none than meditateth in the heart” (Jer. 12:11). (§47)

Benedict XV then cites many passages from St. Jerome in which this worthy Father complains about excessively lengthy, elaborate, ornate discourses from the clergy, empty of conviction and power because they stray so far from the Word of God, or handle it superficially. It’s interesting to reflect on the different problems that afflict preaching in our own day: no longer (usually) too great a length or too fancy a style, but a frequent lack of any substantive doctrinal and moral content at all. One wonders how a gifted polemicist like Jerome would react!

In the encyclical’s conclusion, the pope expends eloquence of his own to sing the praises of this immense scholar and saint:

His voice rings out, telling us of the super-excellence of Holy Scripture, of its integral character and historical trustworthiness, telling us, too, of the pleasant fruits resulting from reading and meditating upon it. His voice summons all the Church’s children to return to a truly Christian standard of life, to shake themselves free from a pagan type of morality which seems to have sprung to life again in these days. … Today this flood [of worldliness] seems on the verge of sweeping away all human institutions — unless God steps in to prevent it. And surely this calamity must come if men persist in sweeping on one side God the Creator and Conserver of all things! Surely whatever cuts itself off from Christ must perish! Yet He Who at His disciples’ prayer calmed the raging sea can restore peace to the tottering fabric of society. (§68)

The entire document merits a re-reading. May Our Lady of Sorrows, who stood faithfully beneath the Cross of her divine Son, obtain for us all the grace of unbending fidelity to Him, and may St. Jerome be our example and intercessor in plumbing the depths of God’s Word.