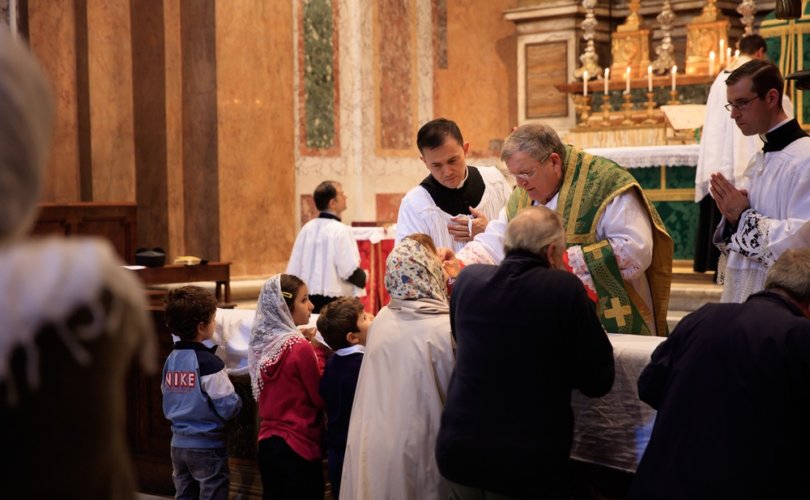 September 9, 2019 (LifeSiteNews) — An Eastern Orthodox cleric wrote to me recently and said:

The recent poll showing the loss of faith [in the Real Presence] by many in the Church of Rome is quite disturbing. May I suggest that the prayer before communion used in both the Orthodox Eastern and Orthodox Western Liturgies be adopted for the Latin West?

He was referring to the following prayer:

O Lord, I firmly believe and profess
that you are truly the Christ,
the Son of the living God,
who came into the world to save sinners,
of whom I am the first.

Accept me as a partaker of your mystical supper,
O Son of God,
for I will not reveal the mysteries to your enemies,
nor will I give you a kiss as did Judas,
but like the thief, I confess to you:

May the partaking of your Holy Mysteries, O Lord,
be not for my judgment or condemnation,
but for the healing of soul and body.

O God, be merciful to me, a sinner.

God, cleanse me of my sins and have mercy on me.

O Lord, forgive me, for I have sinned without number.

In some places, the following portion is also added:

I believe also, that this which I am about to receive
is truly your most pure Body and life-giving Blood;
Wherefore, I pray, have mercy on me
and forgive my transgressions,
both voluntary and involuntary, in word and deed,
committed in knowledge or in ignorance;

And grant that I may partake of your Holy Mysteries without condemnation
for the forgiveness of all my sins and for life everlasting.

My family and I first became familiar with the longer of the two prayers above during our time in Austria, from 1998 to 2006, when we frequently attended Byzantine Divine Liturgy. (This experience was not only good and beautiful in itself, but turned out to be of immense importance to my understanding of and writings on the liturgy, as, for example, may be seen here.)

Saying this prayer several times a week made it easy for all of us to memorize, and we found ourselves almost spontaneously using it privately at Roman Rite Masses as well, at about the moment when the priest was receiving communion himself, or as we were walking up to receive. It was easier to pray it during the traditional Latin Mass because there’s quite a bit more time available for prayer between the priest’s reception of communion and the faithful’s.

As ideal as it might be, in some ways, to have this wonderful prayer inserted into the Roman Rite immediately after the “Lord, I am not worthy that you should enter under my roof…,” it would be an example of the mixing of Eastern and Western elements, the pseudo-Byzantophilia, that was already so great a problem in the liturgical reform and has continued to generate strange hybrids in Europe and elsewhere. A better proposal would be simply to recite this prayer as part of one’s personal preparation, which is, after all, personal and need not be confined to any one style or form of prayer.

In an article at OnePeterFive in 2014, I recommended that parents teach this very prayer to their children as part of home catechesis:

We found that praying it in the quiet space before communion at the Tridentine Mass, or even doing so while walking up for communion at an Ordinary Form Mass, had a unique ability to focus our attention on the Lord. When the children were much smaller, my wife or I would lean over and say the prayer very quietly together with our children at the appropriate time. Later, all that was necessary was a reminder, and they could pray it themselves. In addition or alternatively, one could print it on a little card and keep it in a missal or prayerbook.

Some changes in the Church can come only from the top down. For example, retiring the gargantuan revised lectionary and re-establishing the superior ancient one-year lectionary will need to be done by a future pope; it is not something your parish priest can do. Making the eastward (ad orientem) stance for worship obligatory or reintroducing more kisses of the altar and genuflections — examples of traditional practices that strongly emphasize the sacrificial nature of the Mass and the Real Presence of Christ on the altar — is, again, something that must come from the hierarchy.

But sometimes the change we want to see has to start from the bottom up rather than be imposed from the top down. Parents, lower clergy, religious brothers and sisters, and teachers at all levels are free, at this moment, to instill right concepts and habits of prayer that form the foundations of orthodox faith in transubstantiation, in the sublime mystery that Our Lord is really, truly, substantially present in our midst at the Holy Sacrifice of the Mass. There are readily actionable ways that the sacredness of the Mass can become more sensible: the use, for example, of sacred music and silence. Above all, the old rite of Mass can be reintroduced priest by priest, altar by altar, church by church — the rite that was slowly formed over the centuries as a pearl formed around the grain of the Real Presence.

In these ways, we do not have to wait for the pope or a council or an assembly of bishops to tell us how to fix the problem of the lack of Eucharistic faith in the Church. We can begin to do it ourselves, prompted by the Holy Spirit through whom the Word became flesh and through whom He extends this mystery into the heart of every Mass.