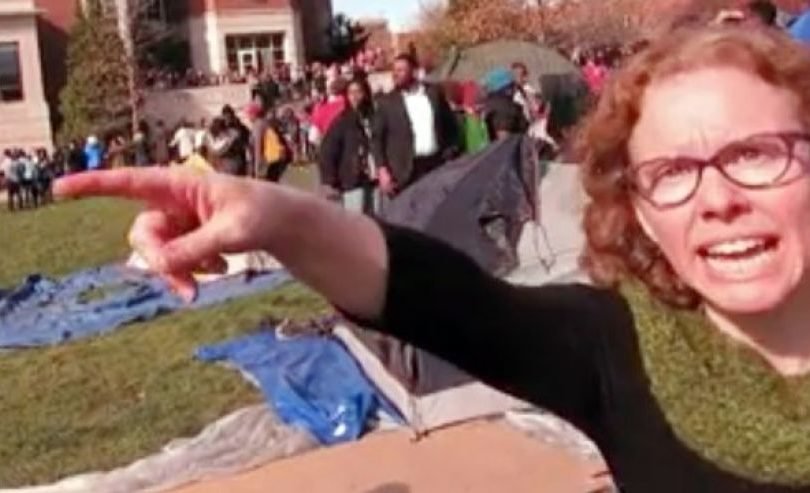 Nov. 16, 2015 (LifeSiteNews) – I am thinking about the demonstrations sweeping across the campuses of my country.

“Had every Athenian citizen been a Socrates,” wrote James Madison in The Federalist (55), “every Athenian assembly would still have been a mob.” Madison was deeply suspicious of large numbers, not because they give power to a majority, but because they render an intelligent and dispassionate conversation impossible.

A few days ago, the great Catholic literary critic and anthropologist Rene Girard passed away. Girard too knew about the power of numbers. Mankind, he argued, has always tried to cast out Satan by means of Satan. That is, men are riven with envy and frustration, and instead of settling their enmity by confessing their own sins and identifying with those they believe have hurt them, they seek to resolve their mutual hatreds by uniting in hatred of a scapegoat. They try to purge themselves – for a time it appears to work – by heaping onto the scapegoat their unacknowledged sins, and then destroying it, making it into a sacrifice to their false god.

So it was that the worthy Cato the Elder ended every one of his speeches before the Senate with the words Carthago delenda est, Carthage must be obliterated; yet all the while, the Roman state was growing too large to maintain its republican form, and Italian farmers, who could not grow grain as cheaply as they did in the valley of the Nile, lost their lands and swelled the cities with discontented and easily ignited mobs. The republic would not be destroyed by Carthage. It would be destroyed by nearly a century of civil warfare.

In the summer of 1984 I was living at a Catholic Worker house in Washington, D. C.  Jose Napoleon Duarte had just been elected President of El Salvador. He had long been involved in Salvadoran politics, trying to split the difference between the violent left and the violent right. His record was checkered, but on the whole fairly estimable, particularly in the context of the corruption and bloodshed of Central America. But partisans of the Farabundo Marti National Liberation Front (FMLN) were determined to bring him down by force of arms. Some of them were in Washington at the time, drumming up support for the cause. They showed me a movie about how terrible their opponents were, and I was persuaded. They invited me to take part in a demonstration one Saturday morning on the grounds of the Salvadoran embassy.

I seem to remember that Duarte had contracted cancer and was in poor health. That didn't stop the demonstrators. When I arrived at the embassy, I saw a crowd of about two hundred people, most of them young, many of them American college students, marching around the building, banging on the lids of trash cans, and shouting the same slogans over and over. I caught the countenance of one woman especially, contorted in wrath.

I did not join them. Instead I sat on a stone wall and watched, in a kind of horrible fascination. Only two or three times in my life have I sensed that I was in the presence of evil so real that you could reach out your fingers and feel it, like the cold wet flesh of a creature creeping out of a hole. That was one such time. I went back to the Worker house, shaken. I did not know that Duarte was right. I did know that the demonstrators were wrong – if not politically wrong, spiritually wrong, wrong as human beings. Evil does not cast out evil.

That moment returns to me now. On display are all the characteristics of the madness of a mob.

There is the blank indifference to the suffering they cause to particular human beings. One does not lose one's humanity when one becomes a president of a college, a dean, or a professor. But the scapegoat ceases to be human. It is all right to kill the scapegoat. Louis XVI was not a bad man, but if he had to be ground to bits between the gears of revolution, what is the great loss? Of course, when the thrill of the kill has faded, the killers will have to seize upon another goat, and that is when they turn on one another. The Tsar will not suffice. Kerensky must die too.

There is the utter vagueness of the charges. As long as human beings are sinners, we will have rudeness, stupidity, nastiness, mockery, and, alas, scorn directed at innocent members of this or that group. The protesters do not have real sinners in mind. Instead they have elevated the sin to a cosmic status. It is pervasive, systemic, even unconscious; it is a parody of God Himself. To root it out, therefore, implies incessant revolution, incessant violence, re-education camps, purges, and no rest. No one can escape. To fail to be enthusiastic in the revolution is to be an intransigent opponent; it is to cast oneself on the side of the goat.

There is the multiplication of grievances and of the aggrieved, a parody of what in love God commanded of His creatures in the beginning. Anyone who believes we can come to an end by satisfying a finite number of demands pressed by a finite number of categories of the aggrieved does not understand the dynamic. The problem is not, finally, economic or political. It is spiritual. Suppose a man reviles the marriage of male and female, because he is a psychological cripple and cannot participate in it. Suppose in pity we play along with his madness and pretend that he can feasibly marry another man. Will that then be the end of it? It cannot be. The hatred born of insecurity will shift to another target. We see it playing out before our eyes, sexual disintegration without end.

There is the eager turn to violence. We have witnessed an irony too big to identify, like an elephant three inches from your nose: a feminist professor of journalism crying out for masculine “muscle” to threaten and suppress a journalist trying to film her demonstration. We have witnessed a football team holding a university hostage, threatening to cost it millions of dollars, as if they themselves were not the beneficiaries of a system that rewards football players and not skinny sons of carpenters or electricians. We have witnessed a police force soliciting complaints from aggrieved students, not about crime, but about hurtful words. “You better be thinking happy thoughts,” says the sociopathic little boy Anthony, in the famous episode of The Twilight Zone.

There is the refusal to look inside one's heart. True tolerance does not shrug. It bears with the faults in others, because we know that we have our own faults which they have to bear. This refusal fits well with the elevation of sin to a “system.” So long as evil is located in something too vague to identify and too large to comprehend, each man is free to indulge his sins and to revile the sins of others.

And finally, the heedlessness, the refusal to ask the most obvious question, “What do we expect will come from our actions?” If the aim is to bring friendship to people at odds with one another, it is hard to see how those friendships will be forged from enmity, accusations, shouting, and fury. But that is not the aim. The aim is to purge oneself by stoking the enmity, so that one can feel confident in one's righteousness. Noise and confusion are one's friends, because with silence and peace comes the dread moment when one must face one's demon, who has not after all been driven out. For the political lye has been at work, bleaching the heart clean, so that he invites in six more demons worse than he has ever been, and they have a grand time. I believe the sorry history of the last hundred years provides plenty of evidence for it.

Jesus is the answer. We all know it. That is why we kill Him too.