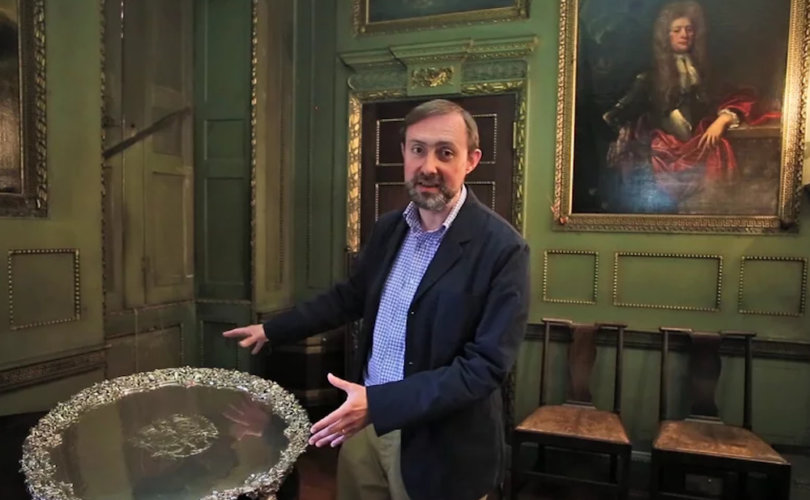 Editor's note: LifeSiteNews' new Scotland-based reporter Dorothy Cummings McLean recently returned from a work trip to Canada to find her husband in need of emergency brain surgery. In this beautiful piece, she recounts their harrowing experience when she got home.

June 30, 2017 (LifeSiteNews) — My husband was gently bobbing on a sea of morphine, but he was still distressed. His blue eyes loomed huge in his gaunt face.

“The Scan,” he repeated. “Don’t forget to ask about the Scan.”

Visiting hours at the Department of Clinical Neuroscience are from 3 p.m. to 5:30 p.m. and then from 6:30 until 8 p.m. It was 7:55 p.m., so I went to see the nurse or — as I suppose I should call her, as this is Britain — the Sister at the nursing station. In front of me was a family of excited Scots, quizzing a squat young nurse.

“How soon can she go on holiday?” asked the elderly man.

“I couldn’t … You’ll have to ask the doctor,” stammered the nurse.

“Just a general idea,” said the man cheerfully. The whole family sounded cheerful. They chirped and twittered like birds. This is Britain, after all. When terrified, the British tend to pack up their troubles in their old kit bags and smile, smile, smile.

“I really couldn’t say,” said the nurse, her eyes shooting here and there.

“It’s probably different for everyone,” chirped an adult daughter.

I knew the nurse wouldn’t talk, wouldn’t hazard a guess, wouldn’t say anything that could be used against her later, so I barged in.

“Pardon me,” I said. “My husband went to Italy two months after his operation.”

Several pairs of dazed eyes turned to me.

“He could fly?” someone asked.

“Oh, yes,” I said, as if I hadn’t spent hours calculating a sea-and-rail route. “Maybe it was more than two months though. He had his operation on March 8 and we went to Italy at the end of May. So more like three months.”

“Did he have a stroke?” asked the old man, the husband, I assumed, of the patient whose holiday was in question.

“No,” I said. “He has hydrocephaly, so they drilled a hole in his brain to drain it.”

The family swung back to their conversation, and I commandeered the nurse. She directed me to another plump nurse who looked confused when I asked about the Scan. I expected that. Brain scans are not scheduled in advance;  patients are slotted in when there is room on the roster. But my husband told me to ask, so I asked. I’m traditional that way. I smiled to show that I understood that my husband’s obsession with the Scan was irrational. The nurse didn’t smile back.

“Who are you?” she demanded.

It’s funny about the holiday conversation. I’ve read so often that on deathbeds people are deeply philosophical, regretting all the time they had not spent with loved ones. On March 7, when Mark and I were stunned to hear that a) he had a brain tumour b) it had blocked the ordinary passage of fluid through his brain and c) he was in immediate danger of death and had to stay in the hospital overnight, mostly what we talked about were holidays abroad. If God had given us children, maybe we would have talked about the children. But God didn’t give us children, so we talked about holidays instead.

Holidays, by the way, are what the British call vacations. I prefer the British word because it rhymes with jolly days; the American word almost rhymes with excavations. The draining of Mark’s brain is a sort of excavation and nothing to do with sunny days in Italy, Mark rushing into yet another ancient church and I looking at my watch to see if it is time for lunch. Maybe holiday isn’t a misnomer for a mere break from routine — maybe holidays really are holy days to rain-soaked Brits. They are certainly a comfort. Even just talking about them is a comfort.

“We’ll go to Florence,” Mark and I promised each other that last time, that time in March when for 20 hours we waited for life or death to claim him. And we did go to Florence. We flew from Edinburgh to Pisa and took the train to Firenze SMN railway station. Mark’s legs gave way under him when he got off the train. Somehow I carried two rucksacks and a husband to a bench. Mark was perfectly conscious. It’s just that his brain and his legs were momentarily no longer on speaking terms.

“Low blood sugar,” we said, and I fed Mark cookies and crackers whenever this happened. But there was no handy explanation why he would wake up in the middle of the night and act on instructions he received in dreams.

“Where are the keys?” he asked, flipping on the light at 3 a.m. “I have to throw the keys out the window.”

Naturally, we phoned our GP when we got back. Naturally, nurses ran interference. It was weeks before we discovered the problem wasn’t “low blood sugar” but a puddle of brain fluid pooling up behind Mark’s eyes again.

“The operation was a failure,” said his surgeon this Tuesday. By then Mark was hallucinating daily. The brain-legs disconnect was typical of hydrocephaly, said the surgeon. He was less confident when he answered my question about the hallucinations. The hospital registrar was more explicit. There would be no fancy small-hole-drilling this time. This time, Mark would have a shunt shoved into his brain and a tube pushed under his skin into his stomach. It would remain there for the rest of his life.

There was no bed ready at the hospital, so after we took a taxi to our priest, and Mark had made his confession and received Holy Communion, we had a slap-up supper at the French restaurant where we celebrate our birthdays, anniversaries and other successes. A French friend joined us, and his youthful presence helped distract us. I reminded Mark of the list of his favourite things we had made while waiting for the surgeon’s plans. Number one was “hot cherry strudel.” Number two was me.

The next day, Mark refused to get out of his pajamas. He wouldn’t put on shoes. He went to the hospital in pajamas, a dressing gown and bedroom slippers. Well, he’s 44 years old; he can do what he likes. He got into his hospital bed and five minutes before he was wheeled away to the operating room, his mother arrived from Dundee. She stayed until he was returned alive to his room, and then she went home.

I stayed until the end of visiting hours. Mark’s stomach hurt. His head hurt. The paper protecting his pillow was speckled with blood. One nurse gave him morphine and another gave him codeine. I rested my forehead on the cold guardrails of his bed.

We’ll go back to Florence, I thought. At least five of the items on Mark’s list can be found in Florence, and if need be I can bake a hot cherry strudel myself.