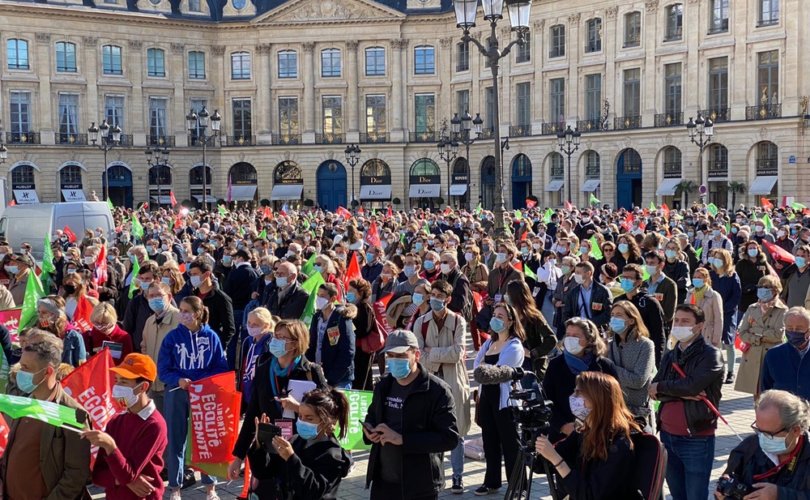 October 13, 2020 (LifeSiteNews) – Thousands and thousands of demonstrators joined over 60 rallies in France’s major cities and towns on Saturday, asking for the withdrawal of a bioethics law presently under discussion in Parliament, or at the very least the indefinite postponement of discussions as long as the COVID crisis and its severe economic and social consequences should require all the government’s attention.

The draft bioethics law is best known for its aim to legalize access to medically assisted procreation (“PMA”) for lesbian couples and single women, including a full refund of the procedure by the French Social Security, but it also affirms the principle of embryo research, which would only be subject to an official declaration of projects instead of needing to obtain prior approval if the text becomes law. This would later inevitably lead to the legalization of surrogate motherhood in the name of “equal rights” for male homosexuals.

The bioethics law also allows genetic engineering of human embryos, the creation of chimeras and the selection of “medicine babies” conceived in test tubes and chosen for implantation if their genetic make-up allows them to be “used” later on for a marrow transplant for a severely ill older sibling.

When the law was adopted in its second hearing by the National Assembly, only a handful of deputies being present, an additional monstrosity was included: the possibility to perform “medical” abortions up to nine months of pregnancy because of “psychosocial distress” of the mother.

The demonstrations were organized by the “Manif pour tous” which played a major role in the fight against the legalization of same-sex “marriage” in 2013, putting up to a million – predominantly youthful – opponents in the streets of Paris.

They were joined by other groups, including the “Veilleurs” (the “Wakers”) and the “Sentinelles” whose actions focus on silent witness or the reading of cultural texts.

COVID restrictions precluded a national march this year. In Paris, only 1,000 people were allowed to join the static demonstration on place Vendôme which besides being the address of the most expensive jewelers in Paris also houses the Ministry of Justice.

In other cities, restrictions are of varying severity in order to stave off a so-called “second wave” of the Wuhan coronavirus which to date, is causing ten times less hospitalizations and deaths than in March and April. Despite the government-fuelled paranoia, scrapping public events altogether has proved impossible, and “protest rallies” are legal. In Versailles, 20 km from Paris, 1,700 demonstrators joined the local static demonstration. In Toulouse, Dijon, and many other towns, demonstrators marched through the streets with the red and green flags of “Marchons enfants” – “Children, let us walk.” Their banners read: “Liberty, Equality, Paternity,” in protest against laws that are effectively erasing fathers from children's’ lineage.

An exceptionally large rally was held in Lyon, with the presence of the National Assembly member Xavier Breton who has been on the frontlines of the fight against this “barbaric” law. As in Versailles, the demonstration included the presence of young girls wearing the characteristic red “Phrygian bonnet” of the French Revolution, another regrettable wink to the “Liberty, Equality, Fraternity” slogan of the 1789 revolutionaries.

In many places, counter-demonstrations were held by LGBT groups. In La Roche-sur-Yon, where a group of youths including students from the Catholic university ICES was targeted by the university authorities in May 2019 for having created a rumpus against an LGBT exhibition in town and later acquitted of all charges by the French courts, the LGBT activists carried signs saying: “Crève l’ICES:” “Die, ICES.”

In Rennes, Brittany, where I was invited to speak to the hundreds of people gathered in a large modern square after having been refused their intended meeting place in front of the town hall, the LGBT activists were allowed to approach the official rally of “Marchons enfants,” separated only by a line of riot police, shouting hateful slogans and trying to cover the legal meeting’s speeches and music with their noise. This was despite the fact that the LGBT counter-demonstrators had obtained permission from the local “prefecture” to gather in the town hall square in the city center where the pro-lifers originally intended to demonstrate. As far as can be known the LGBT activists were not fined for their illegal demonstration.

They did attack one of the speakers at the “Marchons enfants” rally shortly after he left the official platform to catch a train to Nantes, further south, where he was also expected to speak: Guillaume Bernard, a respected law historian and university lecturer at the ICES, was carrying a demonstration flag that was stolen by LGBT activists. Luckily there was no further harm done as he was escorted by young men of the demonstration’s security force.

Bernard had set the tone of the rally by underscoring that it is useless to complain about embryo research and late-term abortion if one is not prepared to oppose abortion. The official “party line” of the “Marchons enfants” demonstrations was to insist on fighting artificial procreation “without fathers” and surrogate motherhood. The full pro-life stance is seen as potentially divisive and many more mainstream opponents against the latest transgressions are prepared to campaign for a return to the more stringent conditions of the original 1974 abortion law named “loi Veil” after the woman politician who defended it in Parliament as Health minister at the time.

Guillaume Bernard underscored that we should not submit to what is called the “ratchet effect” in France: combatting each new transgression but taking the existing culture of death laws as a given against which it would be too late to campaign.

This was also the stance taken by French philosopher Thibaud Collin who observed, days before Saturday’s demonstrations, that the Veil law was adopted as a “lesser evil.” “But killing the innocent can never be a lesser evil,” he wrote.

In fact, the addition of the nine-month abortion exception in the bioethics law, plus the recent adoption of a law extending free access to abortion from 12 to 14  weeks gestation, put the abortion issue at the center of French politics, and will hopefully lead to a more conscious and coherent expression of its convictions by the pro-life movement in France.

Having also been invited to express my views on the remodeling of the bioethics laws, I was also careful to insist on this aspect, noting that it is not only paternity that is being negated, but that our very language is emasculated by the current refusal to affirm that “abortion kills an unborn child” out of a desire not to seem cruel. Man is being accused of “ransacking” nature, but it is in fact human nature that is being ransacked.