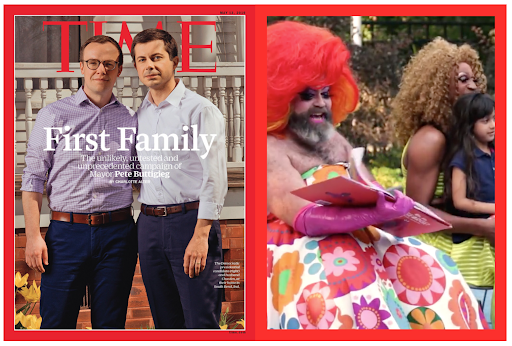 WASHINGTON, D.C., May 6, 2019, (LifeSiteNews) — After the dissolution of my marriage in the late 1990s, my first strategic move to “come out of the closet” was to reach out to a Washington Post investigative reporter who had once interviewed me. He was the only one I could think of who might possibly be gay. I was right.

Over lunch in a restaurant in Washington, D.C.’s Dupont Circle, he told me two things that immediately resonated as true:

First, gay men are often very successful in their professions because they try harder than others in order to prove themselves. I would quickly discover this to be an accurate description of the many gay men I met who worked at high levels in the White House, the Pentagon, on Capitol Hill, and as heads of large quasi-governmental agencies.

Presidential candidate and South Bend Mayor Pete Buttigieg fits that mold: He transformed himself from a dorky kid to a Rhodes Scholar and Oxford crew club member. Buttigieg returned to the town where he grew up and was elected mayor before reaching his 30th birthday. The mayor left South Bend’s City Hall in 2014 when, as a Naval reservist, he was deployed to the Afghanistan War. He’s also an accomplished pianist.

Second, my mentor explained that the fantasy some gay men nurture of finding the “right guy,” settling down into a monogamous “marriage” in a suburban home with a white picket fence and a couple of dogs in the yard, a station wagon with vinyl wood paneling on its sides sitting in the driveway and maybe even a couple cute kids in the back seat is a pipe dream, illusory, and self-deceiving.

Nowadays, that illusion is not just self-deceiving: It’s a deception that grips the western world, epitomized in TIME Magazine’s recent cover photo of Messrs. Buttigieg with “First Family” emblazoned across their chests. Granted, there is no white picket fence in sight, but the white front porch balustrade behind the two conservatively dressed gentlemen is a fine substitute. The normalcy, the downhome “American-as-apple-pie” familiarity, is overwhelming. You can almost smell the hot dogs roasting on the charcoal grill just outside the frame of that picture.

Except, well, no, not really.

The cover photo is a carefully posed illusion. The story on the pages inside the magazine is nothing more than a fawning 4,000-word footnote to the TIME cover. The picture soon to be seen on newsstands and already plastered all over social media and outlets like The Drudge Report is the story.

Upon publication of the TIME article, Pete’s “husband,” Chasten Buttigieg, tugged at heartstrings with a gay Horatio Alger tweet: “11 years ago, when I came out, I didn’t think there was a place for me in this world. 10 months ago we said ‘I do.’ 1 month ago we said ‘let’s do this.’ Today”:

What could be more American?

Yet the intent of this heartland hominess is really no different from the most outrageous pictures you have seen of “Drag Queen Story Hours” at your local public library, with men decked out in flamboyant makeup, big wigs, and gowns, reading to small children.

The two images are opposite sides of the same wooden nickel.  Two extremes meant to accomplish the same thing: to desensitize the American public to all things LGBT.

Nothing about the story-reading drag queens or the Buttigieig portrait is innocent or benign, helpful or praiseworthy.

The drag queens mock womanhood and set up small children to question their gender; The gay presidential candidate and his “mate” mock and undermine manhood, striking a pose loaded with regressive subtext.

A new Declaration of Independence

This TIME Magazine cover is the most misogynist, stridently anti-woman proclamation by a national media outlet in the new millennium.

Misogyny is condemned in our society, yet there is one segment of society which practices misogyny to hitherto unheard of degrees and rarely gets called out for it: gays.

Same-sex marriage, bolstered by the new ability to engineer children through extraordinary scientific/medical means, is tantamount to a Declaration of Independence from Half the Human Race for gay men.

For gay couples who seek to engineer children to accessorize their “marriages,” the surrogate mothers of those children are discarded as soon as the child is born. In gays’ eyes, women clearly serve no purpose in raising children.

It’s not just that Mom is absent: Quite tragically, Mom never actually existed because Dad or Dads willed her out of the picture.  No amount of love from a Dad or Dads can compensate for that.

Pete Buttigieg has already said, “We're hoping to have a little one soon.” If the Buttigiegs contract to “have” children, their kids will bear in their souls the knowledge that they were created precisely to be deprived of a mom in order to fill the emptiness in their two daddys’ lives and, perhaps, to increase their chances of moving into the White House.

The superfluity of women is communicated on a daily basis by gay dads to their children, something that is ignored by the LGBT world and stimulates no intellectual curiosity by their supporters in the worlds of social science and the media.

To gays, women are nothing more than breeders. When in the history of humanity have women been held in greater contempt?

The Buttigieg candidacy is the epitome of patriarchy because the very nature of the candidate’s life devalues women and redefines children as chattel. By default, it mocks and erases maternity. What could be more damaging and divisive for society? Yet the politically correct world remains absolutely enthralled with gay fatherhood.

Americans need to look beyond the glossy pictures and the “hooray for the gay guy”  rhetoric and consider the unintended consequences the Buttigieg candidacy — and perhaps, presidency — will precipitate. Most pundits and members of the media won’t dare explore the likelihood of negative outcomes, and won’t ask unpopular, politically incorrect questions. They just won’t.

At the outset of the TIME Magazine article, the author asserts, “To some Americans, Buttigieg may just be the man to vanquish America’s demons.”

On the contrary, Buttigieg’s candidacy promises to unleash a horde of new Asmodean demons.