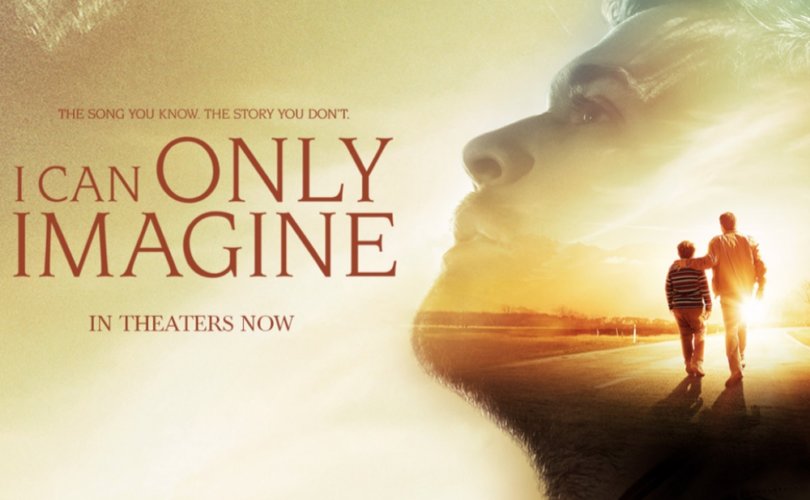 March 19, 2018  (LifeSiteNews) – Hollywood is no doubt flummoxed by the news that a low budget independent Christian message film is outperforming an expensive, highly touted big studio production about a high school boy ‘coming out’ as gay.

Variety, daily staple of the entertainment industry, reported on Friday:

The nation’s moviegoers look to be turning out in bigger numbers for a Christian-themed independent film than for the first mainstream teen movie with a gay main character. Roadside Attractions’ “I Can Only Imagine,” based on the story of the biggest-selling Christian  song of all time, is looking at an estimated $14 million-plus for the weekend from 1,629 locations, far outdoing earlier estimates of $2 million-$8 million.

I Can Only Imagine is described on its website as “A gripping reminder of the power of forgiveness,” that “beautifully illustrates that no one is ever too far from God’s love—or from an eternal home in Heaven.”

Meanwhile, Fox’s “Love, Simon” is garnering attention for featuring a love story centering on a teenage boy coming out, and is looking at a $12 million-plus weekend on 800 more screens than the faith-based opener.

Did you get that?  The little Christian film going head-to-head with the big studio produced gay-themed movie is grabbing more viewers––and 15% more revenue––despite the fact the gay “coming out” movie is being shown in 50% more theatres.

And think about this: The much heralded Call Me by Your Name which opened last Thanksgiving, is a homoerotic story of a man and boy whose relationship turns carnal.  Universally praised by reviewers as “the most romantic movie of the year” and “an instant classic,” the movie has earned about $17 million since its debut.

Put differently: After 110 days, Call Me by Your Name had made a little more than what I Can Only imagine will have earned in just 3 days.  Evidently, movie fans are drawn more to stories of redemption than they are to budding pederasty.

And when the movie, Paul, Apostle of Christ opens on March 23––Palm Sunday weekend––it’s mountain of box office receipts will most likely bury both gay-themed movies.

LGBT America, after experiencing one stunning success after another, has lost its mojo.

The gay and lesbian cause owes it success to a strategy laid out in the 1989 manifesto, After the Ball, which presented a comprehensive plan to establish gays as normal in order  to secure broader acceptance and rights.  It was followed “to a tee” and it worked.  Here is a key element of the strategy:

You can forget about trying right up front to persuade folks that homosexuality is a good thing. But if you can get them to think it is just another thing—meriting no more than a shrug of the shoulders—then your battle for legal and social rights is virtually won.

Constant talk builds the impression that public opinion is at least divided on the subject and that a sizable bloc — the most modern up-to-date citizens — accept or even practice homosexuality.

. . . The main thing is to talk about gayness until the issue becomes thoroughly tiresome.

Now that they’ve achieved what they set out to do, homosexuality has veered far beyond being “thoroughly tiresome.”  LGBT, Inc. has gone from seeking acceptance; to searching for praise and admiration; to demanding fealty and obeisance.  It seems they can no longer exist without constant fawning attention.  The “love which dare not speak its name” apparently doesn’t know when it’s time to shut up.

So much for just wanting acceptance.

The overstepping is visible everywhere, not only in the entertainment industry, but also in sports and on the United States Supreme Court docket.

LGBT proponents are stumbling, squandering goodwill carefully built up over decades.  They now seem intent on building up ill-will.  Some prominent gay pundits recognize this and warn against it, saying “the gay rights movement is undoing its best work.”

They are being ignored.

As it turns out, the gay manifesto, After the Ball, could have used one more chapter:   “How to Know When Enough is Enough.”