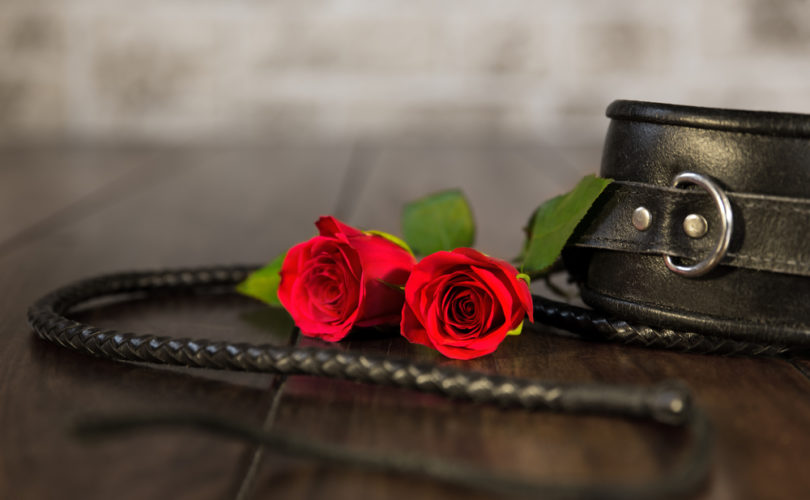 Because nothing says love quite like a whip and restraints, right?Shutterstock

It’s pretty depressing when you realize that, in 2014, many people seem to think that destruction of human dignity is a small price to pay for an orgasm.

In response to the defenders of this trash, let me make just a few points.

Anyone who works with victims of domestic and sexual assault will tell you that just because someone permits something to happen or doesn’t extricate themselves from a situation doesn’t mean it isn’t, in fact, abuse. Only when it comes to sex are people starting to make this argument, so that they can cling to their fetishes and justify their turn-ons. Those women who defend the book because they think it spiced up their sex life are being incredibly selfish and negligent, refusing to think about how this book could affect other women in different situations, as well as young and impressionable girls.

In his book on batterers, Lundy Bancroft provides a list of potentially dangerous signs to watch out for from boyfriends. Needless to say, Christian [Grey of 50 Shades of Grey] is the poster boy of the list, not only with his jealous, controlling, stalking, sexually sadistic behavior, but his hypersensitivity to what he perceives as any slight against him, his whirlwind romancing of a younger, less powerful woman, and his Jekyll-and-Hyde mood swings. Any one of these is potentially dangerous, but a man who exhibits them all is lethal.

The most likely real-world ending of Fifty Shades of Grey is fifty shades of black and blue. The awful truth in the real world is that women who partner with a Christian Grey often end up hightailing it to a battered women's shelter with traumatized kids in tow. The less fortunate end up in graveyards.

While intimate partner violence (IPV) affects 25% of women and impairs health, current societal conditions—including the normalization of abuse in popular culture such as novels, film, and music—create the context to support such violence.

Emotional abuse is present in nearly every interaction, including: stalking (Christian deliberately follows Anastasia and appears in unusual places, uses a phone and computer to track Anastasia’s whereabouts, and delivers expensive gifts); intimidation (Christian uses intimidating verbal and nonverbal behaviors, such as routinely commanding Anastasia to eat and threatening to punish her); and isolation (Christian limits Anastasia’s social contact). Sexual violence is pervasive—including using alcohol to compromise Anastasia’s consent, as well as intimidation (Christian initiates sexual encounters when genuinely angry, dismisses Anastasia’s requests for boundaries, and threatens her). Anastasia experiences reactions typical of abused women, including: constant perceived threat (“my stomach churns from his threats”); altered identity (describes herself as a “pale, haunted ghost”); and stressful managing (engages in behaviors to “keep the peace,” such as withholding information about her social whereabouts to avoid Christian’s anger). Anastasia becomes disempowered and entrapped in the relationship as her behaviors become mechanized in response to Christian’s abuse.

Our analysis identified patterns in Fifty Shades that reflect pervasive intimate partner violence—one of the biggest problems of our time. Further, our analysis adds to a growing body of literature noting dangerous violence standards being perpetuated in popular culture.

The definition of sadism is “enjoyment that someone gets from being violent or cruel or from causing pain, especially sexual enjoyment from hurting or punishing someone…a sexual perversion in which gratification is obtained by the infliction of physical or mental pain on others.”

It seems the Sexual Revolutionaries have gone from promoting “safe sex” to “safe words”—just in case the pain gets too rough. And none of them seem to be volunteering information on just how a woman is supposed to employ a safe word with a gag or bondage headgear on.

But who cares, right? Just one more casualty on our culture’s new Sexual Frontier.

That’s total garbage and they know it. I’ve met multiple girls who were abused like this inside of relationships. Hotels are offering “50 Shades of Grey” packages replete with the helicopter and private suites for the proceedings. According to the New York Post, sales of rope exploded tenfold after the release of the book. Babeland reported that visits to the bondage section of their website spiked 81%, with an almost 30% increase in the sale of things like riding crops and handcuffs.

I could go on, but I won’t. As Babeland co-founder Claire Cavanah noted, “It’s like a juggernaut. You’d be surprised to see how very ordinary these people are who are coming in. The book is just an explosion of permission for them to try something new in the bedroom.”

If the answer is yes to either of those, someone should call social services.

This book and the sadism it promotes are an assault on human dignity, and most of all an assault on the worth and value of girls and women. Please consider the impact you will have on your daughters and the vulnerable and confused people around you when you read and promote this book. Anastasia Steele is, thankfully, a fictional character. But real girls are facing these expectations and demands from a culture that elevates a sexual sadist to the level of a romantic hero. Ask yourselves if you want their “love” and “intimacy” to include sadism and domination, or real respect.

Because you can’t have both.