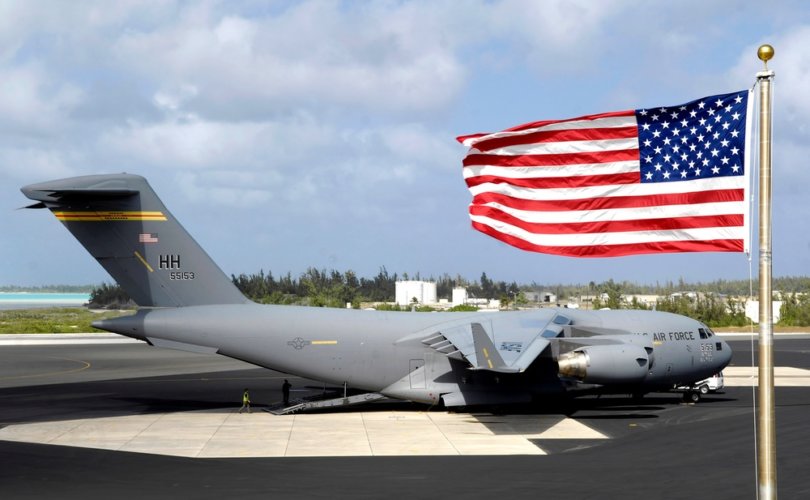 January 12, 2008 - A C-17 Globemaster III sits on the flightline at Wake Island. The C-17, from the 15th Airlift Wing, Hickam Air Force Base, Hawaii, brought members of Pacific Air Forces headquarters to conduct a site survey of the island.Getty Images / Stocktrek Images

(LifeSiteNews) – The armed forces have been a project of the gender ideologues for some time, perhaps because they are so overwhelmingly masculine. They still are, and the U.S. military is still easily the most powerful in the world. But that hasn’t stopped the ideologues from making progress. “Pride” is now celebrated by many branches (remember the U.S. Marines’ “Pride bullets?”); there is all sorts of babble about transgender soldiers, as affirming individual identity rather than creating a cohesive unit were the purpose of the military; there was that cringeworthy CIA recruitment video series. (Unsurprisingly, military recruitment is at record lows.)

The latest news on the culture front comes from the U.S. Pacific Air Forces (PCAF), the division assigned the role of countering or confronting China. According to the Washington Free Beacon, the PCAF has “ordered its senior leaders and commanders to stop using gender pronouns in written formats, saying the shift to more neutral language will help improve the fighting force’s ‘lethality.’” According to an email sent in May at the Andersen Air Force Base in Guam: “We must embrace, promote and unleash the potential of diversity and inclusion.” Specifically, commanders are told: “Do not use pronouns, age, race etc.”

Why? Because: “Competition against near-peer adversaries requires a united focus from the command, the joint team, and our international partners. Welcoming and employing varied perspectives from a foundation of mutual respect will improve our interoperability, efficiency, creativity, and lethality.” According to the Washington Free Beacon, this “policy change is part of a larger effort by the Biden administration and the U.S. military to foster what it says is a more culturally sensitive environment.”

A spokesman for Andersen Air Force Base confirmed the authenticity of the emails: “Unleashing the potential of diversity and inclusion at all levels is a Pacific Air Forces’ priority and something we strive for at Andersen. Diversity and inclusion are force multipliers and warfighting imperatives that enable our competitive advantage against near-peer adversaries.” There was no explanation as to how, exactly, “diversity and inclusion” are “force multipliers” or specifically, how they “enable our competitive advantage” against the rising Chinese superpower which, it goes without saying, doesn’t particularly care about such things.

As long as the Biden Administration continues to push for these things, we are likely to see recruitment depressed as young men who want to join the military for traditional reasons are turned off by sensitivity trainings, gender ideology, and other progressive agendas. Most, it is fair to say, do not join the military profession to get lectured by academics on queer theory. It is also likely that this is simply the tip of the iceberg. Anyone who thinks that these new guidelines are a) all that the ideologues intend for the military or b) as far as they’re likely to go is kidding themselves. For now, no pronouns. Tomorrow, the introduction of the many new pronouns cropping up almost weekly.

So look forward to more prestigious American institutions beclowning themselves with pronoun nonsense. Like this much-mocked Twitter post by TIME Magazine, which was founded by a devout anti-Communist in another country far, far away: “TIME spoke to ‘Gender Queer’ author and illustrator Maia Kobabe on about eir work, the efforts to restrict access to eir writing, and what ey make of the current cultural moment.” Yes, I spelled all of that right. TIME Magazine is using the made-up pronouns “eir” and “ey,” which virtually nobody has ever heard of. But don’t worry – just like the U.S. Air Force division tasked with combatting China is embracing “diversity and inclusion” to improve their warfighting advantage, TIME Magazine is spoon-feeding its audience that nonsense in the name of truth and accuracy.