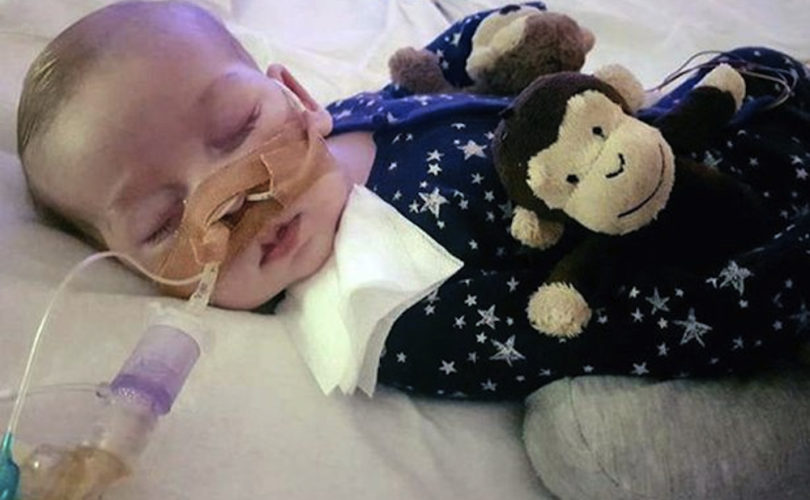 August 4, 2017 (LifeSiteNews) – Charlie Gard died just a week shy of his first birthday thanks to a healthcare and legal system that viewed him as an unproductive ward of the state rather than the son of his loving parents, Chris Gard and Connie Yates.

Charlie had a rare mitochondrial disease and breathed with the help of a ventilator. Chris and Connie wanted to bring their son to the U.S. for experimental treatment, but Great Ormond Street Hospital (GOSH) wanted to pull his life support instead.

The issue at hand wasn't money – Chris and Connie raised more than $1.5 million from private donations to transfer and treat Charlie. It was whether Charlie's parents or hospital bureaucrats had the right to determine his course of care.

The court, GOSH, and everyone involved acknowledged that Chris and Connie were loving, good parents. This wasn't a case where the state had any interest in superseding their rights.

GOSH says it doesn't believe in a world where only parents make decisions and speak for their disabled, minor children.

“A world where only parents speak and decide for children and where children have no separate identity or rights and no court to hear and protect them is far from the world in which GOSH treats its child patients,” it argued in court.

“They believe that only they can and should speak for Charlie and they have said many times that they feel they have been stripped of their rights as parents,” GOSH argued.

The supposedly “independent” government-appointed advocate for Charlie in this crucial bioethics case was a euthanasia activist.

An Orwellian institution will never love a child the way his parents, who created, nurtured, and raised him, do. In Charlie Gard's case, it seems hospital administrators were hard-headedly determined to prove that they, strangers to this baby, had the right to take him from the custody of his parents and end his life. They didn't think his “existence” was of value to the world, and offered him (and them) “no benefit.”

Rest in peace, Charlie. I'm sorry the world failed you so badly. Intercede for us from heaven so that this terrible injustice never happens again.