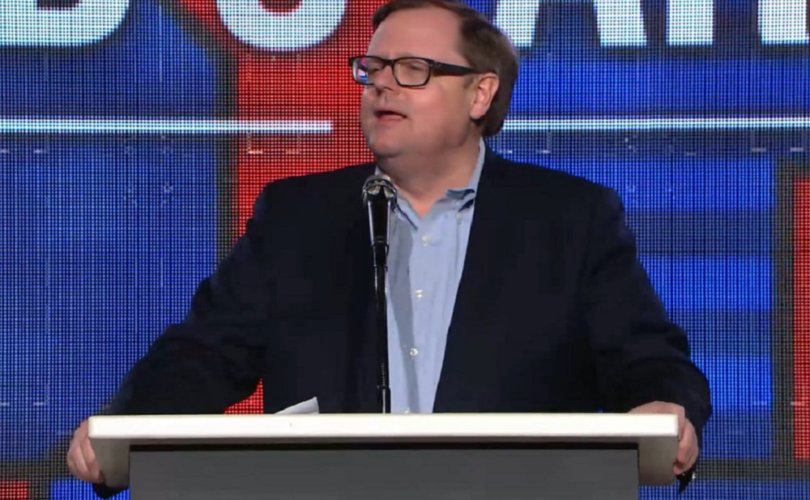 “In my final year at Fox News Channel, my editors told me that I could no longer write any columns defending religious liberty against the LGBT movement,” wrote Starnes in a Facebook posting.

— Article continues below Petition —
PETITION: Ask Pope Francis to clarify and rectify scandalous remarks on homosexual civil unions
Show Petition Text
22746 have signed the petition.
Let's get to 25000!
Thank you for signing this petition!
Add your signature:
Show Petition Text

“They refused to publish any column that reflected negatively on LGBT activists,” said Starnes. “That’s when I figured my time at the Fox News Corner of the World was nearing an end.”

Fox News’s trend toward accepting homosexual romance and sexual activity as fully normal, and the move toward silencing social conservatives who object — the “gaying” of Fox News — has been clearly visible for anyone who cared to pay attention for quite some time.

“It’s bad enough that Fox News supports same-sex marriage. Careful observers have been sounding the alarm on that for years,” said Peter Wolfgang, executive director of the Family Institute of Connecticut.

“But Todd Starnes’ post reveals more than just that,” Wolfgang told LifeSiteNews. “He has exposed the fact that when the LGBT agenda clashes with religious liberty, Fox News will side with the cultured despisers of our faith.”

“It is a betrayal of the viewers who built the network and made it the success it has been,” he said.

“Big Gay could never win in a democratic venue, which is why they went to the courts to impose their issues on all of us. And now, they work feverishly to silence dissenters,” Austin Ruse, author of the upcoming book No Finer Time to be a Faithful Catholic (Sophia Institute Press), told LifeSiteNews.

“I am shocked but not surprised that Fox News silenced Tod Starnes on this issue,” said Ruse. “After Obergefell other media outlets announced they would no longer allow dissenting voices in op-eds or letters to the editor. They say such views are tantamount to arguing for slavery. We must persevere, be brave, and daring. Speak truth always.”

In early 2015, Bret Baier pulled out of a speech he was scheduled to deliver at the Legatus Summit, a gathering of Catholic business leaders, at the request of the Fox News Channel executives.

Baier was among three high-profile speakers to withdraw from the event after the homosexual activist group “Good As You” campaigned against Legatus, calling it a “very anti-gay organization of Catholics.” The other two were actor Gary Sinise and Molson Coors board chairman Peter Coors.

In reality, Fox News and Baier were reacting against the presence of another man slated to speak at the conference, Paul Darrow, a lifelong gay man and former international male model who converted to Catholicism, now lives a chaste life, and is a member of the Courage apostolate.

By pulling out of the event, Fox and Baier delivered a loud and clear message that they favor sodomy for gays over and above chastity.

“I am a lifelong Mass-attending Catholic — I’m a lector at my parish. I consider myself to be in line with my Church on most things,” Baier wrote. “This isn’t about me.”

“[D]escribing homosexuality as a ‘disorder’ and talking about ways to ‘cure’ people from it — does not seem to line up with the loving, accepting Church that I know,” Baier said. “Nor does it match up with how Pope Francis has talked about the issue recently.”

Yet sometimes — not all — the pope’s utterances about being gay don’t match up with the Church’s teaching and pastoral wisdom and, in fact, sharply challenge both.

When Fox News political analyst Guy Benson announced his “engagement” to a man Twitter in 2018, Bret Baier tweeted back:

Guy — congratulations! It takes guts to ask in a wobbly boat — all the best. Thanks for sharing the moment. Love is cool. https://t.co/R4tz8kAZh2

Other Fox News personalities, including Jonah Goldberg, also offered congratulations to Benson, as did folks at The Wall Street Journal, The Washington Examiner, and National Review.

In so doing, they reveal they are not true conservatives, and that the Catholics among them are not fully dedicated to Catholic teaching. They have a soft spot for romantic sodomy.

Our conservative urban elites — once reliable brethren and fellow travelers — have drifted into libertarianism in order to more comfortably accommodate their sophisticated secular values.

As far back as 2002, former Fox News heavyweight Bill O’Reilly said in an interview with gay-oriented The Advocate that he “couldn't care less, to tell you the truth. … You want to get married? Knock yourself out. Go to Vegas; have a good time.” Asked if he would oppose homosexual “marriage” if it were legalized, O’Reilly said, “If you can get that changed, I’m not going to jump up and down and say I think it’s wrong, because I don’t.”

Elsewhere, he explained, “I take a libertarian position on issues like gay marriage.”

O’Reilly, like Baier, is Catholic, yet LGBT ideology has lived more loudly in him, too,  than his Catholic faith.

Of all the Fox News Channel programming, The Five has had the highest density of pro-gay sentiment among its regulars: former host Eric Bolling, Dana Perino, Kimberly Guilfoyle, Greg Gutfeld, and Geraldo Rivera.

Lesbian Tammy Bruce has filled in for Tucker Carlson on his show. Perhaps ironically, Bruce has been more circumspect about same-sex “marriage” and the heavy-handed suppression of religious liberty of Christian conscientious objectors than some of her Catholic colleagues at Fox.

In addition to Benson and Bruce, there are others leading active gay lifestyles at Fox News.

Amy Walter, national editor of The Cook Political Report, who has often been part of Baier’s Special Report panel, has been “married” to a woman since 2013.

Shepard Smith, who officially came out in a speech at his alma mater a few years ago, said being gay is “not a thing. I go to work. I manage a lot of people. I cover the news. I deal with holy hell around me. I go home to the man I’m in love with.” His longtime “boyfriend,” a former production assistant on his show, was less than half the middle-aged network anchor’s age when they began dating.

Smith’s homosexuality was long known to his associates, and his pro-LGBT attitudes occasionally leapt out at viewers in editorial comments long before his “coming out.”

In 2012, Smith ridiculed “Chick-fil-A Appreciation Day,” calling it a “National Day of Intolerance.”

Fox News presents itself as “Fair and Balanced,” except when it comes to reporting on religious liberty and LGBT issues.