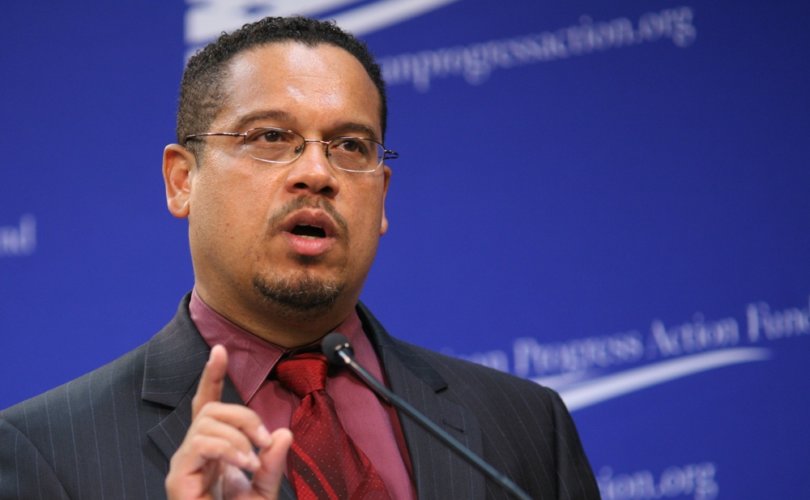 July 24, 2018 (LifeSiteNews) – It’s good to see that Rep. Keith Ellison’s shocking letter to Amazon, calling for blatant censorship, has been removed from his website. But has he publicly renounced his letter, both in spirit and in substance? If not, then Ellison’s missive represents just one more example of the radical left’s attempt to suppress and silence opposing views.

In his own words, “I would like to know whether Amazon is committed to ceasing the sale of all products that promote hateful and racist ideologies. For a company with a policy prohibiting the sale of ‘products that promote or glorify hatred, violence, racial, sexual, or religious intolerance or promote organizations with such views,’ there appear to be a disturbing number of groups with hateful, racist, and violent agendas making money using Amazon’s platform.”

What’s so bad about this request? Isn’t all racist violence bad?

Of course it is, but that’s not the big problem. As Robert Spencer (not Richard Spencer) pointed out on PJ Media, Ellison is “demanding that [Amazon CEO Jeff Bezos] no longer sell at Amazon any material that the Southern Poverty Law Center (SPLC) dislikes. Yes, it has come to this.”

So, it’s not just a matter of insisting that Amazon remove swastika-celebrating neo-Nazi material. It’s much more than that. If the SPLC doesn’t like you, you shouldn’t be able to sell your material on Amazon.

It is a literal example of the inmates running the asylum, as the highly-biased SPLC, which I dubbed America’s most dangerous hate-group, becomes the arbiter of right and wrong.

As I asked, “Which is more insidious, the enemy that you recognize or the enemy that appears to be your friend? Which is more dangerous, a rag-tag bunch of poorly-funded White Supremacists or a well-organized, massively-funded, ‘civil rights’ organization which demonizes Christian conservatives? And which lie is more likely to spread, one that is false from beginning to end or one that mixes falsehood with truth?”

On the positive side, the SPLC is getting more and more discredited by the day, with lawsuits rightly launched against it and major governmental organizations (like the FBI) no longer relying on SPLC reports.

On the negative side, massively influential companies like Facebook, Google, Twitter, and Amazon rely on the SPLC to help determine what organizations are hate groups. This is beyond chilling.

In fact, in May, it was reported that Amazon booted the Alliance Defending Freedom (one of the most prestigious and successful law firms in the nation) from benefiting from its charitable Amazon Smile program. All this at the recommendation of the SPLC. (Note also that another highly respected Christian law firm, Liberty Counsel, is on the SPLC’s hate group list. As for the SPLC, on July 4, the Washington Post ran a story about the ADF titled, “Inside the Christian legal powerhouse that keeps winning at the Supreme Court.”)

What, then, would it look like if Amazon heeded Rep. Ellison’s request? (As of July 24, 8:00 PM, EDT, the link to his letter on the EllisonHouse.Gov website read: “The requested file was not found.”) What would happen if Amazon no longer sold the materials associated with those marked “hateful” by the SPLC?

At one point it would mean you could not buy Dr. Ben Carson’s book Gifted Hands, since he was on their hate list. Amazon is not the place for you!

Until a few months ago, it would mean you could not buy books by “Ayan Hirsi Ali, the Somali victim of genital mutilation, and Maajid Nawaz, a Muslim militant-turned-reformer.” (In the words of the Washington Examiner, “Imagine Ayaan Hirsi Ali's surprise to find that a career spent fighting extremism had landed her on a list of extremists.” As for Nawaz, he settled with the SPLC after they apologized to him and offered him $3.375 million.)

And as of today, it would mean you could not buy books on Amazon written by Pamela Geller, Robert Spencer, and Frank Gaffney, Jr., all of whom the SPLC has branded anti-Muslim extremists.

Not only so, but you could not buy books by Tony Perkins, head of the FRC, or Tim Wildmon, head of the AFA, since their organizations have been categorized as anti-LGBT extremists. (For the record, speakers at FRC events have included presidents, senators, governors, and foreign dignitaries like Prime Minister Netanyahu. As for the AFA, it is one of the most respected, conservative Christian organizations in the nation.)

Other authors who would be banned include Christian historian David Barton, journalist Joseph Farah (founder of WND.com), and yours truly. All of us were part of the SPLC’s laughable, 2012 list, “30 New Activists Heading Up the Radical Right.” (Also included in the list were some genuine violence-supporting hate-mongers, making the list all the more confusing.)

And in keeping with the SPLC’s inconsistency and inefficiency, I’m still listed in this 2012 article, although the page linking to me has been marked “Access Denied” for several years no. Either my alleged transgressions are so top secret that the public cannot know about them, or else the SPLC recognized their error in listing me but failed to apologize or inform. Who knows?

We should also note that the common source of inspiration and authority for the ADF and Liberty Counsel and the FRC and the AFA and Carson and Barton and Farah and me is the Bible. Perhaps that should be banned as well?

If radical ideologues like the SPLC call the shots, the sky is the limit.

As for Keith Ellison, who is a Muslim, he ought to revel in America’s liberties. Otherwise, it could be the Quran that is banned next. As the Latin motto says, “Cave quid volunt.” (Be careful what you wish for.)