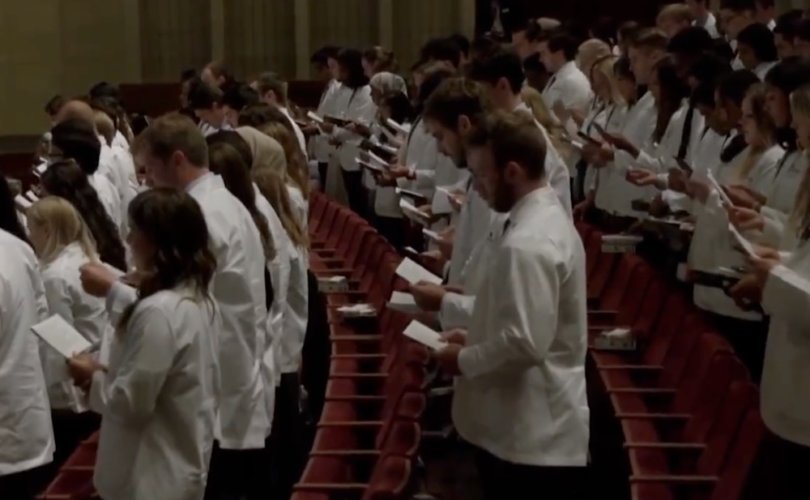 (LifeSiteNews) – Conservatives have been banging on about the leftist drift of universities for so long that it scarcely seems necessary to write yet another column on the decline of our academies of higher learning. From William F. Buckley’s God and Man at Yale to Nathan Harden’s God and Sex at Yale, scores of fat books have been written on the Left’s long march through our institutions. When I was doing my undergrad ten years ago, the political correctness was insufferable — unless you found the right profs (and conservative students compared notes constantly). These days, many profs ask you to declare your pronouns at the beginning of the semester and include theirs in their syllabi.

All that to say that crazy stuff on campus might be bread and butter for culture war commentators, but very few folks are actually shocked when they pen a column about how shocked they are about the latest. But I’ll admit to be a bit bug-eyed at journalist Christopher Rufo’s latest revelation — a video of University of Minnesota medical students swearing a public oath to “honor all Indigenous ways of healing that have been historically marginalized by Western medicine” and to fight “white supremacy, colonialism, [and] the gender binary” to boot. (The colonialism stuff was there when I was studying history at university, of course — but fighting the gender binary?)

University of Minnesota medical students swear an oath to “honor all Indigenous ways of healing that have been historically marginalized by Western medicine” and to fight “white supremacy, colonialism, [and] the gender binary.”

They are being inducted in the cult of CRT. pic.twitter.com/v3YYKBq9OW

“With gratitude…we stand here today in front of our friends, families, peers, and communities who have supported us in reaching this milestone,” Dr. Robert Englander intoned as the students chanted creepily after him. “Our institution is located on Dakota land. Today, many Indigenous people throughout the state including Dakota and Ojibwe call the Twin Cities home. We also recognize this acknowledgement is not enough. We commit to uprooting the legacy and perpetuation of structural violence deeply embedded in the healthcare system. We recognize inequities built by past and present traumas rooted in white supremacy colonialism, white supremacy, the gender binary, ableism, and all forms of oppression.”

As Rufo noted: “The speaker is Robert Englander and his credentials are impeccable: MD, Yale Med School; MPH, Johns Hopkins; Residency, Children’s National Med Center; Fellowship, Harvard Med School; And he’s suggesting that shamanism and Western science are equally valid medical practices.” That, and comparing “the gender binary” to “white supremacy” and calling it “oppression” — man. People spend a lot of money going to universities like that, only to begin their tenure by chanting out a string of progressive commitments that include rejecting the idea that humans are either male or female. How much faith does that give you in the medical system? How many of these students could opt out of this charade without torching their academic careers right at the start?

One more thing: I’ve always wondered how speakers like Englander get away with these “land acknowledgements” when the obvious response to them is: Well, why don’t you give it back then? If your institution is on unceded territory that was stolen violently, what’s preventing you from handing over the keys and signing it back over? Nobody’s going to do that, of course. The truth is that these land acknowledgements are genuinely insulting to Indigenous people, because they are a stand-in for actually doing anything meaningful. Talk is cheap — and so are weird loyalty oaths that only demand you give up your dignity and your principles. Progressives would rather break the binary than the bank.