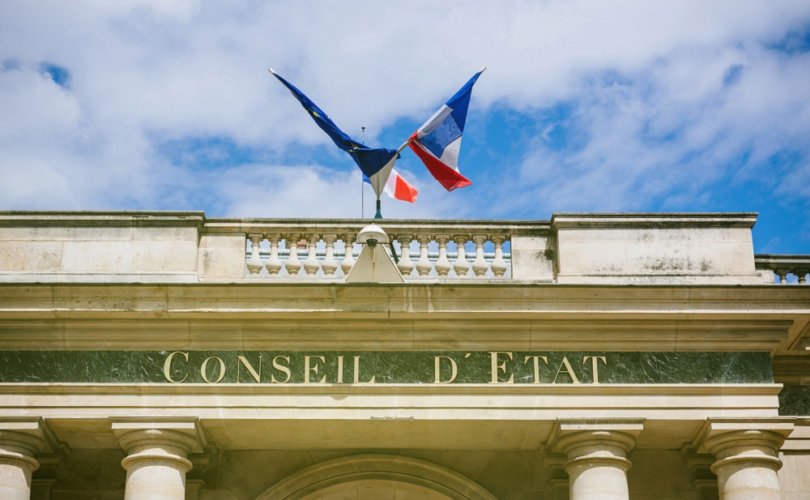 May 18, 2020 (LifeSiteNews) — This afternoon, the French Council of State (Conseil d’Etat) ordered the prime minister, Edouard Philippe, to modify the decree prohibiting public worship under the sanitary state of emergency within eight days, in a landmark decision that recognizes the specific rights attached to the “fundamental liberty” of public worship. By next week, churches in France should be allowed to organize public Masses and other religious ceremonies, which have been on hold since the second Sunday of Lent because of the COVID-19 pandemic, on the grounds that their prohibition is no longer proportionate to the “war on the coronavirus” declared by President Emmanuel Macron on March 16.

France’s highest administrative authority declared that the right to join a gathering or a reunion in places of worship — and not only that of praying at home or praying individually in such a place of worship — “is an essential component of the freedom of worship,” and curtailing such gatherings is “a grave and manifestly illegal violation” of that freedom.

The decision is a slap in the face for the French government, which has shown the darkest side of its secularism in maintaining strict measures against religious worship, and especially Catholic worship, despite a wide-ranging “deconfinement” that has allowed primary schools, businesses, shops, and most shopping centers as well as libraries and small museums to reopen since May 11.

The decision also reprimands the French bishops and French bishops’ conference, who deliberately refrained from attacking the May 11 decree in the courts. Instead, on May 1, when Prime Minister Philippe, detailing how deconfinement would be organized, offhandedly announced that there would be “no Mass before June 2,” the bishops’ conference’s president, Eric de Moulins-Beaufort, simply remarked: “You can find this decision exaggeratedly cautious, but it still needs to be implemented.”

The May 11 decree went even farther in that it omitted to give a date for the return of public worship.

The Society of St Pius X (FSSPX) also made an emergency recourse, asking in particular for the right to organize outdoor Masses on public or private grounds. The Council of State did not respond definitively to this question.

Lay Catholics were represented by the AGRIF, a French and Christian “anti-defamation league” that, under existing anti-racist laws in France, is fully habilitated to represent the rights of Catholics in the courts. The author of this article had the honor of signing the recourse as one of the AGRIF’s vice presidents, together with Guillaume de Thieulloy, another vice president who runs the French conservative and Catholic news blog “Le Salon beige,” and AGRIF’s president, Bernard Antony, former European M.P. and founder of a Christian cultural center (the Centre Charlier, which launched the now famous Paris-Chartres Pentecost pilgrimage) and of an association that helps persecuted Christians the world over, “Chrétienté-Solidarité.”

The French Christian Democrat political party PCD, as well as a traditionalist group, Civitas, a group of lay Catholics from Metz in the East of France, and Bruno Gollnisch, former European M.P. of the French National Front, also presented separate recourses.

A large number of arguments, varied but often convergent, were presented during the emergency hearing at the Council of State last Friday afternoon.

Any French citizen or group may seize the Council of State in a particular emergency procedure called a “référé-liberté” by which the legality of an executive decision may be challenged.

The applications of the groups and individuals named above were submitted from the 12th to the 14th of May and were given wide publicity. It was immediately made clear by the Council of State that the Friday the 15th hearing would group without merging all the requests concerning Catholics’ demands for the restoration of public worship.

The French bishops could easily have presented their own application at this point, even after having declined invitations to join the procedure in its preparatory stages before the May 11 decree. They did not, despite the strength of the arguments against the continued “confinement” of public Masses.

In an interview with the unofficial daily of the French bishops, La Croix, the spokesman and secretary-general of the bishops’ conference, Fr. Thierry Magnin, reacted “soberly,” writes journalist Arnaud Bevilacqua. It would be more appropriate to call his reaction “aloof.”

We have duly taken note of this order and we think it is fair. In fact, it is in line with a letter that the president of the CEF, Bishop Éric de Moulins-Beaufort, sent to the Prime Minister on Friday, May 15. We did not refer the matter to the Council of State, but we wanted to make our position clear. The Council of State fully supports this position. It says that the government has gone too far with the ban. Our position has never been to enter into a wrestling match with the government. That is the whole point of the letter from Bishop de Moulins-Beaufort. It is not a matter of crowing over the decision, even though we obviously think it is a step in the right direction. We have always been in direct contact with the government. Today, Monday, May 18, I myself have again sent more detailed proposals to regulate the resumption of worship.

In particular, it is being suggested that churches should be allowed to organize celebrations with a third of their potential congregation. But to date, these “behind-the-scenes” negotiations have had zero success.

Magnin went on to say:

We will continue to work intelligently together. Bishop de Moulins-Beaufort’s letter to the Prime Minister was clear and in the relationship we are trying to maintain we can tell each other things in confidence. I do not believe that the government had the will to minimize freedom of religion. The associations that brought the matter before the Council of State made this appeal and we did otherwise by writing to the Prime Minister because we are in dialogue and there was the prospect of another meeting with the president on May 25 in the company of the other religious denominations. These associations have done what they saw fit, and there are several ways of doing so. We did not consider filing an appeal with the Council of State, but Bishop de Moulins-Beaufort pointed out that there was a legal problem, which was finally raised by the Council of State.

It would seem that the leaders of the French bishops are somewhat uncomfortable with the procedure that short-circuited their inter-religious and fruitless talks with the authorities.

This attitude on the part of the central French Catholic hierarchy would explain why individual bishops, a number of whom have openly decried the prohibition of public worship, decided not to join the procedure.

Bishop Marc Aillet of Bayonne tweeted: “I welcome the decision of the Council of State ordering the French government to lift the general ban on gatherings in places of worship. Thank you to all those who initiated this and thanks to the Lord who inspired this just struggle.”

Bishop Bernard Ginoux of Montauban, who recently called the prohibition of public Masses “unjust and totally absurd,” adding that “we cannot be subjected to an order that is contrary to common sense,” was also satisfied by the decision: “My thanks to justice which has acknowledged a ‘grave and a legal violation of the freedom of worship.’”

Both the traditional priestly institutes and fraternities and the AGRIF quoted from the Catechism of the Catholic Church in order to underscore why Catholics have an urgent spiritual need of Mass, at which they should assist in person, because during Mass, the sacrifice of the Cross is renewed, where they can receive the body and blood, soul and divinity of Jesus Christ in Communion as a necessary spiritual  nourishment.

This may seem a strange argument in front of administrative judges who monitor the activity of the public authorities of a secular and even secularist Republic such as France. But Jérôme Triomphe, who was one of the lawyers of the priestly institutes, told LifeSite that it was necessary to explain Catholics’ specific needs in order to prove to the Council of State that not only had a fundamental liberty such as freedom of worship been restricted — and this can be allowed for proportionate reasons in the face of sanitary emergency — but that there was an “urgent” reason for putting a stop to the restriction.

Interestingly, the judges of the Council of State focused on religious freedom and freedom of worship of believers in order to say that “the absolute and general prohibition” decreed on May 11 (apart from funerals, which have been possible since the beginning of confinement) was illegal because less stringent measures could be applied while preserving public health.

They rejected the government representative’s arguments regarding a number of other public venues, such as sports centers, dance halls, and restaurants which may not receive the public until further notice, not only because of the activities involved, but because freedom of religious worship is “essential” and protected by international treaties, the French constitution, and laws in a way that those activities are not.

The judges did take into account the fact that gatherings of up to 10 people are now allowed in other public venues.

In a statement to LifeSite, Jérôme Triomphe said: “This victory is a very important decision of general principle regarding the fundamental rights of worship, of which the French government had thought that it was not essential to the rights of believers. It is just as essential for a Catholic to receive spiritual nourishment, in particular through sacramental Communion, as to take physical nourishment, because man does not live by bread alone, but by every word that comes from the mouth of God.”