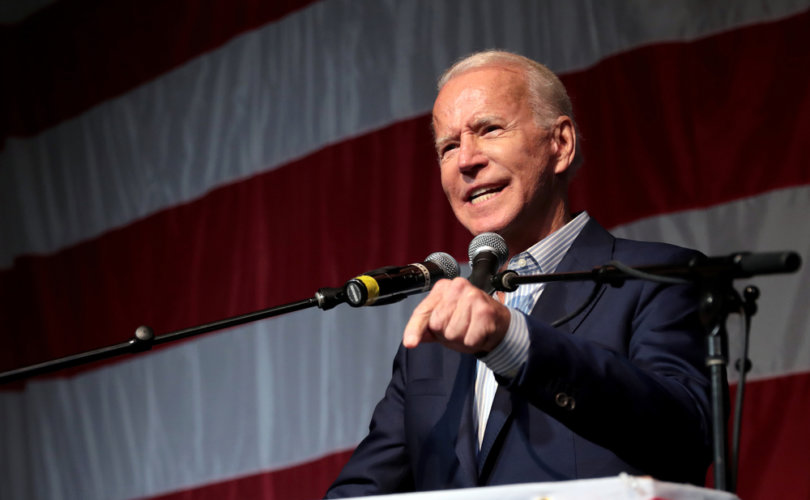 TEXAS, AMERICA - MARCH 02, 2020: Candidate for President Joe Biden in the middle of the election for America, always attended the general meeting at Gilley's Dallas.NumenaStudios / Shutterstock.com

November 27, 2020 (LifeSiteNews) – The Human Rights Campaign (HRC), America’s largest and most powerful LGBT lobby organizations, is pushing Joe Biden and Kamala Harris to target Christian educational institutions, demanding that a Biden Administration strip colleges that adhere to rules and positions opposing homosexuality of their accreditation. The HRC’s “Blueprint for Positive Change,” which offers 85 recommendations, proposes eliminating non-discrimination exemptions for religious colleges if they refuse to abandon the biblical position on marriage.

Al Mohler, a theologian and president of the Southern Baptist Theological Seminary, sounded the alarm on the HRC’s push in an essay titled “A Direct Threat to Christian Education.” The laundry list demanded by the HRC, he notes, are fundamentally transformational. The HRC is demanding that the State Department “include a non-binary gender marker” on identification such as passports and form a panel to explore how the LGBT agenda can be classified as “inalienable rights” and how this agenda can be pushed in international relations.

But the most dangerous proposal is aimed at essentially destroying Christian institutions overnight. As Mohler put it:

In terms of accreditation, that is an atomic bomb.

In clear text, for all the world to see, the Human Rights Campaign summons the Biden administration to deny accreditation—or, at the very least, to facilitate the denial of accreditation—to Christian institutions, Christian colleges and universities, and, for that matter, any other religious institution or school that does not meet the demands of the LGBTQ orthodoxy. This would mean abandoning biblical standards for teaching, hiring, admissions, housing, and student life. It would mean that Christian schools are no longer Christian.

This is insidious from top to bottom. Schools that will not get in line with the moral revolution, if the Biden Administration acts as demanded, will be denied their accreditation. We must not miss the language: Accreditation should be revoked for those who do not meet the LGBT “non-discrimination” standards or “science-based curricula standards.”

Wait just a minute. The Human Rights Campaign is not known for any particular agenda on the creation-evolution front, nor is the group preoccupied with particle physics. The Human Rights Campaign is targeting issues of sexual orientation and gender identity, cloaking them in the language of “science.” This is an undisguised effort to require Christian schools and colleges to abandon biblical authority or lose accreditation.

This is an open threat to the ability of Christian colleges and schools to operate by Christian conviction. This is an outright attempt to eliminate religious freedom for Christian schools—or for any religious school that refuses to bow to the moral revolutionaries at the Human Rights Campaign.

Mohler further noted that this is “an undisguised attempt to shut down any semblance of a Christian college or university that would possess the audacity to operate from a Christian worldview.” As I’ve noted before in this space, the LGBT lobby has been open about the fact that when they achieve power, their goal is to “punish the wicked”—their words, not mine. The Human Rights Campaign and other LGBT organizations, infuriated by the four-year pause in the rainbow blitzkrieg transforming American institutions, is going to come after Christians with a vengeance.

Joe Biden, it must be noted, is as radical as the HRC is on these issues. He openly promised every LGBT leader who would listen that he would be their man in the White House, and for LGBT activists, this means going after their enemies. Their enemies, as the HRC has made clear once again, are those who refuse to join the Pride Parade and stubbornly cling to beliefs and traditions that have lasted for thousands of years rather than joining them on the “right side of history” (which is roughly less than two decades.) They have been meticulously researching methods of toppling Christian institutions. Their “Blueprint for Positive Change” is just a start.