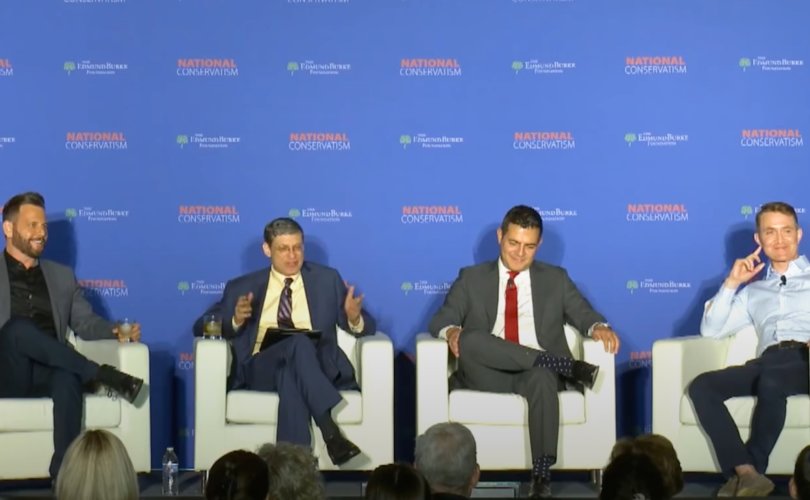 This is the third in an ongoing series on the problematic rise of LGBT influence in conservative and GOP circles. The first two commentaries can be found here and here.

Editor’s note: The article has been updated with comments from Yoram Hazony.

(LifeSiteNews) — It was a stunning spectacle: A panel discussion at the National Conservatism Conference earlier this month showcased the degree to which top conservative thinkers have capitulated through self-imposed silence regarding homosexuality and same-sex “marriage.”

Gays seem to have conquered the nascent National Conservatism movement without a battle, at least not a public one. And yet optics are everything.

In what was meant to be a highlight of the three-day gathering in Orlando, Florida, Yoram Hazony, Chairman of the Edmund Burke Foundation and responsible for the national conservatism movement, and Sohrab Ahmari, contributing editor of The American Conservative and a visiting fellow of the Veritas Center for Ethics in Public Life at Franciscan University of Steubenville, were joined on stage by two prominent homosexuals, Dave Rubin, host of The Rubin Report, and Douglas Murray, author of The Madness of Crowds: Gender, Race and Identity.

As the panelists sought to answer the question, “Is liberalism by itself — the idea of ‘life, liberty, and property’ — sustainable?” they had no trouble criticizing transgenderism, but homosexuality and same-sex “marriage” were clearly off the table. Off-limits. Verboten.

“Freedom without limits,” answered devout Catholic Ahmari, without “an account of what it means to be happy and what freedom is really for — and there are true or false, better or worse answers for that — actually leads to unfreedom.”

Ahmari illustrated his point by zeroing in on transgenderism and how the personal autonomy asserted by transsexuals freeing them to choose their preferred genders requires that others play along.

“So now we’re all forced to mouth absurdities that aren’t true,” said Ahmari, who by choosing to remain silent about the homosexual “marriage” of fellow panelist Dave Rubin lent his tacit approval to an equally absurd act.

Ahmari’s silence is no different from the forced vocal acknowledgement of a male as female or a female as male. Not long ago, the absurdity of same-sex “marriage” and transgender lives were of equal weight. But no longer, at least not among members of this panel.

Ahmari showed himself to be a victim of the “unfreedom” he was trying to warn against.

A failure of guts

And then Murray made a remarkable statement which, whether intended or not, served as an indictment of Ahmari’s silence:

“When the gay rights movement succeeded in its quest in countries like [the U.S.], it did so by saying ‘gay people exist and you’ve got to accept it,’” continued Murray. “It did not say, ‘and therefore men and women do not exist.’”

“The problem with the trans movement is that it says, ‘I’m here, I’m trans, and therefore you’ve got to change your language and change your understanding of biology,’ and the answer to that is ‘No,’” said Murray, paraphrasing the gay mantra shouted in the streets ad nauseam in the 1990s, “We’re here. We’re queer. Get used to it!”

Contrary to Murray’s assertion, the gay movement has made similar unreasonable demands which have had a huge impact on western culture.

Gays and lesbians demanded that the definition of marriage be mutated to incorporate genderless relationships. What Murray refers to as the gay rights movement having “succeeded” was a violent act destroying the immutable truth of complementarity. The word “marriage” has been degraded by gays every bit as much as the words “male and female, boy and girl” have been by the trans movement.

“I have come to believe,” began Dave Rubin, a recent convert to conservative thinking, that for things “that were born out of classical liberalism, there is an uncomfortable ending to it.”

“This is the missing piece for many of my liberal friends right now: You’re not connecting your ideas to something eternal, something that is just bigger than us whether you like it or not.”

And yet Rubin fails to recognize he is failing to apply his newly attained wisdom to himself. He too is missing a big piece when it comes to self-awareness about his homosexuality.

To his credit, Rubin later brought up what neither the devout Catholic nor the Orthodox Jew were brave enough to: “There is a bit of an elephant in the room which is that two of the panelists here are gay.”

I hesitate to bring it up because I don’t want to make it personal, but this is sort of floating here now, so let’s do this. [If the norms we are discussing are purely biblical norms] there’s going to be some infringement on my ability to live a functioning life. I’ve been “married” for eleven years, I’m in a faithful relationship, we’re working on having kids … but depending on where you guys want to draw those lines, we might have an issue.

But no discussion on limiting homosexuality or restoring the immutable definition of marriage ensued.

Why wasn’t Rubin’s statement challenged? His statement passed quietly into the ether but should’ve evoked gasps of horror.

The morality of parenthood that Rubin subscribes to is exactly the same as homosexual Secretary of Transportation Pete Buttigieg’s and all the other wealthy white gays who can afford the vast sums of money necessary to have children medically engineered for them.

There is indeed an uncomfortable — motherless — ending to homosexuality and same-sex “marriage,” especially for the children Rubin and his “husband” hope to obtain.

What about the mother-deprivation the two men will etch on their future children, children which, if they choose surrogacy, they will produce by contract, by purchasing eggs, renting a womb, and then erasing — eradicating — those women from their children’s lives? The same is true for lesbian couples who bring children into the world who will suffer from fatherlessness.

There is indeed “something that is just bigger than us,” whether Rubin “likes it or not”: Nature and science, both of which have recognized the supreme significance of complementarity throughout human existence.

Rubin is currently incapable or unwilling to apply his own wise words to his own life.

During the Q&A session that followed the panel discussion, Rabbi Yehoshua Pfeffer aimed a profound question at Hazony and Ahmari:

Douglas [Murray] mentioned the distinction between gay “marriage” on the one hand and the trans issue on the other, meaning, ‘We don’t want to be educated in terms of language, boys and girls and so on, but it’s ok to be educated in terms of what we define as marriage, marriage being not just man and woman, but marriage is rather any two people … and the question is, where do you draw the line? Meaning, it’s okay to redefine marriage but it’s not okay to redefine sex and gender?

“We’re speaking about the soul of America, the soul of humanity, of what it means to be a citizen of the United States,” he added.

Stunningly, both Hazony and Ahmari passed on answering Rabbi Peffer’s question making it clear that neither is willing to draw a line against homosexuality and same-sex “marriage.”

And these men are purportedly on a mission — seeking to lead a counterrevolution — to save conservatism, thereby saving the United States of America?

Ahmari did not respond to LifeSiteNews’ request for comment.

As I said during my opening remarks at the beginning of this panel, there are many issues that profoundly divide the four of us. Our goal in organizing this panel was not to elaborate on these deep divisions and spell them out. That might have made for an interesting debate, but it is not what we chose to do that evening. Instead, our goal was different: It was to seek a framework that might allow anti-Marxist liberals to support a platform that would get past 1960s fusionism and permit a return of public religion in areas where there is religious majority.

This is in fact what happened during the panel. We discussed a possible framework for working together, which would: (1) Allow religion to determine public life in places where there is a Christian majority, (2) but with “carve-outs” for dissenting minorities. We didn’t try to to discuss all the contentious issues that would come up under such a framework. We discussed a framework that would allow these contentious issues to be discussed productively and resolved in many situations. I think we made real headway on that, but we obviously still have a long way to go in future discussions.

Conservative elites will fail in their quest to enliven conservatism if they fail to conserve marriage, the nuclear family, and our commitment to every child’s right to his or her mother and father.

Whether members of the political, academic, media, or corporate classes, conservative elites, need to once again relentlessly pursue intellectual honesty and integrity regarding creeping LGBT influence within their ranks.