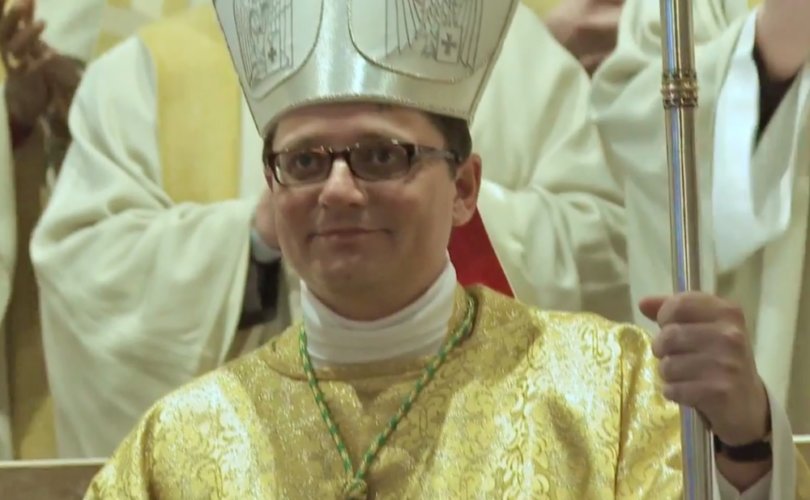 January 21, 2019 (LifeSiteNews) – A Swiss bishop who heads the country’s Bishops' Conference has become the center of controversy after he gave permission for a pastor who had been previously convicted of child sexual abuse to be placed in a parish.

Felix Gmür, bishop of Basel since 2011, had given a certain Father Stefan K. the permission to be elected by a parish council. In the preparatory discussions, it was claimed by representatives of the Church that this priest had merely massaged the feet of a 16-year-old boy.

As journalists discovered, however, the convicted priest had done more than that.

The scandal comes just weeks before the Abuse Summit is to take place in Rome, where presidents of the world’s nearly 130 bishops’ conferences will gather with Pope Francis to discuss clerical sex abuse.

On January 16, the national Swiss Broadcast Channel SRF aired a program concerning a parish in Riehen, in Canton Basel, Switzerland and its ongoing conflict over a proposed election of a new parish priest, Father Stefan K.

The reason for the current conflict is that this priest had been convicted, in 2012, of having sexually abused several adolescent boys in the Canton of Thurgau. Over the course of 11 years – from 1999 until 2010 – he is said to have massaged the feet of several boys and, in one case, went even further, and he was placed in pretrial detention, in 2010, for over a month because of that charge. Later, the priest was sentenced to pay a further fee of 4,000 Swiss Franks (4,000 U.S. Dollars).

What the parish of St. Franziskus in Riehen did not know, however, was that he had been sentenced for having gone with his hands under a boy's shirt, stroking him and giving him a kiss on his neck. This incident happened when the two were together in private watching a DVD and after he had first massaged the boy's feet.

The parish in Riehen had welcomed Father K. as an assistant priest in 2017 and decided – due to his popularity and also to the shortage of priests – to elect him as the parish priest. Bishop Gmür approved of it. The election would have taken place on 10 February.

It was then that a member of the parish, Bernhard Hegner, started to oppose the election of Father K, saying that he did not see any sense of remorse in this man. Father K. had accepted his earlier sentence, but later said that he wanted to avoid further public scandal. The priest now maintains that he had merely massaged the feet of the boys (Father K. is said to be a professional masseur). He claimed that his deeds had been “foolish,” but that they were only about massaging feet.

“A foot is not a sex object,” was then the argument of Stefan Suter, the head of the electoral commission of St. Franziskus, during a 10 January public hearing in the parish of Riehen, before it came out more fully that the sentence papers of conviction spoke about more than feet. At that public hearing, Father K. declined to provide the content of his sentence when asked by several people of the parish to do so.

At the time of Father K.'s imprisonment, his bishop – then Kurt Koch – immediately removed him from his position. The parish in Riehen was not even given the full content of the earlier accusations that had been made against this priest.

Speaker of the Diocese of Basel, Hansruedi Huber, has distanced himself from his bishop, saying that he counseled him not to give Father K. a new position in that Basel parish. To tolerate such a man in a parish position, Huber told his bishop, is “a No-Go with regard to the public image.” “It would have been easier to keep away from this matter,” he explained.

It was through the media that the content of the 2012 legal sentence was leaked. When parishioner Bernhard Hegner – himself a retired psychiatrist – read the content of that document, he shook his head and said: “That does not work. This has nothing to do anymore with being a priest.” As one Catholic man from Switzerland commented to LifeSiteNews: “The bishop and the diocesan leadership did not inform the parish!”

Bishop Gmür, on the other hand, refers to assessments made by psychiatrists, who claim that Father K. has no pedophile tendencies and that there is no danger in placing him in a parish. The bishop also points out that he could not speak about private matters in public. Every person has a right to a second chance, he said, according to the national newspaper Neue Zürcher Zeitung. It was agreed, however, that Father K. was not going to be involved in any youth ministry. How this could feasibly work for a pastor is yet another question.

Bishop Gmür had decided to let the parishioners have the last word in their own election of a pastor. However, as several commentators are now pointing out, how can parishioners properly vote on something they do not have full knowledge of?

As one report shows, as soon as the content of the legal document concerning Father K.'s sentence was leaked, things started to change. As of 15 January, Father K. withdrew his own candidacy for the position of parish priest in the St. Franziskus Parish in Riehen. Stefan Suter referred to the psychological pressure placed upon Father K. and claimed that there existed in Riehen “in part a rigorism where humanity and mercy are being put aside.”

This case raises many questions, especially in light of the recent McCarrick scandal in the U.S. First, this scandal is a sign that the Church's leadership still lacks a sensitivity toward the victims of clerical sex abuse and the need of a “zero tolerance” policy. It also raises the question why such a convicted priest could even be re-hired by a diocese in the first place.

As one Catholic commentator said to LifeSiteNews on condition of anonymity: “Bishop Gmür clearly has taken here a zigzag course and has lost his credibility. That a priest would even massage the feet of a youth is absolutely unacceptable.”

Bishop Gmür himself is known for his rather progressivist and lax views. In 2013, he gave an interview with the Aargauer Zeitung in which he stated that he could imagine “a woman standing at the altar,” and in which interview he also showed himself supportive of the idea to abolish priestly celibacy. Gmür has been the President of the Swiss Bishops' Conference since the beginning of 2019.