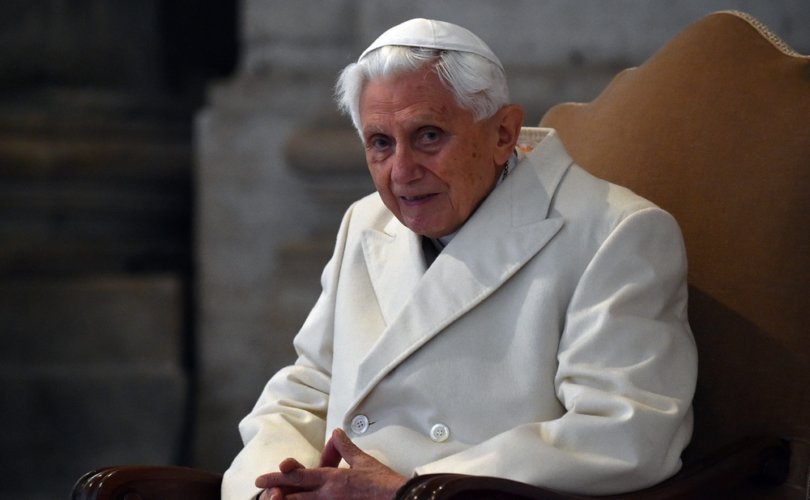 April 10, 2019 (LifeSiteNews) – A lengthy letter said to have been penned by Pope Emeritus Benedict XVI addresses the abuse crisis tracing its origin to the sexual revolution and the subsequent revolution in the clergy.

It gives as a solution to the crisis a return to a demonstrative belief in God and also a return to respect for the Holy Eucharist.

The letter, first published by EWTN, gives little indication of its authenticity, nor even a date. However, LifeSiteNews received information that a major document would be released tomorrow in Rome and thus provides this summary of the main points of the document.

Tracing the sexual revolution in Germany and Austria via an account of state-sponsored sex-ed films for children and youth showing sexual intercourse, Pope Benedict’s letter then notes the betrayal of theologians regarding the rejection of the concept of intrinsic evil – the concept that there are “actions which were always and under all circumstances to be classified as evil.”

Benedict recalls how Pope St. John Paul II’s encyclical Veritatis Splendor was denounced by the leading German theologian because of its inclusion of intrinsic evil.

Explaining the concept in defense of Pope John Paul, Benedict writes: “[John Paul] knew that he must leave no doubt about the fact that the moral calculus involved in balancing goods must respect a final limit. There are goods that are never subject to trade-offs. There are values which must never be abandoned for a greater value and even surpass the preservation of physical life. There is martyrdom. God is (about) more than mere physical survival. A life that would be bought by the denial of God, a life that is based on a final lie, is a non-life.”

Turning to the moral corruption of the clergy, Benedict writes that during the 1960s, “In various seminaries homosexual cliques were established, which acted more or less openly and significantly changed the climate in the seminaries.” He notes that when the Vatican tried to investigate such things they were blocked.

From a seemingly detached position, Benedict notes that the “criteria for the selection and appointment of bishops had also been changed after the Second Vatican Council… Above all, a criterion for the appointment of new bishops was now their ‘conciliarity.’” He adds: “Indeed, in many parts of the Church, conciliar attitudes were understood to mean having a critical or negative attitude towards the hitherto existing tradition, which was now to be replaced by a new, radically open relationship with the world.”

Giving an example, the Pope Emeritus relates, “One bishop (whom he does not name), who had previously been seminary rector, had arranged for the seminarians to be shown pornographic films, allegedly with the intention of thus making them resistant to behavior contrary to the faith.”

Summarizing in one paragraph the severity of the problem Benedict writes:

There were — not only in the United States of America — individual bishops who rejected the Catholic tradition as a whole and sought to bring about a kind of new, modern “Catholicity” in their dioceses. Perhaps it is worth mentioning that in not a few seminaries, students caught reading my books were considered unsuitable for the priesthood. My books were hidden away, like bad literature, and only read under the desk.

The Pope Emeritus recalls the words of Jesus: “Whoever causes one of these little ones who believe in me to sin, it would be better for him if a great millstone were hung round his neck and he were thrown into the sea” (Mark 9:42) relating them to an abuse of the faith. “The phrase ‘the little ones’ in the language of Jesus means the common believers who can be confounded in their faith by the intellectual arrogance of those who think they are clever. So here Jesus protects the deposit of the faith with an emphatic threat of punishment to those who do it harm,” explains Benedict.

Key quotes on the solution to the crisis

Pope Benedict ties the crisis to disrespect for Jesus in the Holy Eucharist. The Pope Emeritus speak of “how little we Christians of today still know about appreciating the greatness of the gift that consists in His Real Presence,” noting that the “Eucharist is devalued into a mere ceremonial gesture when it is taken for granted that courtesy requires Him to be offered at family celebrations or on occasions such as weddings and funerals to all those invited for family reasons.”

“What is required first and foremost,” says Pope Benedict “is the renewal of the Faith in the Reality of Jesus Christ given to us in the Blessed Sacrament.” He adds, “we must do all we can to protect the gift of the Holy Eucharist from abuse.”

Benedict XVI concludes warning against the temptation of the devil to see the Church as “entirely bad” and thus creating a new “better Church” of our own making.

“The idea of a better Church, created by ourselves, is in fact a proposal of the devil, with which he wants to lead us away from the living God, through a deceitful logic by which we are too easily duped,” he writes. Benedict says that even though there are bad fish and weeds in the Church, the “Church of God also exists today, and today it is the very instrument through which God saves us.”

“It is very important to oppose the lies and half-truths of the devil with the whole truth: Yes, there is sin in the Church and evil,” Benedict concludes. “But even today there is the Holy Church, which is indestructible.”

Despite the fact that many passages in the letter could be read as a criticism of Pope Francis, particularly the section around devaluing the Eucharist by allowing its indiscriminate reception, Benedict ends his letter with this praise for Pope Francis.

“At the end of my reflections I would like to thank Pope Francis for everything he does to show us, again and again, the light of God, which has not disappeared, even today. Thank you, Holy Father!”