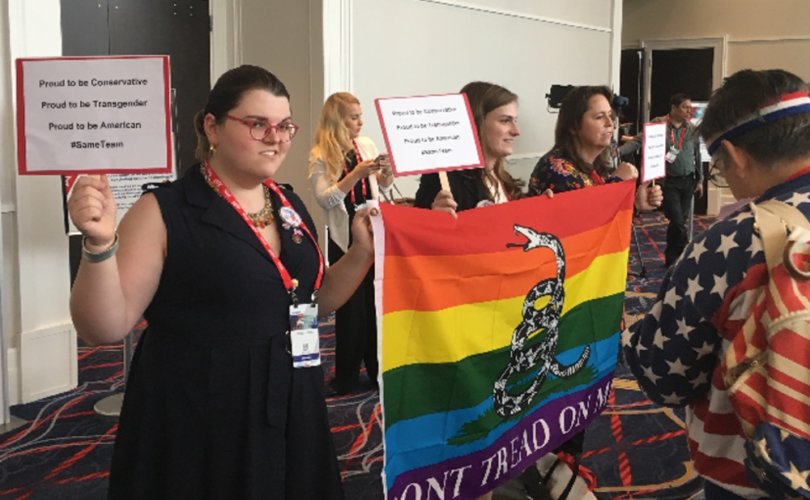 LGBT activists at the 2018 CPAC conference in National Harbor, Maryland.

February 22, 2018 (LifeSiteNews) – I attended my first Conservative Political Action Conference (CPAC) nearly a decade ago, while still living as a gay man.

I had recently undergone a ‘political awakening’ and, as a participant in the Tea Party movement from its inception, had recently co-founded National Capital Tea Party Patriots in Washington, DC.

At the time, I was dating a guy whose cousin was one of the Republican Party’s famous three “Young Guns” — Eric Cantor, Kevin McCarthy and Paul Ryan — who were rising in leadership in the U.S. House of Representatives. I felt like that added to my conservative bona fides.

Soon after walking through the door to CPAC at DC’s venerable Wardman Park Hotel, something unexpected happened:  My ‘gadar’ — that mysterious internal instrument that informs gay guys that they are in the presence of other gays — began buzzing off the charts.  The needle shot to the upper reaches of the red zone and remained there.

I was again pleasantly surprised when, as I began leafing through the CPAC program, I discovered that a gay group that called itself, GOProud, had a booth alongside all the other old guard conservative exhibitors.

Interestingly, while making my way past all the other exhibitor’s tables in order to get to GOProud’s booth, I spotted a very nice looking young man dressed in a Navy pea coat and sporting a great Kennedy-esque head of hair, standing alone near the GOProud booth.  I thought for a minute that I might like to meet him.

As I drew closer, I was overcome with horror. What I had thought was a handsome guy turned out to be MSNBC’s Rachel Maddow, no doubt doing undercover reconnaissance work for her show.

I would like to use my embarrassing Maddow mistake as a metaphor for what I believe is the current state of CPAC, namely that things at CPAC are not what they seem. While at a distance it might seem that CPAC is a solidly conservative enterprise, a close-up view reveals something entirely different.

Last week I reported that CPAC had abruptly rescinded its acceptance of the pro-family group MassResistance as an exhibitor at its annual national meeting while permitting the pro-LGBT group, Log Cabin Republicans, to remain.

MassResistance’s founder, Brian Camenker, suggested that CPAC continuing to define itself as conservative is “deceiving.”

“Similar to the direction of the GOP establishment, in recent years CPAC has become more libertarian-oriented and pro-LGBT – and hardly any pro-family groups have had exhibits or been sponsors. This seems to mesh with the attendees: approximately half are 18-24, and clearly products of modern culture,” he said.

Camenker is right.  The trading of conservative values for values-free libertarianism should come as a surprise to no one.  CPAC set itself on this trajectory years ago.

At my very first CPAC gathering, I quickly came to understand that CPAC was not so much a conservative group as a libertarian one when I noticed that year after year, Ron Paul won CPAC’s presidential straw poll.  And it was no wonder he won: The Paul Campaign always made sure that CPAC was flooded with college-aged attendees who are prone to libertarianism.

At that age, the assertion of individual rights and individualism in their most extreme forms is paramount, allowing one to appear to be free from rampant progressivism. At first blush, this sort of stance seems very ‘adult’ and countercultural in the midst of college campuses where political correctness has long enjoyed an almost tyrannical presence.  In reality, the embrace of libertarianism serves just two purposes:  1] The freedom to be selfish, and 2] License to participate in the ongoing sexual revolution, free from guilt.

While I was glad to see so many young people at my first CPAC, I hadn’t yet realized that they would, over a short period of time, be a force for ripping the CPAC from its conservative moorings.

Appearing on Fox News this week, CPAC president Matt Schlapp spoke about “the kids” whose presence dominates the annual event.  “At CPAC, 50% of the crowd is college-aged or younger.  We’re attracting new people and new voices to the movement.”

But at what cost?  Who is actually teaching, forming, and directing whom?

Focusing on real marriage and family structures — the bedrock of social conservative values — is far less prominent in the CPAC agenda than it once was, while LGBT ideology has established a firm foothold.  CPAC has been co-opted.  It has undergone a quiet hostile takeover.

How libertarianism turned me back to God

Over the course of a year or two, I found myself uncomfortable among libertarians.  That came to a head when CATO Institute President Ed Crane — who had been following my Tea Party commentaries in The Washington Times — invited me to meet with him.

Although at that point I hadn’t been a practicing Christian for many years, I was, for lack of a better descriptive term, ‘creeped out’ as I sat in CATO’s beautiful offices on Massachusetts Avenue in DC. Never before had I sensed the total absence of God in a physical space, but I did that day.  And my experience there was the kick in the pants I needed to get me back on the road toward returning to the Catholic Church.  I rejected Libertarianism that day, once and for all.

I also became troubled when I realized that no matter what they said, GOProud and Log Cabin Republicans weren’t actually conservative groups.  If they were, they would’ve taken a firm stand against same-sex “marriage,” as I had.

Instead, as the issue came to the forefront, they supported same-sex “marriage” lobbying efforts in states across the country.

I felt alone as a gay man as I testified before a number of state legislatures against same-sex “marriage.”  I soon realized that I was being drawn to testify not just with my words, but with my actions.

My conscience told me to live a chaste life, to repair my marriage with my wife, and to bring our family back together again.  It took some doing, but it happened in 2012.  And I returned to full communion with the Catholic Church in May 2013.

I have become a marriage and children’s rights activist since then.  So it saddens me that CPAC which once proudly displayed red, white, & blue, now displays garish rainbow colors in equal portion.

While I felt at home at CPAC while gay, I think I would feel like a stranger there today.