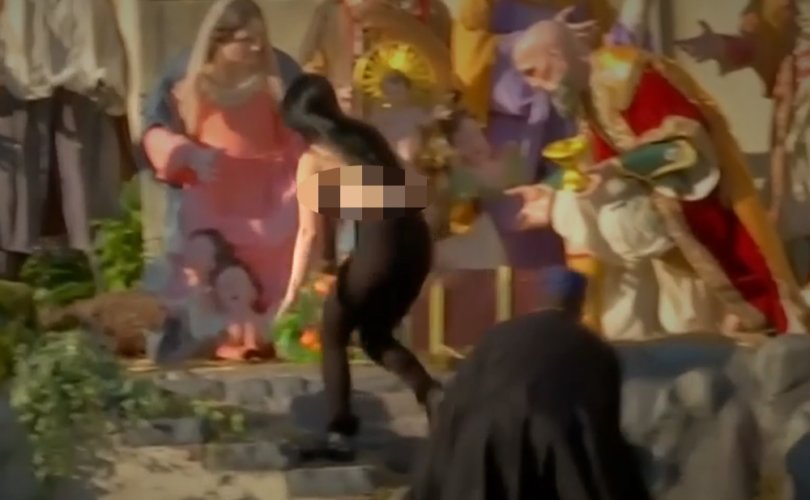 VATICAN CITY, January 2, 2018 (LifeSiteNews) – A topless woman attempted to snatch a wooden doll depicting the Infant Christ from the nativity scene, or presepio, in St. Peter’s Square on Christmas Day.

Alisa Vinogradova was caught on video rushing towards the presepio in Vatican Square, about two hours before Pope Francis was due to give his Christmas message. She managed to take hold of the doll before she was wrestled to the ground by police. In the skirmish, the doll lost its halo, and the bare-breasted woman fell among some unusually busty cherubs.  The cherubs, who already had curious expressions, looked positively horrified.

The young woman was recorded shrieking “God is a woman” in heavily-accented English. The same words were painted on her naked back.

An extreme feminist group called FEMEN, founded in Ukraine, claimed responsibility for the action. The goal of the group is apparently “complete victory over patriarchy.” It identified Vinogradova as a “sextremist.”

Another FEMEN activist attacked the St. Peter’s Square nativity scene in 2014. Iana Aleksandrovna Azhdanova, also from Ukraine, was rather more successful in scooping up Baby Jesus before being apprehended. Azhdanova had “God is a woman” painted on her naked torso instead of her back, but it was basically the same story.

FEMEN stated on its website that Vinogradova’s act was “directed against the Vatican’s infringement of the rights of women to their own bodies. In particular, against the policy of the ‘Holy See’ associated with the promotion of the ban on abortion and ‘sacred condemnation’ of contraception.”

Rather oddly, it also stated that “FEMEN considers the anti-war policy of the Vatican a rough medieval attack on the freedom of women and their natural rights.”

It encouraged women to follow its example and “kidnap babies from religious denominations, thus, stating their right to use of their own body!”

FEMEN falsely claimed that Vinogradova had successfully kidnapped the model of the infant Christ.

Consisting of women who strip off before shouting, splashing bishops with water, barging into mosques, and committing relatively minor (if deeply annoying) acts of vandalism, FEMEN is rather pathetic. It’s hard to stay mad at young women who think their toplessness is a weapon that hurts others more than themselves.  It is particularly sad considering how many young women in Eastern Europe, including Ukraine, are coerced into the sex trade.

FEMEN has had its share of coercion, too. In 2013 the supposedly feminist-extremist FEMEN was revealed to be controlled a man named Viktor Svyatski. A filmmaker named Kitty Green, who became very close to the group while filming a documentary, told the Independent that Svyatski “hand-picked” the pretty girls who interrupt gatherings with their bare-breasted protests.

FEMEN leader Inna Shevchenko claimed that the group had expelled Svyatski soon after Green finished her documentary. But the story tainted the feminist credentials of FEMEN ever after. Apparently the group was even funded once by a Turkish salesman selling Chinese lingerie. The pretty young women rushed out into the streets to “protest” clad in his stock. How sad is that?

FEMEN picks only very young, pretty and slim women for its operations, perhaps thinking that these are the women with the most power over men. If they studied traditional societies with any attention whatsoever, they would realize that old-fashioned mothers, sisters, wives and daughters, women who both demand and follow a strict moral code, have the strength to muster armies. Half-naked women are merely momentary distractions, and the shock of seeing bare breasts eventually wears off. So does the shock of manger-robbing.  FEMEN trying to run off with a model of the Infant Christ from the St. Peter’s Square presepio was shocking the first time; the second time it was merely pathetic.

It was particularly pathetic considering how awful the presepio was this year. Poor half-naked Alisa Vinogradova wasn’t half as offensive to faithful Catholics as was the fully naked muscleman to her right.  He, along with the busty cherubs (take a good look), was the real Christmas scandal.

Perhaps it’s a reminder that enemies outside the Church are nothing compared to enemies within the Church. I wish Ms Vinogradova all the best in the New Year: a nice warm coat, for example, and the collected works of Saint Edith Stein on the dignity of women.