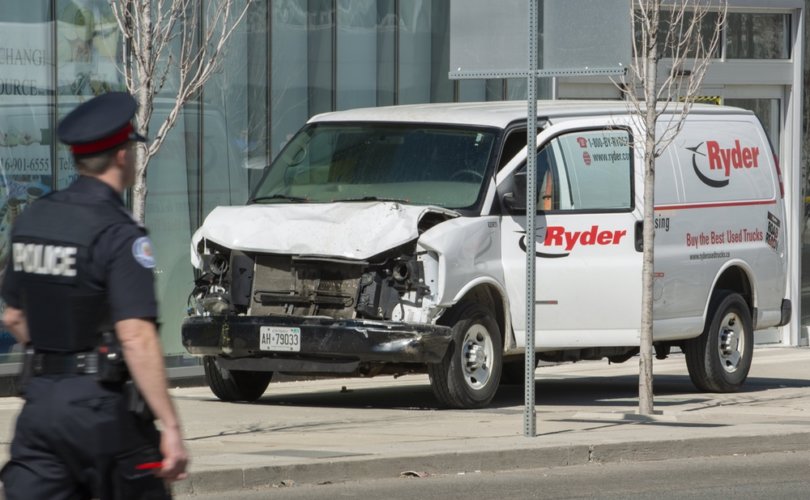 The rented van used in the April 23, 2018 attack in Toronto. Warren Toda/EFE/EPA

May 4, 2018 (LifeSiteNews) – On May 23, 2014, a twenty-two year old man named Elliot Rodger left his California home and murdered six people, stabbing three and shooting three others. He wounded an additional fourteen people. He then uploaded a video to YouTube describing the reasons behind his “Day of Retribution,” emailed a document titled “My Twisted World: The Story of Elliot Rodger,” and then shot himself in his car.

Last week, a twenty-five-year-old man named Alek Minassian drove a rented van down a busy sidewalk in Toronto, killing ten people and wounding another fifteen. The motivation for this attack has not yet been confirmed—those who knew Minassian or had any interactions with him describe someone who seemed to have profound mental issues—but one clue is a post he uploaded to Facebook just before the attack, which reads in part: “The Incel Rebellion has already begun! We will overthrow all the Chads and Stacys! All hail the Supreme Gentleman Elliot Rodger!” Facebook Canada has confirmed that the post is genuine.

The “incel” movement—the term stands for “involuntary celibates”—is an online community of angry young men who see much of society as complicit in a grand conspiracy to deny them the physical affections of women. “Chads” refers to men who do receive female attention, and “Stacys” refers to women who reject “incels” but seem perfectly happy to grant their affections to other men. There does not appear to be any coherent logic to this framework—after all, if an “incel” successfully managed to attract the attention of a woman, he would presumably become a “Chad.”

This community has significant overlap with the alt-right, although misogyny is the chosen primary poison for “incels,” who celebrate the mass murderer Elliot Rodger as a hero for bringing attention to their cause—and there has already been some incel forums buzzing with praise for Minassian, as well. The men on these forums seem to believe that they are entitled to the bodies of females, and that the lack of physical attention they receive is a profound injustice demanding societal attention—and even retribution. Minassian’s apparent reference to Rodger as the “Supreme Gentleman” comes from Rodger’s “Day of Retribution” video, where he expresses his disgust at the fact that many men seemed successful with women while he, a “supreme gentleman,” languished alone.

When I began to explore the ideology, if one can call it that, of the incel movement, the first thing that struck me was that the ideology held by these men was identical to the ideology taught to them at a very young age by pornography: The idea that men are entitled to female bodies, and that female bodies exist primarily for male pleasure. Dr. Gail Dines, author of Pornland, Dr. Mary Anne Layden, author of “Porn and Violence: A New Look At Research,” and Dr. Robert Jensen among others have all examined the sexual ideology that men learn from compulsive pornography consumption. Jensen describes it this way in his paper “Pornography and Sexual Violence”:

My own studies and reviews of other examinations of content suggest there are a few basic themes in pornography: (1) All women at all times want sex from all men; (2) women enjoy all the sexual acts that men perform or demand, and; (3) any woman who does not at first realize this can be easily turned with a little force, though force is rarely necessary because most of the women in pornography are the imagined “nymphomaniacs” about whom many men fantasize.

As it turned out, pornography played a pivotal role in Elliot Rodger’s development from a privileged young man with moderately wealthy parents to a virulently misogynist serial killer. In his manifesto, he described seeing porn for the first time when he was 11, when a friend sent him pornographic photos. He remembered the moment vividly, because it changed him forever. “When I looked at the pictures, I was shocked beyond words,” he wrote. “I had never seen what beautiful girls looked like naked, and the sight filled me with strong and overwhelming emotions. I was traumatized. My childhood was fading away. Ominous fear swept over me…Indeed, a whole new world had opened up before me, and I had not idea how to prevail in it. I still wanted to live as a child.”

Upon reading his manifesto, criminology professor Nicole Westmarland of Durham University noted that, “If you didn’t have the culture of expectation in the first place, you wouldn’t have the culture of rejection. It’s all bound into the idea that women are sexual objects for men to do with what they want. Most men aren’t thinking like that, but some certainly are.” This is certainly a common idea among incels. One incel site, for example, stipulated that women could not post unless they were posting naked photos of themselves.

Rodger’s experience with porn twisted him beyond recognition. He wrote that he became a compulsive masturbator, searching the internet for photos of beautiful women to use. “I developed a very high sex drive, and it would always remain like this,” he wrote. “This was the start of hell for me. Going through puberty utterly doomed my existence. It condemned me to live a life of suffering and unfulfilled desires. Even at that young age, I felt depressed because I wanted sex, yet I felt unworthy of it. I didn’t think I was ever going to experience sex in reality, and I was right. I never did. I was finally interested in girls, but there was no way I could ever get them. And so my starvation began.”

We do not yet know enough about Alek Minassian to be able to ascertain what influences contributed to his mass murders on a sunny Toronto afternoon, or whether his experience was similar that of his purported hero, Elliot Rodger. What we do know is that an entire generation of young men is growing up consuming pornography at an increasingly young age, and that this material is indoctrinating them into an ugly sexual ideology that teaches them that female bodies exist for their pleasure—and that they have a right to live out their sexual fantasies in real life. As I’ve detailed many times in this space, that ideology is already creating a toxic sexual environment where sexual violence is becoming more common and accepted, especially as repulsive BDSM activists attempt to mainstream the idea that inflicting pain inside a sexual relationship is acceptable. If we want to root out the poison that feeds the incel movement, we should start by having an open and honest cultural conversation about what pornography is doing to young men.