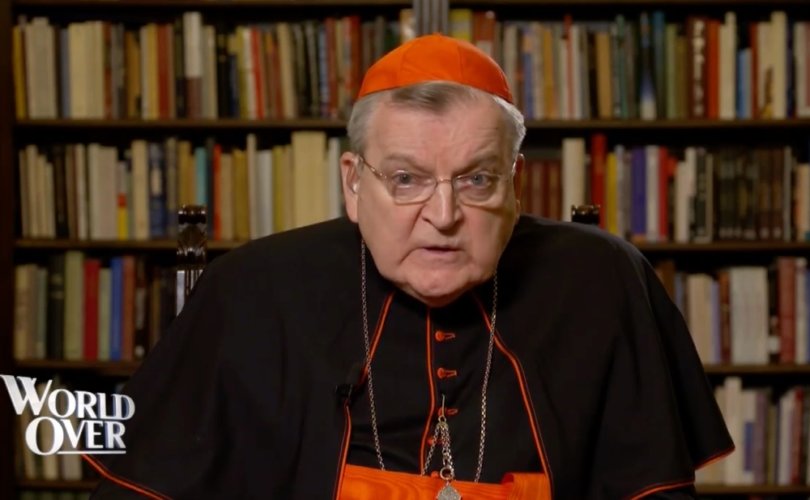 June 3, 2019 (LifeSiteNews) – Cardinal Raymond Burke stated that leaders within the Catholic Church appear to be falling into a “kind of totalitarian mentality” with regard to their treatment of Professor John Rist, one of the original 19 signatories of the Open Letter to Bishops accusing Pope Francis of heresy, who was barred from Pontifical Universities without explanation in the wake of signing the Open Letter.

“We seem in the Church to fall into a kind of totalitarian mentality, where people are simply exercising authority without speaking with the person involved,” Burke said in an interview with EWTN’s Raymond Arroyo on the May 30 World Over show.

Professor Rist learned May 25 that he was barred from entering all Pontifical Universities after attempting to return a car to the Augustinium, one of the Pontifical Universities in Rome where he had been working for the last 16 years. News of Rist signing the Open Letter was published April 30. Rist told LifeSiteNews in a previous interview that he had not received any prior notice about the ban. Nobody had spoken with him.

It was this news that nobody within the Church had communicated to Rist the ban that Cardinal Burke — a canon lawyer and the former head of the Apostolic Signatura, the highest court of the Vatican –  commented on when he spoke about a “totalitarian mentality.” In totalitarian states, it is often the case that the normal procedures of a legal system (to include that the accused person is given a fair hearing) are not applied.

“From what I read,” Burke said, “there has been no public document of the restriction of what it is and what is the reason for the restriction”; he then added that “no one explained to Professor Rist why he was no longer permitted to leave his automobile at the Augustinium and why he was now no longer able to direct a doctoral dissertation. This should be something where he is spoken with.”

The Cardinal defended the reputation of both Professor Rist and his wife Anna as “learned” and generous people.

“Professor Rist and his wife Anna are devout Catholics. They are both very learned people who have placed their considerable learning at the service of the Church,” he said.

“To treat esteemed members of the faithful in this way I think [is] completely unacceptable,” he added.

Cardinal Burke and Professor Rist both contributed, in 2014, to the book Remaining in the Truth of Christ that aimed at convincing the Catholic Church to preserve the Church's teaching on marriage and the family whole and entire during the Synod on the Family and thus not to embrace the so-called “Kasper proposal” to allow some “remarried” divorcees access to Holy Communion.

Several Catholic scholars and journalists have already expressed their indignation over the unjust treatment of Professor Rist, among them being Father Joseph Fessio, Dr. Edward Feser, and Matthew Schmitz.

Speaking with LifeSiteNews, Father Fessio pointed out how leniently dissenters have been treated during the last decades. Rist, on the contrary, “did not deny or reject any Catholic teaching.”

“The present situation is: a professor in a Catholic institution has freedom to reject authoritative Catholic teaching, but not to criticize the pope. Chesterton would call that topsy-turvydom. I would call it something worse.”

Philip Lawler, journalist and book author, commented on the Rist case on Friday. While Lawler does not agree with the arguments of the Open Letter accusing Pope Francis of heresy, yet he still wonders: “But doesn’t academic freedom mean that a scholar should be allowed to profess an unpopular opinion?”

“The crude treatment of John Rist—which the professor rightly described as 'grotesque discourtesy'—highlights a disturbing trend in Rome. Call it the new ultramontanism: the aggressive attitude of the Pope’s overeager defenders, who treat criticism of the Pontiff as a far more serious offense than attacks on the Catholic faith,” Lawler added.

Cardinal Gerhard Müller, former Prefect of the Congregation for the Doctrine of the Faith, said that the Open Letter deserves a “response” from the Vatican, even though he did not agree with the Open Letter and does not believe that the Pope is a heretic. He explained that since the authors of the letter are “renowned theologians,” it would be “important that the Holy Father makes the Congregation for the Faith issue a response, and not the Secretary of State nor any of his friendly journalists or theologians.”

The Open Letter to Bishops, published April 30, is a lengthy document that lists seven major statements that are to be found in Amoris Laetitia and in other papal documents and that the authors deem to be heretical. The authors also list names of prelates or others who are living or teaching against the Church's moral teaching and who have been either protected or promoted by Pope Francis, thus indirectly supporting a heretical atmosphere in the Church, as if the Church's teaching may be lightly ignored. Professor Rist was one of the 19 original signatories, but, that number has now increased to 92. The signatories of this letter ask the bishops of the Catholic Church to “take the steps necessary to deal with the grave situation” of a pope fostering heresy in the Catholic Church.

Professor Rist suspects that his suddenly being banned from the Pontifical Universities is due to his own signing of this Open Letter. He himself has explained the reasons why he signed this Open Letter in an interview with Vatican journalist Edward Pentin.

LifeSiteNews has launched a petition in defense of Professor Rist, asking the Augustinium to remove the ban from him and to restore his full rights as a long-standing scholar there.