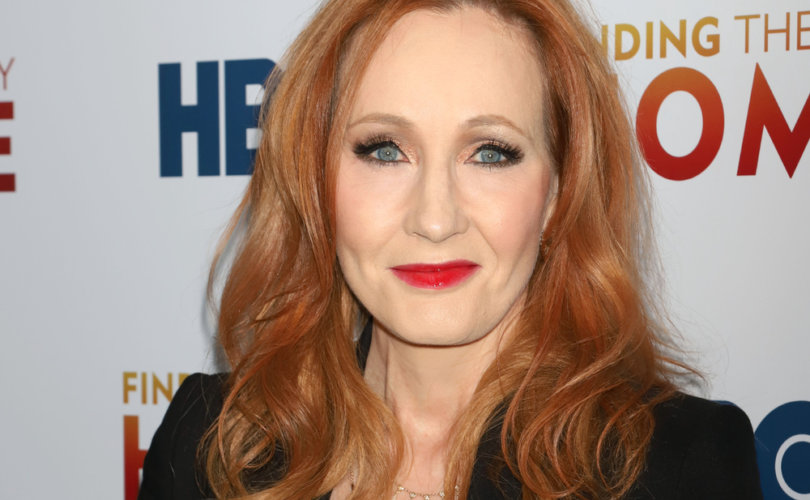 J.K. Rowling attends the premiere of "Finding The Way Home" at 30 Hudson Yards on December 11, 2019, in New York City.Shutterstock.com

June 1, 2020 (LifeSiteNews) – Early last year, I noted in a column for LifeSiteNews that billionaire Harry Potter author J.K. Rowling had done something exceptional: She had proven that the power of the transgender mob could be broken.

For those who missed the story at the time, Rowling had expressed her support for Maya Forstater, a woman fired for expressing her view that men could not become women by simply identifying as women.

“Dress however you please,” Rowling, who is pro-LGBT, tweeted. “Call yourself whatever you like. Sleep with any consenting adult who’ll have you. Live your best life in peace and security. But force women out of their jobs for stating that sex is real? #IStandWithMaya #ThisIsNotADrill.”

As the trans activists raged, LGBT groups offered to re-educate her, and columnists condemned her. Rowling simply ignored it all. She said her piece, and then let the waves of wrath roll and break without giving the activists what they wanted. Eventually, they were forced to quiet down and skulk away for fear that everyone would notice that for one of the first times, their attempts at blackmail had failed—because their target had refused to give in to them by quailing in fear and offering the required apology.

But even Rowling has her limits, and transgender LGBT activist Nicola Spurling discovered what they were after tweeting a link from the Guardian about Rowling’s new children’s book, The Ickabog. Spurling, who is a former candidate for Canada’s Green Party, captioned the tweet thusly: “Definitely something to keep a close eye on. In recent years, Rowling has made it clear that she can no longer be trusted around children.”

Rowling responded: “Unless you want to hear from lawyers, you might want to rethink that tweet. I’m not wasting time arguing with wilful misrepresentations of my views on transgenderism—your timeline shows you’re not big on truth—but making serious insinuations like this comes with consequences.”

Spurling at first attempted to double down, tweeting back: “If you feel that the transphobia you’ve put into the world is not dangerous to children you are more than welcome to have your lawyer send me a cease & desist letter. I’m sure the media would love to write articles about how you attack I trans folk and then try to silence them.”

Rowling responded: “Truth has always been far more important to me than clickbait, Nicola. Please provide your evidence that a) I can’t be trusted around children and b) that I ‘attack trans folks’.”

Spurling, of course, immediately referred back to Rowling’s only foray into the trans debate—her support for feminist Maya Forstater. “I’m also very much interested in the truth,” she shot back. “Tweeting support for someone who is indisputable [sic] transphobic is transphobic in and of itself. Suicide rates among trans people are so high due to lack of acceptance, hence transphobia is dangerous to children.”

Rowling, perhaps realizing the rabbit hole Spurling was heading down, cut it off: “I’m afraid your lawyers might need a little more than my tweet in support for Maya Forstater, who believes that humans are a dimorphic species, but who has stated her unequivocal commitment to treating trans people with respect. Again, I must ask you to provide evidence of your published claims that 1) I cannot be trusted around children and 2) that I have ‘attacked trans people.’”

Later that day, clearly noting that the thin ice beneath her was making dangerous noises, Spurling deleted the tweet and issued a new statement: “At the request of @jk_rowling and on the advice of my lawyers, I have deleted my original tweet. The tweet, when read on its own, lacked clarity and, right or wrong, wealth is powerful. With that said, I stand behind the intent of the tweet, which is to highlight the dangerous nature of transphobia. Children are particularly vulnerable and must be accepted for who they are, not told that who they are is wrong. With great power comes great responsibility.”

This little spat is notable not primarily because a world-famous author got angry enough to threaten a small-time transgender activist with legal action, although that is obviously interesting in and of itself. It is notable because it illustrates, once again, precisely how trans activists go after anybody who disagrees with them: By accusing them of being a danger to children. This is one of the worst things you can accuse anybody of, especially the way Spurling worded it. It carries the sinister implication that the person being accused is pedophilic in some way, and that implication is made very consciously. Trans activists are fully willing to smear the reputations of their opponents in the vilest terms possible. As long as it works, they’ll do it.

Spurling’s accusation is also notable because those who do not have the power and wealth and access to highbrow lawyers that Rowling has will also be facing similar accusations in the years to come. Parents who want their children to be at home will be accused of posing a danger to their own sons and daughters. Pastors who preach the Bible honestly will be accused of posing a danger to children. Christian school teachers, therapists, medical professionals, psychologists: If they do not believe what Spurling and the LGBT movement believe about gender, they will be labeled “unsafe” and “dangerous” and “not to be trusted.”

Instead, Spurling and the trans activists will advocate that the children will be entrusted to those who believe that puberty blockers, sex-change surgeries, and cross-dressing are the best thing for gender-confused children.