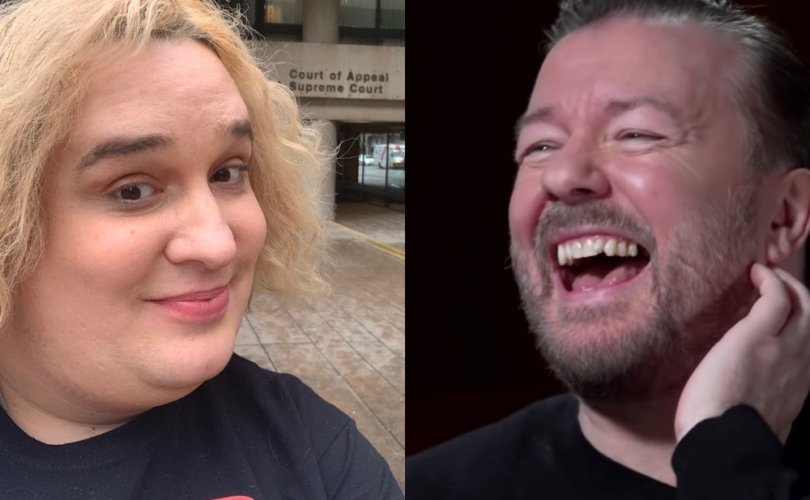 January 9, 2020 (LifeSiteNews) – Jonathan “Jessica” Yaniv, Canada’s infamous and delusional transgender activist, is up to his old tricks—namely, suing women for refusing to wax his genitals. Yaniv, who lost his previous case at the B.C. Human Rights Tribunal, apparently figured that he’d give the court a second chance to decide that he’d been horribly wronged by the largely-immigrant women who did not want to handle male genitals. Transphobia is transphobia, Yaniv has been telling anyone who will listen, and justice must be done.

You’d think that Yaniv would have been duly chastised by the first ruling, which didn’t note his creepiness. The ruling did, however, highlight his “animus towards certain, non-white, immigrants to Canada and, in particular, members of South Asian and Asian communities.” It also highlighted his strategy of targeting “small businesses” where he “manufactured the conditions for a human rights complaint, and then leveraged that complaint to pursue a financial settlement from parties who were unsophisticated and unlikely to mount a proper defence.”

Despite all of that, Yaniv has launched another complaint, this time, according to the Justice Centre for Constitutional Freedoms, “against a salon run by immigrant women who are of the Sikh faith.” She Point Beauty Studio in Surrey, B.C., rejected Yaniv’s request both because they serve female customers as well as for “religious, cultural, and safety reasons.” Yaniv is up to his old tricks again, but the media is still obediently playing along, calling this creepy man a “she” in all of their coverage of this fiasco.

But Yaniv seems determined to pick even more unwinnable fights.

During his last round of complaints against women who refused to handle his genitals, Yaniv’s story went viral, making a mockery of the transgender movement’s claims by handily exposing precisely where they lead us. Ricky Gervais, the British comedian who frequently addresses the transgender issue in his stand-up (he attracted much outrage from the LGBT community for his bits on Bruce “Caitlyn” Jenner), joined in, responding to one trans activist who insisted that those who didn’t want to service all customers should simply stay out of the waxing business entirely.

“Exactly,” Gervais sniped back on Twitter, “And if you don’t want to butter my b**** and put them between two slices of bread, don’t work in a sandwich shop.” Gervais has infuriated the transgender community simply because they have failed to cancel him no matter how many accusations they level at him, and his wildly successful Golden Globes gig highlighted the fact that they have been unable to dent his popularity. In fact, Gervais’s willingness to go after all sacred cows—including the thin-skinned transgender dogmatists with their new blasphemy laws—has probably helped his popularity rather than hurt it. Trans activists, for their part, are enraged because Gervais is giving people permission to do the one thing they hate the most: Laugh at them.

Gervais has also trolled Yaniv personally, tweeting a close-up photo of Yaniv’s face with the caption: “I was going to dress up as something weird and creepy for my Halloween party, but I’m bucking the trend this year and I’m going as brave female activist Jessica Yaniv. This also means I don’t have to wax my big old hairy b****.” Although even trans activists find Yaniv embarrassing, Gervais’s jokes implicate their entire worldview, and these tweets expose them to ridicule that is hugely damaging to their movement.

So now, in response to the news that Ricky Gervais will be coming to Vancouver, Yaniv tweeted out an article announcing the upcoming show with the caption: “No, @rickygervais I’m not allowing this.”

Yaniv managing to start a fight with Gervais would possibly be a worse-case scenario for the trans movement, and his declaration may just have landed himself a place in Gervais’s show come summer. Gervais has already proven that he doesn’t back down when people come after him, and attempting to cancel him will only invigorate him further and possibly trigger even further exposure of transgender insanity (Dave Chappelle has also taken time to mock many of their movement’s premises, and he too has ignored attempts to censure him for it.)

Jonathan “Jessica” Yaniv is a boon to those fighting transgender insanity because he so beautifully encapsulates what happens when you accept the claims of the trans movement. Yes, he’s kooky, creepy, and crazy, but that doesn’t mean that his assertions (of being a female, and thus in possession of a female penis) aren’t fully supported by the transgender movement. The more Yaniv stays in the public eye, the more he reminds people where we’re headed—and the more he picks fights with people like Ricky Gervais, the more damage he does to the trans movement.

Jonathon’s new podcast, The Van Maren Show, is dedicated to telling the stories of the pro-life and pro-family movement. In his latest episode, he interviews literature professor and pro-life activist Karen Swallow Prior about how literature is going to help end abortion.