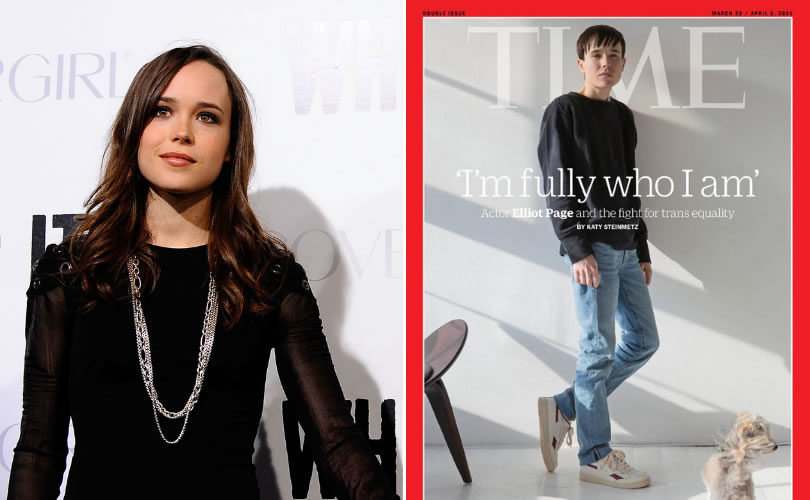 March 17, 2021 (LifeSiteNews) — On May 29, 2014, TIME Magazine published a cover story titled “The Transgender Tipping Point,” featuring Orange is the New Black actor Laverne Cox, a biological male identifying as a woman. The story was heralded as groundbreaking moment for the trans movement, and the cover itself was as much of a tipping point as the cultural shifts it described. Media coverage of this sort, much like political polling, is designed to shape public opinion as much as gauge it. Saying that there is a tipping point does much to make it so.

The just-released March 29 cover dedicates the famous red frame to the transgender movement once again. There is a photo of actress Ellen Page, hair cropped short, a mournful expression on her face, wearing a t-shirt and blue jeans. Page now identifies as Elliot and claims to be a male. Previously, Page had identified as a lesbian, and married a woman. They’ve since split.

TIME’s story was a glowing endorsement of Page’s latest coming out. Their story — as well as the stories covering their story published in nearly every Western publication — obediently called Page a “he,” and the saga was one of a butterfly emerging from a cocoon, if a butterfly came out with various body parts severed, discarded, and sewed back up. In Page’s case, she underwent what is called “top surgery” — a double mastectomy. “Healthcare” in the age of trans includes the amputation of healthy breasts, and if you question that, you’re a transphobe.

— Article continues below Petition —
Boycott American Girl: Tell Mattel to STOP pushing a lesbian storyline on children!
Show Petition Text
2290 have signed the petition.
Let's get to 2500!
Thank you for signing this petition!
Add your signature:
Show Petition Text

The cover story featured Page telling TIME that the surgery had rescued her from the “total hell” she’d suffered since puberty, and that she had been recuperating from the operation when she announced she was a transgender man back in December. According to TIME, the spiking rates of young people identifying as transgender is not a peer contagion as Dr. Lisa Littman described it, but rather the result of “increased social acceptance” — which TIME has done more than a little to facilitate. The author of the story even takes a stab at Abigail Shrier, author of the recent book Irreversible Damage, and feminist J.K. Rowling.

Page, who revealed that she struggled with anxiety and depression under the glaring spotlight of her Hollywood career, wrested with her identity by speaking with transgender authors; Laverne Cox, the previous transgender TIME cover icon, also gave her tips on becoming trans. She was particularly drawn to P. Carl’s memoir Becoming a Man. All of this, she told TIME, allowed her to allow herself to “fully become who I am.” For her, that meant a double mastectomy, and transforming herself into someone who looks like an incredibly vulnerable and sad-looking teenage boy. Less of herself made her feel more herself.

This cover story, like the hundreds of others it has already spawned, will continue the process of normalization for the trans movement. Ellen Page’s decision to surgically remove her breasts (she referred to herself, throughout the interview, as a “transgender guy” but also as nonbinary and queer) has been highlighted as a beautiful thing, a slightly more complicated version of coming out. But, TIME makes clear, questions are for transphobes—you either celebrate, or you shut up. There’s no room for inquiry here, and the media monolith is ensuring that those who do speak up are treated with contempt.

Looking at the photo of Ellen “Elliot” Page on the cover of TIME Magazine, one does not get the impression that a beautiful transformation has taken place. She says she found herself; she looks very much lost. Instead, she looks like someone who has endured a tragedy, or perhaps someone who is currently living through one. In many ways, she is — and that makes this entire story desperately sad.