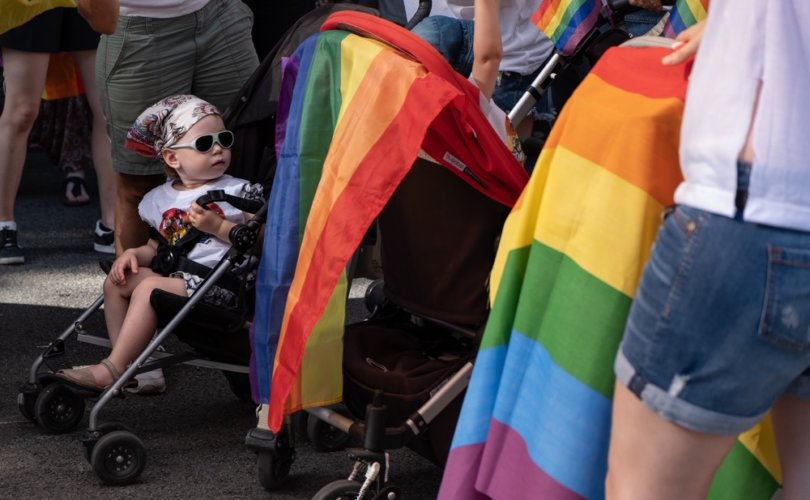 (LifeSiteNews) — As media outlets across the U.K. documented the growing recognition that “transitioning” children is incredibly dangerous, the Mirror published an article with the headline “Transgender model walks the New York Fashion Week runway at just 10 years old.” Here’s how it opens:

Meet Noella, the youngest transgender model to ever walk the runway in New York Fashion Week. At just 10 years old, Noella has hit the catwalk for Mel Atkinson, the designer behind Trans Clothing Company.

‘It feels good that I’m already inspiring trans kids to be themselves,’ said the mini model. Her parents Dee McMaher, 35, and Ray, 32, are incredibly proud of their daughter who began socially transitioning aged four.

Go head and re-read that. Noella – a biological boy – began transitioning at the age of four. His mother, an event director, is of course very proud of him. “Noella doesn’t ever get nervous or scared by anything. She’s [sic] a tiny professional! She was so excited to go down the catwalk, excited to see all the people and the cameras. She knows exactly how to work a crowd. We are so proud of Noella for being the first trans child in New York Fashion Week, we are in awe with her confidence and determination.”

Noella, of course, is a useful symbol for the transgender movement, which wishes to showcase a boy who “became” girl to enforce the idea that this is actually possible.

“Noella already has so many transgender people of all ages contact her for advice, support,” Dee told the media. “Noella is very outspoken and an amazing advocate for other trans kids. It’s great that she can provide this trans visibility on a global scale. She is showing them that trans is beautiful.”

Noella’s parents, fortunately, have not begun the process of medical transition, which they feel is too early – but they do say their son announced himself to be a girl already at the age of two and told a therapist he was a girl at the age of four. They thus decided to bring him to a gender clinic, legally changed his name to Noella at age seven, and began the transgender modelling career shortly thereafter. The novelty of being 10 and trans is, as you might expect, popular – Noella has bookings until November 2022. His mother says that the goal is to promote transgenderism.

“Noella is an activist for transgender rights and she wants to put herself out here,” said Dee. “For ten years old, she is very mature for her age and self assured. She wants to show other transgender kids that it is ok to socially transition and accept who they are. She is the first person to tell others that they are wrong when they are being discriminative. She is so passionate about raising awareness of transgender people—she is going to make a difference in this world.”

Now, when I write about the families that put their children who identify as transgender into the public eye and then claim their child is leading them every step of the way, many people ask why it matters. The answer is that children are being made symbols of a destructive ideology that is currently preying on the confusion of thousands of children, and that this matters. Gender dysphoria has become a mass peer contagion – even liberals like Bill Maher and Andrew Sullivan agree with that – and presenting a glittery, impossible vision of transgenderism as the path to happiness is dangerous.

In this particular case, there is much more to the story. As Reduxx reported:

Dee McMaher, Noella’s biological mother, is a social justice advocate who identifies as non-binary, appears to be on hormone replacement therapy, and recently had a cosmetic mastectomy. Both she and her current partner are females who identify as trans masculine. According to the Point Foundation website, McMaher, neé Kalick, has been an “advocate and educator” for transgender children for 10 years — roughly since around the time Noella was born. In 2019, McMaher and Noella were featured in People’s World during a legal episode in which McMaher was fighting for full custody of her child from her biological father, Timothy McCord.

In short, this little boy began transitioning right around the time one of his parents began a career as an “advocate” for “transgender children” — and both parents identify somewhere on the gender “spectrum.” You’re telling me that had nothing to do with the fact that a little boy “decided” to be a girl at two years of age?

It is also utterly irresponsible for parents to turn their children into public activists for causes they cannot possibly understand at their age, and we are just starting to understand the misery many of these children will endure later on as de-transitioners come forward and tell their stories, with their fertility and capacity for sexual pleasure destroyed before they were old enough to drive a car or buy a drink.