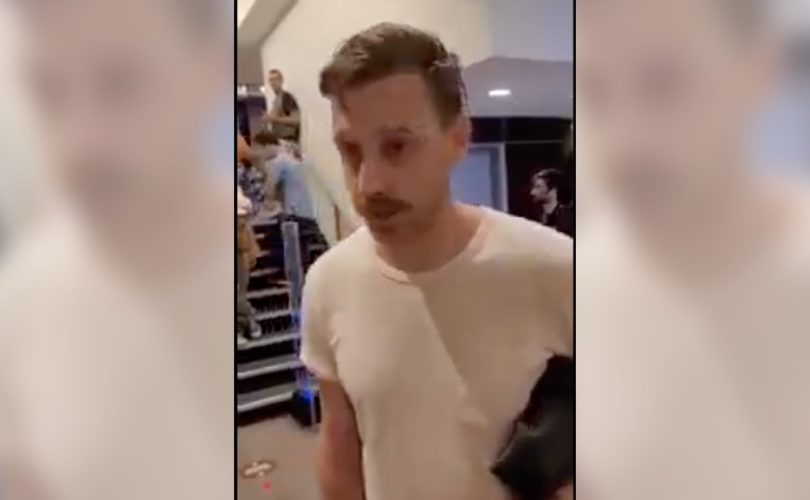 LOS ANGELES (LifeSiteNews) – Progressive activism goes through three stages. The first is: That never happens, bigots! The second is: You are using an isolated outlier to make a bigoted point! And the third is a combination of the Law of Merited Impossibility—it won’t happen, and when it does, you bigots deserve it—and a complete memory-holing of everything that was previously said. Events inconvenient to the current narrative simply didn’t happen.

A recent altercation at the Wi Spa in Los Angeles’ Koreatown falls into the last category. Some of you may remember that in June, several videos of a furious Hispanic woman confronting spa employees went viral. A man had entered the female side of the spa, and she wanted to know why it was okay for him to “show his penis around other women, young little girls, underage—your spa condones that? Is that what you’re saying?”

The employee confirmed that under California law, that was the case. When an employee (and one woke male customer) attempted to educate her, the woman lost her temper: “I see a dick! It lets me know he’s a man! He is a man! He’s not no female. He is not a female…So Wi Spa is in agreement with men who just say they are a woman can go into the women’s section with their penis? Is that what you’re saying?” She turned scornfully to the woke customer. “It must be hard not to be a real man.”

Trans activists and their allies in the mainstream media recognized immediately that these videos were a problem. A Hispanic woman speaking truth in such blunt language needed to be neutralized, and the media promptly reported on her supposed bigotry. The consensus was clear: This “transgender woman” had been victimized, and the person who objected to “her” presence needed to be educated.

The Los Angeles Times outdid itself, noting in an editorial that while trans rights are “fortunately gaining acceptance in many corners…society’s recognition of basic rights for one group also sometimes causes clashes with other groups that have been marginalized or disempowered.” That said, there was only one proper response to this woman’s complaint: “There is no doubt that Wi Spa did the right thing in defending the right of a transgender customer to be nude in the women’s area, even though the sight of male-appearing genitalia discomfited at least one female customer, who complained at the front desk.”

Male-appearing genitalia. That is how one of America’s most prestigious newspapers refers to a penis. That is gaslighting at its finest.

I do hope the LA Times is prepared to publish a groveling apology. The transgender person, now identified as Darren Agee Merager, has been charged by the LAPD with four felony charges of indecent exposure. He is, of course, insisting that this is “transgender harassment”—but new facts have emerged indicating that it is the media that needs re-education, not the clear-eyed woman they patronizingly condemned for her “transphobia.”

One of those facts, reported by the New York Post, is that 52-year-old Merager “is a tier-one registered sex offender” with a long rap sheet. (Tier One requires the offender to be registered for ten years.) The police have not offered many details beyond confirming that an investigation is “ongoing,” but a warrant has been issued for Merager’s arrest in LA Country. Merager had previously claimed that the woman who had complained, going by the handle “Cubana Angel,” had simply been spewing “a bunch of garbage and lies.”

But the garbage and lies appear to have been spewed by Merager, who was also convicted in 2008 for failing to register as a sex offender and has been convicted at least twice of indecent exposure in the past, in 2002 and 2003. Merager is also, according to the NY Post, “facing six felony counts of indecent exposure over a separate locker room incident in December 2018,” in which he is accused of exposing himself to women and children in the changing area of a pool in West Hollywood Park. The LA County Sheriff’s Department bluntly states that “Merager claims to identify as female so he can access women’s locker rooms and showers.” This is something we were assured simply could not happen.

Merager’s response, of course, is predictable: He’s running to pro-trans California lawmakers such as Scott Wiener, who has made LGBT issues his career.

What will the media do now? Will the Los Angeles Times publish an editorial admitting that perhaps “Cubana Angel” had a point when she decided to believe her lying eyes over transgender propaganda and point out that the “male-appearing genitalia” was a penis and that the women and young girls in the spa were the victims of indecent exposure? Will they note that any sane person recognizes that allowing biological men with male genitalia into female-only spaces (once the plotline of porn and campus comedies) is ensuring that this sort of abuse will happen? Will the media note that female-only spaces are important to keep women safe?

Of course not. This story, in which the “transphobes” were proven right once again in every single detail, will be memory-holed. Women and young girls are collateral damage, and if the occasional serial sex offender makes it into the female locker room of a spa, that’s just the price of progress.