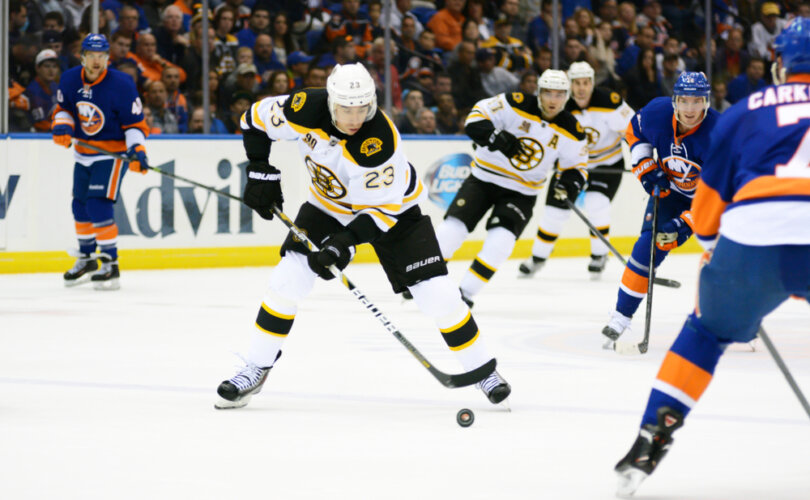 (LifeSiteNews) — On November 22, the National Hockey League (NHL) had an announcement:

The NHL is proud to support this past weekend’s Team Trans Draft Tournament in Middleton, Wisconsin. This was the first tournament comprised entirely of transgender and nonbinary players, with around 80 folks participating! #HockeyIsForEveryone #NHLPride pic.twitter.com/OfEoAVXtH5

One of the first replies summed up much of the reaction:

So, men playing on womans team?

The NHL was swift to respond:

None of that, of course, actually means anything. As Matt Walsh memorably put it: “What is a woman?”

If a woman is merely an identity to be donned and discarded at the whim of those who wield it, and is only incidental to biological reality, then what is someone identifying as if they are calling themselves a woman?

As for nonbinary identity, it has to be the most unsophisticated boondoggle yet perpetrated by the LGBT movement. If one is neither male nor female, can he or she merely select whichever team they feel like playing on? As Douglas Murray noted, there is very little difference between identifying as non-binary and shouting “Look at me! Look at me!”

There is something grimly funny about the professional sports world bending the knee to the transgender flag. Sports leagues are reservoirs of machismo and aggression, and one wonders what the meatheads playing for the NHL think about their organization’s role in going proudly queer. Sports leagues can no longer be about sports any more than a bank can simply be about business transactions—everyone must participate in the cultural revolution, and everyone must do their part to ensure that our society’s new values are promoted.

This was perhaps encapsulated best by the recent viral remarks of FIFA President Gianni Infantino, who took questions from reporters in Qatar recently. The FIFA World Cup is being held there, and Infantino has been distinctly underwhelmed by the criticism FIFA has been facing for choosing a country with such an abysmal human rights record. Solemnly, ponderously, Infantino responded in what he apparently felt was a decent imitation of Martin Luther King Jr.: “I feel gay.” He did not say if he also feels pretty and witty.

Further, Infantino noted, criticisms of Qatar are out of line for those of his pigmentation. “I am European,” he said obviously. “For what we have been doing for 3,000 years around the world, we should be apologizing for the next 3,000 years before giving moral lessons.”

Regardless of how gay Infantino feels, fans wearing rainbow jerseys have been stopped by security guards attempting to enter the World Cup stadium and told to take them off or be denied entry. As one Qatari responded—and there were thousands of similar tweets: “As a Arabi I’m proud of what happened. I don’t know when will the westerners realize that their values aren’t universal. There are other cultures with different values that should be equally respected. Let’s not forget that the West is not the spokesperson for humanity.”

As a Arabi I’m proud of what happened.
I don’t know when will the westerners realize that their values aren’t universal. There are other cultures with different values that should be equally respected.

Let’s not forget that the West is not the spokesperson for humanity. https://t.co/F9jQjnq3Jf

Perhaps Infantino would like to apologize on behalf of the West again.