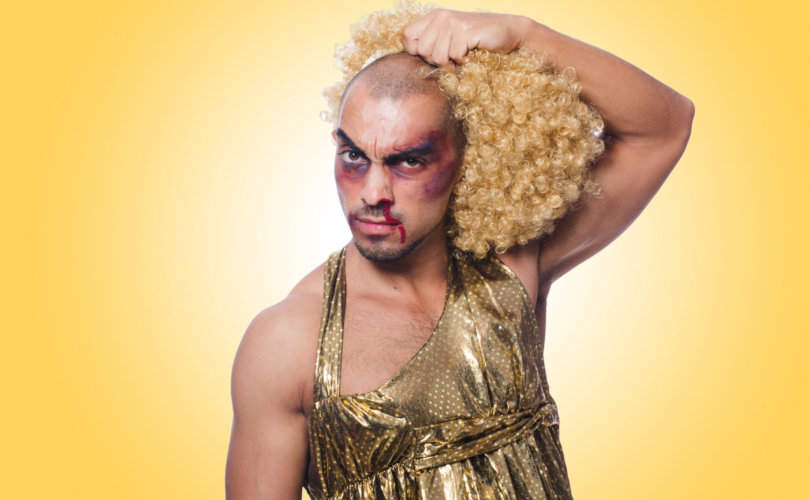 June 22, 2017 (LifeSiteNews) — These days, it seems, the trans activists are everywhere. There was the “pregnant dad” guy who announced that he and his gay partner were going to have a child, chatting with several media outlets about the difficulty and discrimination he faces as a “pregnant man,” which the rest of us will have to be forgiven for pointing out is not a thing. There was Ontario’s Bill 89, which some critics warn could result in government officials removing children from Christian homes if they do not show adequate enthusiasm for the current gender ideology of the idiot elites (The best analysis of this bill I’ve seen so far is Andrea Mrozek’s essay in Convivium.) And then Bill C-16 passed on the federal level, against the warnings of academics like Dr. Jordan B. Peterson, who pointed out that the legislation was a dangerous attack on free speech.

While critics dismissed those who pointed out that people could actually be prosecuted for hate crimes if they refused to use recently-invented pronouns demanded by radical activists, the truth is that they are lying and they know it. Trans activists like Nick Matte, a lecturer in “transgender studies” and the Victim-In-Chief who accused Jordan B. Peterson of actual violence simply for questioning his bizarre ideas, are dangerous drama queens who fully intend to use the law to silence their opponents. After all, once you have reclassified dissent as violence, criminalizing and prosecuting such violence is the next logical step. As Bruce Pardy put it over in the National Post, this is nothing more than a fundamental re-conceptualizing of what human rights are, with trans activists using them to force people to say words they do not want to say and wielding them like a bludgeon.

It’s not just conservatives (and normal people who think the idea that a man can get pregnant is insane) who have concerns. Feminists warned that this bill could threaten female spaces, hastily clarifying that they meant spaces free of penises. Members of the Vancouver Rape Relief and Women’s Shelter spoke up, saying almost pleadingly that surely people could see the difference between biological women and men who claimed to be women. But many feminists are now considered to be enemies, and in the twisted worldview of guys like Nick Matte, I’m sure that they are “violent,” too. One recent story that showed just how far trans activists are willing to go was their protest at the “no penises” policy of a Toronto women’s spa.

Trans activists could not care less about how comfortable women and girls, including victims of sexual assault, are in facilities designated for their use. The feelings and fears of girls everywhere are immaterial to them: these “bigots” are simply in need of re-education, because society must be reshaped to suit the delusions of a tiny minority. If girls don’t want to see penises in their change room, they’ll just have to get over it. Trans activists are just getting started, as Brenda Cossman, the director of the Mark S. Bonham Centre for Sexual Diversity Studies noted in the Globe and Mail after the passage of Bill C-16:

From driver’s licenses to gender assignment on birth certificates, we need to fundamentally re-imagine the relationship between sex and gender. We need to move forward and join the growing number of countries that have legislated a right for gender self-determination. In 2012, for example, Argentina pioneered the first law for gender self-determination, allowing individuals to self-determine their gender identity and obliging government to respect this, including in its official documents (such as identity cards) and the health-care system (by providing free access to gender-affirmative medical care).

There it is in black and white, ladies and gentlemen. When Cossman says that “we” need to fundamentally re-imagine the relationship between sex and gender, she means you, too. You are required to believe that men can breastfeed. You are required to grit your teeth and smile when you are told that a person with a penis can change in the same bathroom as your young daughter. You must shake your head sorrowfully when you are informed that “transphobia” is running rampant because so many guys don’t want to date “girls” with male genitalia. You must be fervently in favor of giving hormone blockers and perhaps even genital mutilation to children, who in the world of trans activists are not old enough to vote or buy beer but are old enough to make a decision that will irreversibly transform their identity.

Trans activists are constructing the legal framework for a brave new world. The media and most of the politicians have already fallen obediently into line. Be prepared to have insanity foisted on you with a ferocity only those who desperately need the approval of others can muster.