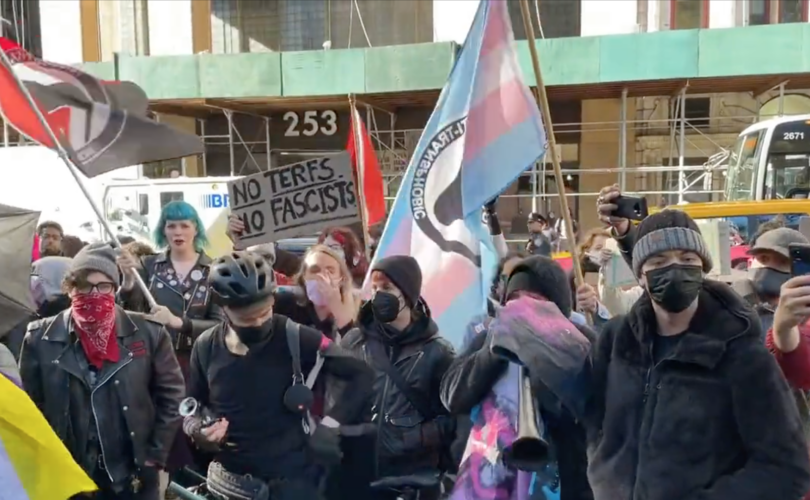 (LifeSiteNews) — If the mainstream press is to be believed, the transgender movement is the greatest human rights movement of our time, eclipsing and replacing both the feminist movement and the gay rights movement.

Thus, you will not, for example, read headlines like these from the dissident feminist site Reduxx:

The reason I highlight these stories is because the media is almost completely ignoring a very real trend in which males identifying as female harass, physically threaten, and assault women who disagree with them. In many cases, these women are “gender-critical” feminists who refuse to accept the idea that men identifying as women are women; in the United Kingdom, these feminists are largely leading the charge against gender ideology.

In fact, in the United States we have seen Antifa joining forces with trans activists. Andy Ngo, a reporter for The Post Millennial, noted that the black-clad thugs in New York City declared that opposing transgender ideology is akin to fascism – the shocking video footage (which we’ve provided a link for, but have chosen not to embed on our site) shows one Pride organizer screaming at the women: “I’ll beat your ass, bitch!”

I’m sure we can all agree that if anything like this happened in front of an abortion clinic it would be headline news ­– especially if a predominantly male mob bent on violence surrounded a bunch of women and called them misogynist names. Violence than can be cast as a conservative/pro-life/Christian against a feminist/LGBT/all-around-virtuous person is prime six o’clock news material.

But there is an exception to the “if it bleeds, it leads” rule – and that is when the attackers are men identifying as women. Trans activists are one step up the oppression hierarchy, despite the fact that the reality on the ground is dudes in drag beating up and threatening women. If those women bleed, the story can be ignored or mischaracterized. In the age of transgender, they’re the wrong kind of woman.

When these stories are reported, the media acts as a functionary for the transgender movement by obediently accepting all of their premises– the very premises, incidentally, that are sparking these clashes between women and mentally ill men in lipstick in the first place. Thus, the story ends up being framed as if it is a catfight – a bunch of women who flew at each other over an ideological difference of opinion. And the real women are the bigots for refusing to recognize the fundamental right of their hairy-legged sisters to share their private spaces. Worse, male sex predators who decide to identify as female are presented by the press to the public as women, with clunking, awkward prose explaining that the mugshot of the evil looking bruiser was a photo of a woman who had used “her penis” to assault “another woman.”

While the media constantly insists that there is an epidemic of transgender people being murdered (there isn’t), the real trend is violence against women because of their beliefs. That story, however, cannot be reported on – because the media cannot admit that the brawny fellows clobbering the ladies aren’t ladies, too.