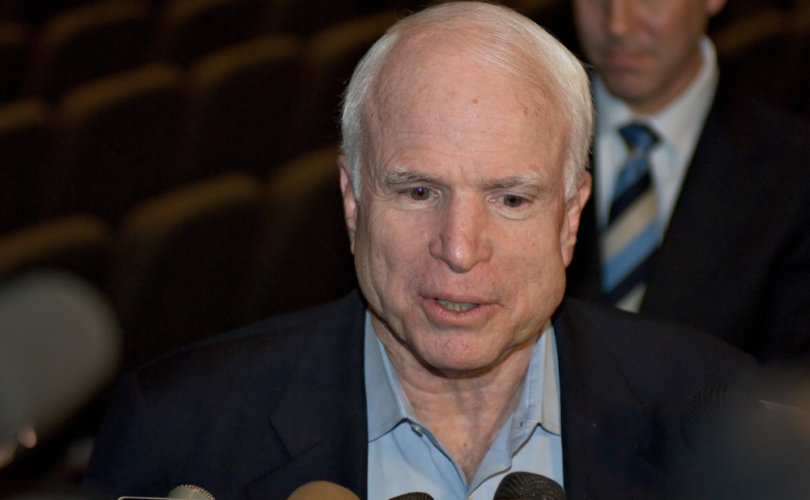 WASHINGTON, D.C., July 28, 2017 (LifeSiteNews) – There’s a sardonic line that experienced, often jaded conservatives use to describe formerly principled Republicans who cast aside key tenets of their party’s platform to embrace liberal positions, to the delight of liberal media types and Democrats everywhere.

“Wow, look how [fill name in here] has grown,” goes the line, which sadly has been uttered many times by veteran politicos on the Right in recent decades to describe GOP sellouts who abandon their campaign positions to suck up to reporters and the Beltway’s dominant liberals.

So let me just say, on LGBTQ issues: Wow, look how Senator John McCain has grown.

What is newsworthy, at least to those who support the conservative GOP platform, is that Sen. McCain is now avidly defending the supposed “right” of severely gender-confused (“transgender”) people to serve in the U.S. Military. Strangely, this is the same McCain who once led the opposition to Obama’s crusade to “homosexualize” the military, as seen in this 2010 Senate floor speech.

Obama and the Democrats won on “gays in the military” and, until Trump came along, they were well on their way to winning on gender confusion. Congress voted in 2011 to end the ill-conceived “Don’t Ask, Don’t Tell” compromise policy, thus enabling open homosexuals to serve in the military. As a result, today’s Pentagon, even under Trump, celebrates “LGBT pride” and dishes out politically correct pablum to indoctrinate our troops in “gay” groupthink.

On Wednesday, after Trump shocked Washington by tweeting out his new “transgender”-free military policy via Twitter, McCain issued a statement blasting the president, which included this passage:

Any American who meets current medical and readiness standards should be allowed to continue serving. There is no reason to force service members who are able to fight, train, and deploy to leave the military—regardless of their gender identity. We should all be guided by the principle that any American who wants to serve our country and is able to meet the standards should have the opportunity to do so—and should be treated as the patriots they are.

That is a far cry from Sen. McCain’s impassioned 2010 speech on the Senate floor against open homosexuality in the Armed Forces. Here are a few excerpts:

This debate is not about the broader social issues that are being discussed in our society, but what is in the best interest of our national security and our military during a time of war….

Distractions cost Marines' lives….Marines come back after serving in combat and they say, ‘Look, anything that's going to…potentially break that focus and cause any kind of distraction may have an effect on cohesion.’ I don't want to permit that opportunity to happen….

I've heard from thousands of active-duty and retired military personnel… and they're saying, 'Senator McCain, it isn't broke, and don't fix it.'

I hope that when we pass this legislation [allowing open homosexuals in the military] that we will understand that we are doing great damage and we could possibly, and probably–as the Commandant of the Marine Corps has said, and [as] I've been told by literally thousands of members of the military–harm the battle effectiveness which is so vital to the survival of our young men and women in the military.

The old John McCain makes a lot of sense and we should apply his wise warning to the current liberal obsession over “transgender” service in the military, despite (as McCain put it then) “all this talk about how it's a civil rights issue and equality.”

Fast forward to McCain’s current, politically correct statement against Trump. After touting “gender identity” rights, McCain approvingly cited the Department of Defense’s study of the transgender policy’s effect on military readiness and said, “I do not believe that any new policy decision is appropriate until that study is complete and thoroughly reviewed by the Secretary of Defense, our military leadership, and the Congress.”

The problem with that is the Pentagon’s review process is bureaucratically stacked in favor of continuing the military’s experiment of accommodating gender confusion. Credit that to Obama, who transformed the Pentagon (and the State Department) into a giant incubator of political and sexual correctness—even appointing the first openly “gay” service branch chief, Army Secretary Eric Fanning, who predictably worked with fellow LGBT activists to successfully push for “transgender” service.

Unfortunately, history shows that liberal pseudo-“rights” and taxpayer-funded benefits are hard to take away. In fact, 23 House Republicans recently helped Democrats defeat a DoD spending bill amendment that merely would have stopped taxpayer funding of Pentagon transsexual “sex reassignment surgeries,” which are so gross I cannot describe them here.

I wonder: where was Sen. McCain when Barack Obama was catering to the gender rebellion lobby as the next step in the Left’s fanatical quest to use government to create “rights” based on sexual perversion? Why were there no Senate (or House) hearings exposing Obama’s sop to the gender-confused in the military? (In June 2016, McCain, sounding more conservative in his run for re-election, promised such hearings but never delivered.)

Why did McCain help sink Trump’s nominee Army Secretary, Tennessee State Sen. Dr. Mark Green, after the Left twisted the words of this Christian conservative Army veteran to demonize him? (McCain stoked the LGBT Lobby’s scurrilous yet successful campaign to sink Dr. Green’s nomination by calling the latter’s comments “very concerning” rather than coming to his defense.)

Trump gets results. What a concept.

Sen. McCain’s social liberalism, like that of so many feckless Republicans, mocks the GOP platform. All this only makes Trump’s bold “transgender” move, if he follows through, that much more of a big deal. Trump is reversing leftist social gains, which is rare and precisely what most defeatist Republicans are loathe to do.

Such worldly compromises, big and small, explain how America and the West arrived at this twisted and depraved “transgender moment.” Moral relativism, always churning against biblical Truth, forever inviting new, once-“progressive” fads and mores into the “mainstream,” incrementally advances the Left’s War on Normal.

Meanwhile, conservatives mostly just complain and move on: “Kvetch and Retreat,” in the words of Orthodox Rabbi Mayer Schiller, who has witnessed more than his share of “conservative” sellouts. The Left plays offense, and we play a very poor defense. After just a few decades, once religiously faithful countries like the United States and Canada become morally weak and functionally pagan, as even our clerics defend the Sexual Revolution, socialism and open borders–in the name of love, justice and compassion, of course.

Too often in Washington—and in corrupt capitals across America—political “growth” and sophistication signal moral cowardice and corruption. Our hearts and prayers go out to the ailing Arizona senator, but it is exasperating and disheartening to behold self-described Republican “conservatives” like him and Sen. Orrin Hatch (R-Utah) criticizing Trump for a refreshingly bold move that will restore some moral and sexual sanity to the military.

I wish John McCain’s liberal “growth” were an aberration among Republicans in D.C., but it’s not. The party’s gradual capitulation to the LGBTQ revolution (and the Democrats’ before that) is proof. A return to honoring Jesus Christ first in our lives, above politics and shallow, sinful cultural trends, is the only way back to truly “making America great again.”