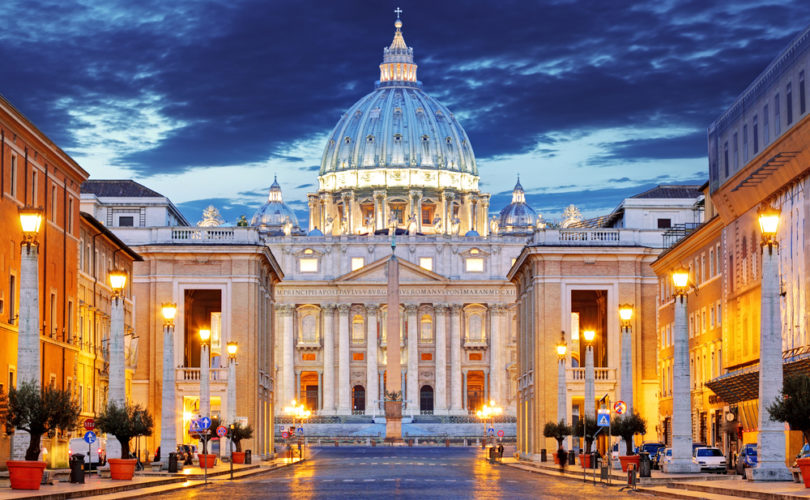 If it is a 'translation error,' as we are politely calling it, it seems a rather extraordinary coincidence that it should be such a significant omission.Shutterstock

Just at first glance, and without looking it up on Google Translate, what is the difference between these two passages of a recent important Vatican document, the final “Relatio” from October’s Extraordinary Synod of Bishops?

“…facing the situation, with an eye on the Lord Jesus, to discern how the Church and society can renew their commitment to the family.”

A little pared down, perhaps? The official Italian original says, roughly, “…facing, in the light of the Lord Jesus, [how] to discern the ways in which to renew the Church and society in their commitment to the family based on marriage between a man and a woman.”

That last little bit does seem rather significant, doesn't it? Especially so, given the general tenor not only of the international secular media’s take on the Synod, but of what we know of the conflict within the Synod aula itself. There can be no doubt that in that tumultuous two weeks, there was a battle over attempts by the “progressivist” wing of the bishops to do whatever possible to water down the meaning of Catholic teaching on the nature of the family. There can also be no doubt that those efforts were quickly expanded to include an attempt at changing the definition of the family to include same-sex partnerings.

If it is a “translation error” as we are politely calling it, it seems a rather extraordinary coincidence that it should be such a significant omission.

We will, no doubt, hear shouts from all directions saying it was just an oversight, a clerical error perhaps. But that seems hard to believe.

Let us look at the whole paragraph, the fourth of the introduction, so we don’t lose the context:

4. With these words in mind, we have gathered together the results of our reflections and our discussions in the following three parts: listening, looking at the situation of the family today in all its complexities, both lights and shadows; looking, our gaze is fixed on Christ to re-evaluate, with renewed freshness and enthusiasm, what revelation, transmitted in the Church’s faith, tells us about the beauty and dignity of the family; and facing the situation, with an eye on the Lord Jesus, to discern how the Church and society can renew their commitment to the family.

If you know even a little Italian, you can see that until we get to the last portion of this very long sentence, the English version is almost word-for-word. Until it makes the rather hot-button point that we in the Catholic Church define both the family and marriage in one way only.

I contacted someone in the Vatican press office asking what the procedure is for the various documents of the Synod. How are they to be disseminated throughout the Catholic world to the bishops? I wanted to know if the bishops would receive this document in some other official form, perhaps with a corrected translation, or if their secretaries were going to be reduced to looking it up on the Vatican website like the rest of us. But no one seemed to know.

It was vaguely intimated that “I suppose” the nuncios would be taking the final relatio, as well as the mid-term document and the summaries of the small-group discussions, to be distributed to the bishops of each country. Or maybe it was going to be the heads of the national conferences, who were in attendance.

Calls to the Synod office itself to ask whether this error were going to be corrected, went unanswered.

It seems odd, given the massive attention the issues received at the Extraordinary Synod of Bishops in Rome last month, that the mainstream secular media has largely missed the news of this omission, which has made the rounds on some of the Catholic blogs and online magazines. The dominant language of the world’s media, particularly on the Internet, is English. And given the near continuous uproar around the western world over changing the definition of marriage to include same-sex partners, a document produced by the Vatican on marriage in English is going to be extremely newsworthy.

Moreover, this wasn’t was not the only “translation error” that was made during the process of the Synod. In mid-stride, after the very vocal denunciation by some of the Synod bishops of the mid-term Relatio, the English version of that document was changed. A passage that called for the Church to “accept and value” the homosexual “orientation” was changed to speak of  “providing for” homosexuals rather than “welcoming” them.

It seems apparent that some shenanigans are still going on with regard to the very problematic documents of this very problematic Synod. But what end is being sought is anyone’s guess. Who made the change from the Italian version to the English version? Who, if anyone, authorized it? Is there yet another version that is not being made available to the public that bishops will see? Who is responsible for approving Synod document translations? Is it the Synod administrator, Cardinal Baldisseri? Is it the obviously beleaguered Fr. Lombardi, the head of the Holy See Press Office? Getting accurate answers to these kinds of questions is like pulling hens’ teeth.

If it was a deliberate omission, an attempt at deception, who on the inside would imagine that no one was going to make a comparison? And which group of Catholics is being targeted? Are we, those the media calls “conservative” Catholics supposed to be influenced by it? Are we supposed to forget what Church teaching is? Or perhaps it is an effort to appease the Church’s secular enemies, to refrain from reiterating it in the language it is most likely to be read by secularist and homosexualist activists? Who knows?

Robert Royal, president of the Faith & Reason Institute in Washington, D.C. who was in Rome for the Synod and gave some very sober and intelligent commentary, commented yesterday that taken as such, these errors are baffling: “We might have expected it to have been carefully worked up and vetted at the very highest levels.”

“The Vatican currently says it wants to be very transparent and open in its dealings – a debatable approach for an institution like the Catholic Church – but it would really serve those goals if the responsible figures explained what happened in this instance,” Royal wrote on his website, The Catholic Thing.

Royal also noted that the omission is “plenty controversial,” adding that it was so much so, the translation was “taken down for a while,” though it has returned unchanged.

He added that he can easily forgive minor errors, “especially in a difficult or long text,” but that “such an omission could have occurred and that someone in authority to review the text could have let it go out with that omission seems more than a momentary lapse.

“It’s either serious negligence in dealing with a highly sensitive point or a deliberate softening of the text.” Indeed, there do not seem to be many other logical possibilities.

It is details like this that reveal the chaotic state of the administration of the Church at the highest levels right now. Reports that the Vatican machinery in general is in a state of “chaos” and that the Synod has severely damaged the prestige of the papacy among the world’s bishops, continue to be common coming out of Rome, both in the Catholic media and through the ever-swirling rumour mill. Certainly “chaotic” is how the person I spoke to at the Vatican the other day described the situation with the next steps in the Synod process, the preparation for next year. Pressed for details, he merely shrugged, saying, “It depends on Cardinal Baldisseri. My guess is they don’t know.”

Another commented that the Synod was a “huge set-back” for Pope Francis’ governance, and that he has lost much of the personal prestige – as well as the benefit of the doubt among Catholic laity and the bishops – he has gained since his election. “The curia is divided and confused, and the College [of cardinals] is openly campaigning for the next Conclave.”

Robert Royal summarized, that there is a “simpler explanation” for such an odd rash of such “errors.”

“Among the current uncertainties in the Church, the ‘mistranslations’ have all leaned in the last two years in the direction of progressive views. That certainly tells us something,” he wrote.